The US Dollar is the top performer in the overnight session as it appears that confidence among investors seeking high beta currencies and risk-correlated assets is starting to wane. With no major data due out overnight (see: DailyFX Economic Calendar for Wednesday, April 17), there’s a bit more credence to the breakdown in risk appetite occurring (this being an organic sell-off driven by sentiment rather than spurred by a miss in major data, like the reaction seen in the Australian and New Zealand Dollars after the 1Q’13 Chinese GDP was released on Monday). Nevertheless, there were two noteworthy items worth discussing.

First, the Bank of England April meeting Minutes showed that the Monetary Policy Committee remains divided on how to best help the economy, with Governor Mervyn King outvoted for the third consecutive meeting by a count of 6-3 on the issue of increasing the central bank’s QE program. I believe this is a clear sign that no new policy measures will be announced before Governor Mark Carney takes over in July; and the likelihood of new measures decreases as July approaches. The Minutes made clear that additional QE will be contingent on a further erosion in data, which quite frankly hasn’t occurred the past few weeks. If anything, the BoE’s Minutes should present themselves as a mildly bearish catalyst in the short-term.

Second, the German 10-year note auction this morning produced the lowest yield ever accepted, at 1.280%, Relatively speaking, this shows a markup in price from the previous auction, at which the notes were sold for 1.500%. In context of the higher bid-to-cover ratio (demand increased from the previous auction at 1.56 versus 1.51), it’s evident that European investors’ risk appetite is shifting and they are indeed displeased with recent events out of Cyprus. Over the past several years, it should be noted that softer German bond yields portend to a weaker Euro. 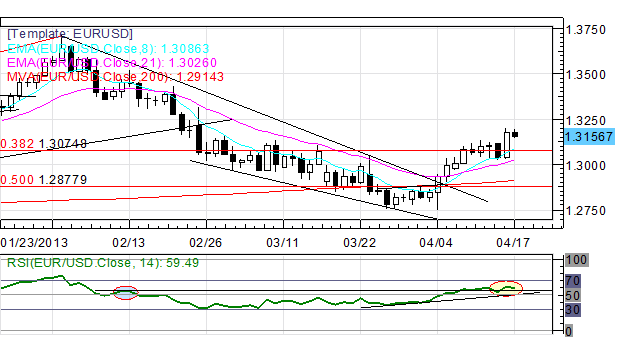 EURUSD: After stalling for several days at the 38.2% Fibonacci retracement from the Jul’12 low to the Feb’13 high at 1.3075, the EURUSD has surged to its highest level since February 25, when the inconclusive Italian election results were announced. Today, however, is seeing a pause in the breakout from yesterday, as an Inside Day is forming. Accordingly, further upside should be capped by 1.3200/05, at which point 1.3245/325 should be a major zone of resistance above. Declines should be supported by the 8-EMA at 1.3080/85, and given retail sentiment, we expect the EURUSD rally to continue. 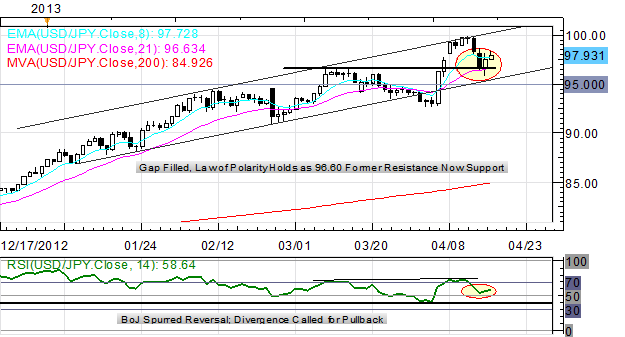 USDJPY: On Monday I said: “After the USDJPY cleared the descending trendline off of the March 12 and March 20 highs, at 95.00/15, price sky rocketed right up to the topside rail at 99.30/55…While topside risks are still in play…price action or a move to fill the week’s opening gap are possible. Accordingly, dips into 97.50 and 96.60 are look to be bought on pullbacks.” An Evening Star candle cluster – a bearish reversal pattern – materialized on Friday, with further downside pressure today. Accordingly, I’m watching 96.60 as the ideal level to begin building longs again.” 96.60 has held, and price has rebounded back to 97.93. 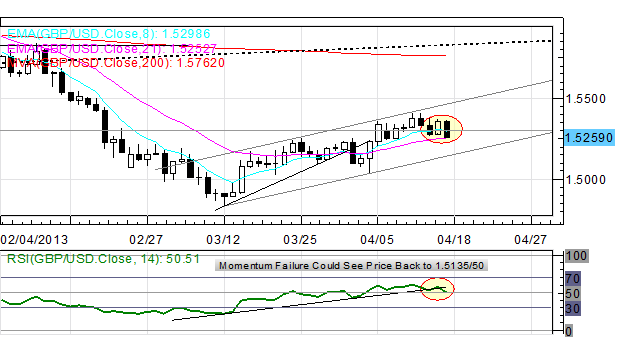 GBPUSD: Monday I said: “While the Bearish Rising Wedge move proved to be a fake out, an upward sloping channel has materialized off of the early-March lows. Recent price action from last Thursday suggests a pennant may have formed on the 1H and 4H time frames, with a test of 1.5440 due by Monday. I remain long-term bearish, but for now, I am neutral.” Price did not achieve 1.5440 on Monday and closed below 1.5320, and confirming my assertion that “the ascending daily RSI trend dating back to the early-March low [should break], opening up the floor for a downside move towards 1.5245/50 and 1.5135/50.” 1.5245/50 was touched earlier today, and suggests that downside momentum into 1.5135/50 should continue. 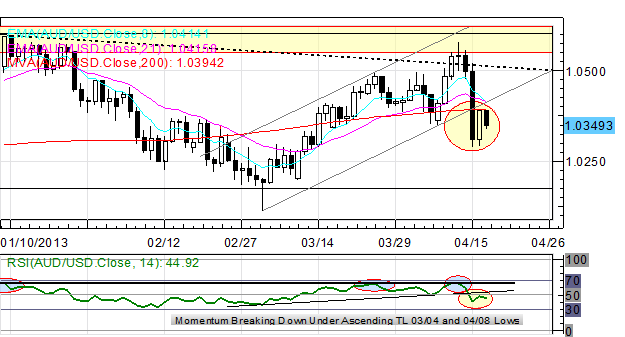 AUDUSD: Channel support off of the March 4 and April 8 lows at 1.0390/400 broke after another rejection at 66 in the daily RSI suggests that another period of weakness could be beginning. The retest of 1.0390/400 failed as well (a healthy retest), allowing the uptrend in daily RSI to remain broken as well. Now the 8-/21-EMA structure is compressing and close to flipping bearish. I’m neutral, but looking short now. 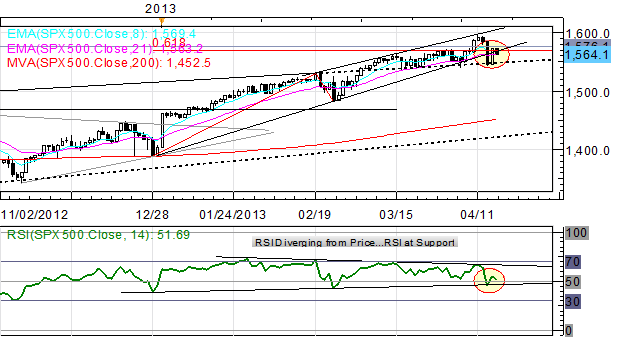 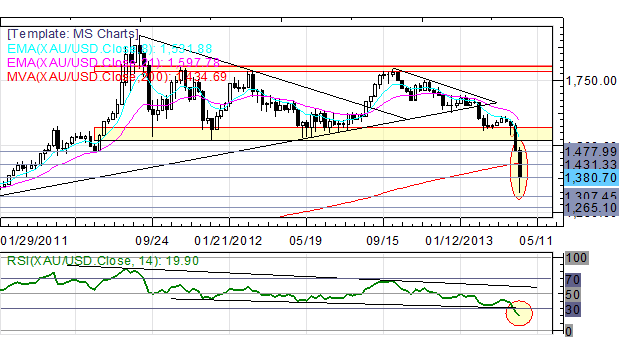