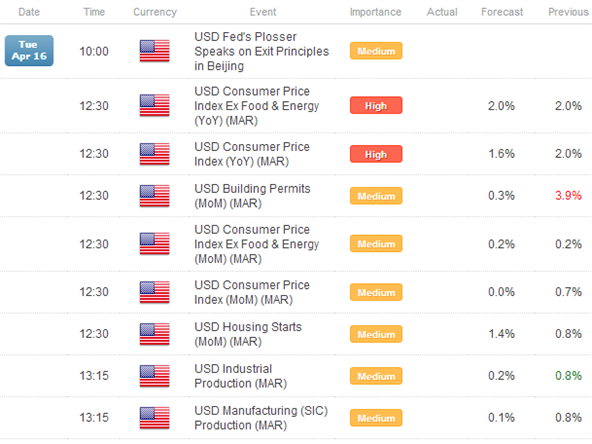 Aussie and Kiwi Rebound Alongside Gold; EUR/USD Above $1.3100

Risk appetite is on the mend on Tuesday, with the S&P 500 moving rebounding higher overnight in futures, following higher the commodity currencies and Gold (back near $1400.00/oz after hitting a multiyear low at $1325.00/oz) in what has proven to be an exciting session. Earlier this morning, shortly after the European open, the European currencies were at their daily lows, but despite a stream of weak data from both the Euro-zone (German ZEW Survey (MAR)) and the United Kingdom (Consumer Price Index (MAR)), the Euro and the Sterling are trading back above $1.3100 and $1.5300 against the US Dollar, respectively.

The rallies taking place in the Australian and New Zealand Dollar run counter to the developments that propelled their dramatic sell-off yesterday (which saw the AUDUSD fall from 1.0523 to as low as 1.0289, and the NZDUSD fall from 0.8581 to as low as 0.8377). Certainly, in light of the Reserve Bank of Australia’s April meeting Minutes released last night, the fundamental backdrop is once again becoming negative for at least the Australian Dollar. The RBA indicated that it could cut rates further, and that the Aussie “remained high,” pushing government debt higher (yields low) but the Aussie unchanged.

The Euro’s gains today are quizzical for many given the weak data out, but there was one item that crossed the ticker worth mentioning that could be pegged as the catalysts for the rally. First, the EU parliament voted in favor of implementing Basel III law, which would force banks to adopt higher tier 1 capital ratios (and thus bolster their balance sheets). If banks are stronger, sovereigns are less exposed to the crisis, and in time, the self-fulfilling feedback loops ends. This, I believe, was the end goal of Eurogroup President Jereon Dijsselbloem’s commentary regarding Cyprus several weeks back. 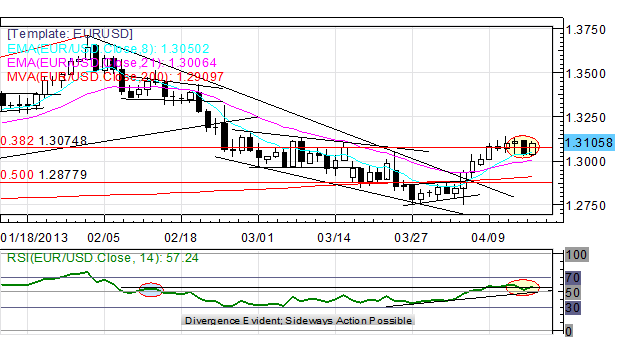 EURUSD: No change: “The pair has stalled at the 38.2% Fibonacci retracement from the Jul’12 low to the Feb’13 high at 1.3075, which presented a point of pause as expected, given that price has surged to its highest level in over a month. Last week we warned that technical divergence seen on the daily chart could lead to a pullback if not sideways price action, so I am near-term neutral with a tentative bias to buy a dip. Should the EURUSD regain traction, the 1.3245/3325 zone (80-pips) should be substantial resistance above, where prices consolidated above in late-December then failed to push through following the inconclusive Italian election results. Declines should be supported by the 8-EMA at 1.3050.” 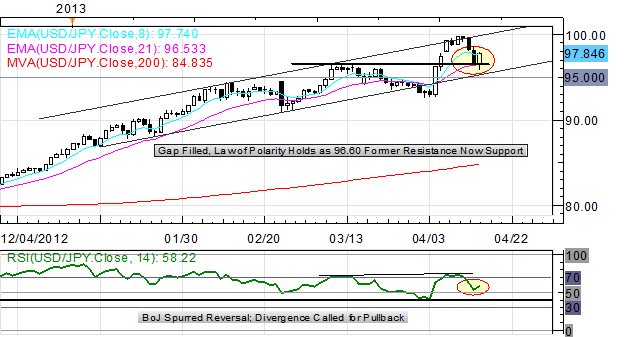 USDJPY: Yesterday I said: “After the USDJPY cleared the descending trendline off of the March 12 and March 20 highs, at 95.00/15, price sky rocketed right up to the topside rail at 99.30/55…While topside risks are still in play…price action or a move to fill the week’s opening gap are possible. Accordingly, dips into 97.50 and 96.60 are look to be bought on pullbacks.” An Evening Star candle cluster – a bearish reversal pattern – materialized on Friday, with further downside pressure today. Accordingly, I’m watching 96.60 as the ideal level to begin building longs again.” 96.60 has held, and price has rebounded back to 97.85. 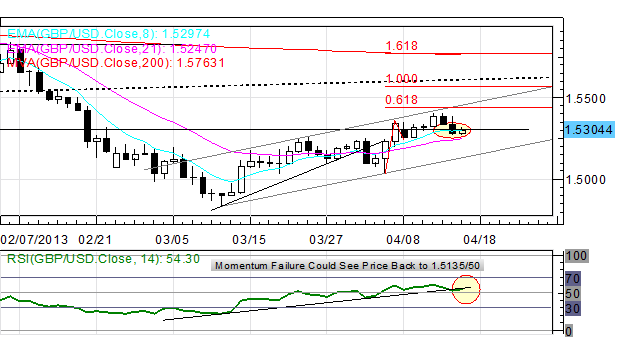 GBPUSD: Yesterday I said: “While the Bearish Rising Wedge move proved to be a fake out, an upward sloping channel has materialized off of the early-March lows. Recent price action from last Thursday suggests a pennant may have formed on the 1H and 4H time frames, with a test of 1.5440 due by Monday. I remain long-term bearish, but for now, I am neutral.” Price did not achieve 1.5440 yesterday and closed below 1.5320, making it likely that the ascending daily RSI trend dating back to the early-March low breaks, opening up the floor for a downside move towards 1.5245/50 and 1.5135/50. 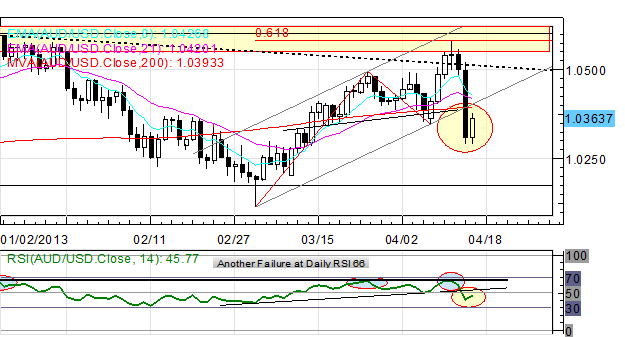 AUDUSD: On Monday I said that “Failure ultimately ensued thanks to the weak batch of Chinese data, and now the AUDUSD finds itself already back at support for the bullish structure that’s been developing since early-March. Channel support off of the March 4 and April 8 lows at 1.0390/400 is crucial, as another rejection at 66 in the daily RSI suggests that another period of weakness could be beginning.” 1.0390/400 cracked, and the uptrend in daily RSI broke as well, with the 8-/21-EMA structure compressing and close to flipping bearish. I’m neutral, but looking short now. 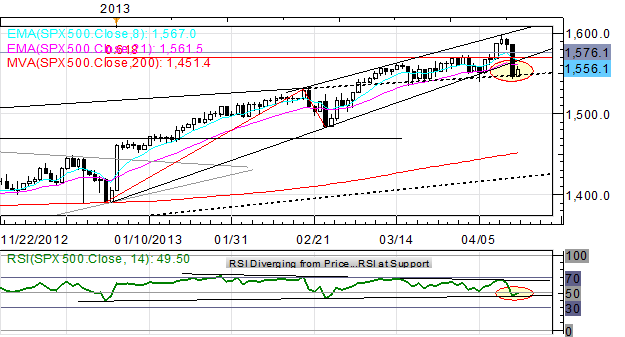 S&P 500: Is the top in? A dramatic sell-off yesterday dropped the S&P 500 below the crucial 1570/75 area, former swing highs as well as the ascending trendline support off of the late-December and late-February swings lows – coincidentally the pre-fiscal cliff deal low and the post-Italian election low. We’re in a bit of “no man’s land” here, with either a close back above 1570/75 necessary for a retest of the highs, or a close below 1530/35 to signal weakness towards and below 1500. 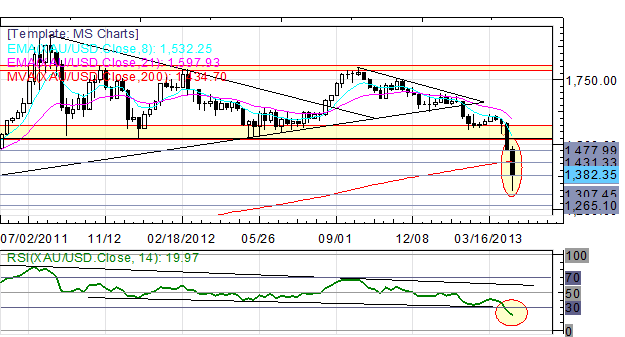