Last week’s major theme for this article was the intriguing discrepancies of Chinese data, in such that there was good reason to believe that something fishy was going on thanks to some confusing and misleading trade data. I went so far to say that “if Chinese data is trending positive now, there is little reason to be bearish on the Australian Dollar: the labor market has made positive strides the past several months.”

However, a weak Australian March labor market report and a very poor batch of Chinese 1Q’13 data has nullified the “stronger China, stronger Australian Dollar” thesis, and the rally that the dollar bloc in general has experienced over the past five to six weeks is now in question. A quick recap: Chinese 1Q’13 GDP grew by +1.6% q/q (versus +2.0% q/q expected) and by +7.7% y/y (versus +8.0% y/y expected); 1Q’13 Industrial Production grew by +8.9% y/y (versus +10.1% y/y expected); and March Retail Sales just reached consensus at +12.4% y/y. The Australian and New Zealand Dollars have been crushed today, both losing between -1.50% and -2.00% against the Japanese Yen.

It now seems that emerging Asia is in a bit of a growth rut, with two major misses in GDP readings the past week – outside of China, Singapore 1Q’13 GDP plunged by -1.4% q/q (versus +1.7% q/q expected). When I consider these data in context of the Chinese March New Yuan Loans data, which showed credit growth of over $1T, a necessary conclusion has to be drawn: Chinese policy officials are well-aware of the weak growth bout sweeping the continent, and in an effort to stoke growth, monetary policy has been loosened. The accelerating growth of the M2 money supply in March (+15.7% y/y versus +14.6% y/y expected) supports this idea. Accordingly, if credit growth continues, Chinese growth should rebound in 2Q’13. 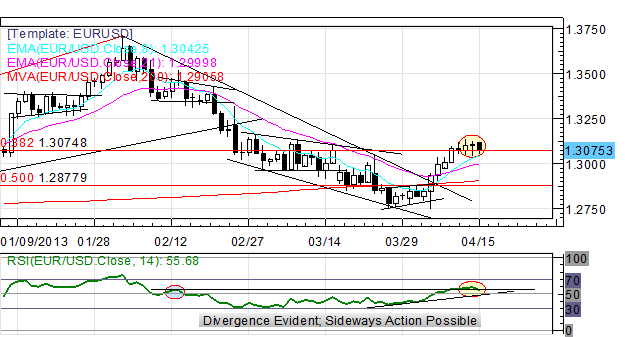 EURUSD: The pair has stalled at the 38.2% Fibonacci retracement from the Jul’12 low to the Feb’13 high at 1.3075, which presented a point of pause as expected, given that price has surged to its highest level in over a month. Last week we warned that technical divergence seen on the daily chart could lead to a pullback if not sideways price action, so I am near-term neutral with a tentative bias to buy a dip. Should the EURUSD regain traction, the 1.3245/3325 zone (80-pips) should be substantial resistance above, where prices consolidated above in late-December then failed to push through following the inconclusive Italian election results. Declines should be supported by the 8-EMA at 1.3040/45. 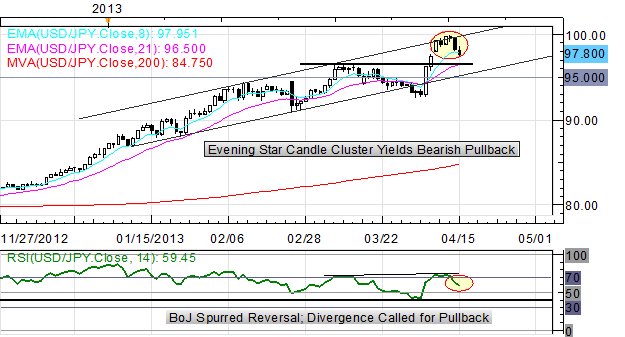 USDJPY: Last week I noted: “After the USDJPY cleared the descending trendline off of the March 12 and March 20 highs, at 95.00/15, price sky rocketed right up to the topside rail at 99.30/55…While topside risks are still in play…price action or a move to fill the week’s opening gap are possible. Accordingly, dips into 97.50 and 96.60 are look to be bought on pullbacks.” An Evening Star candle cluster – a bearish reversal pattern – materialized on Friday, with further downside pressure today. Accordingly, I’m watching 96.60 as the ideal level to begin building longs again. 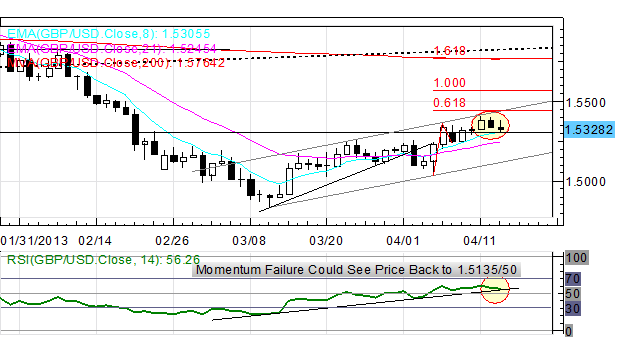 GBPUSD: Last week I said: “While the Bearish Rising Wedge move proved to be a fake out, an upward sloping channel has materialized off of the early-March lows. Recent price action from last Thursday suggests a pennant may have formed on the 1H and 4H time frames, with a test of 1.5440 due by Monday. I remain long-term bearish, but for now, I am neutral.” If price does not achieve 1.5440 today and closes below 1.5320, it is likely that the ascending daily RSI trend dating back to the early-March low breaks, opening up the floor for a downside move towards 1.5245/50 and 1.5135/50. 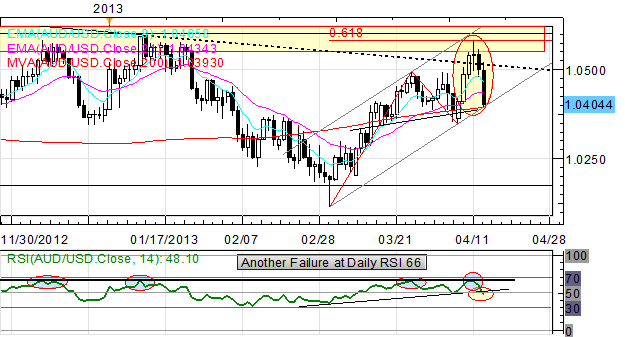 AUDUSD: Price advanced last week to test the topside limit of the 1.0575/635 zone, in which the descending trendline off of the July 2011 and January 2013 highs lays alongside several key Fibonacci extensions rooted in the rally from the March 4 low. Failure ultimately ensued thanks to the weak batch of Chinese data, and now the AUDUSD finds itself already back at support for the bullish structure that’s been developing since early-March. Channel support off of the March 4 and April 8 lows at 1.0390/400 is crucial, as another rejection at 66 in the daily RSI suggests that another period of weakness could be beginning. 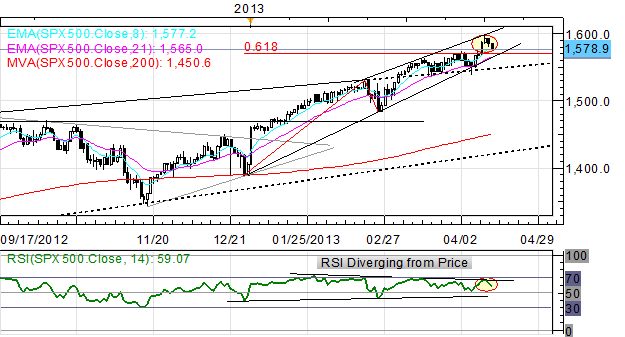 S&P 500: The past several weeks I’ve maintained: “This is not a ‘technically strong move. The float higher continues, towards the all-time high at 1576.1, but might be cut short in the 1565/75 zone, where two key Fibonacci extensions lay. Accordingly, the recent pushes up towards this all-time high have seen repeated denials, and conviction certainly appears to be waning.” This view was nullified yesterday upon the break of the 1576.1 level, with new all-time highs set just short of 1600. Overall, I remain very skeptical: between the weak March labor market report, the growing impact of the US budget sequestration on the real economy, and an increased number of Fed policymakers calling for an end to QE3 later in 2013. However, with respect to the technical structure, now that the 61.8% extension off of the late-December and late-February swings broken, the 100% extension comes in at 1625. 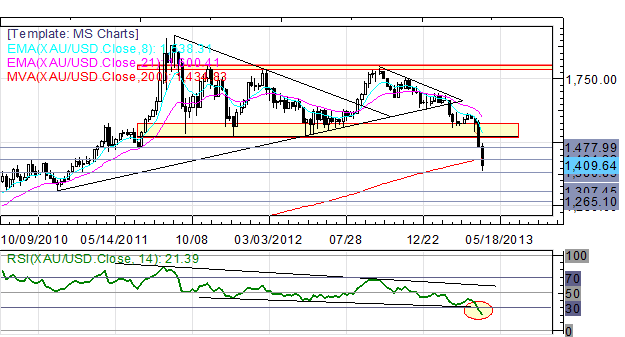 GOLD: The major support zone from the past 18-months from 1520 to 1575 gave way with fervor last week, as the combination of weak fundamentals (financial institutions scrambling for cash in Europe after Cyprus) and broken technicals produced the ideal selling climate. Precious metals in general have gotten hammered, and Gold has fallen back to the mid-March swing lows near 1380/85. A weekly close below 1430 this week leaves the possibility of a bigger dip towards 1305.