The commodity dollar bloc is outperforming for the second day in a row this week, as Chinese trade data from March showed a much greater than expected increase in exports, suggesting that the world’s second largest economy is seeing increased activity with its major regional trading partners like Australia and New Zealand. And while the rally seen by the commodity currencies, in this context, makes perfect sense, a breakdown of the actual trade figures raises more questions than it answers.

The Chinese Trade Balance for March came in at a -$880M deficit, well-below the $15.15B surplus forecasted, as Imports rose by +14.1% y/y versus +6.0% y/y expected, and Exports disappointed at +10.0% y/y versus +11.7% expected. Why? Exports fell to China’s major trading partners, including the Euro-zone and the United States, where the declines ranged from -7% y/y to -15% y/y. This is a clear signal that export-driven growth is unlikely to take hold in China this year, as slow recovery in the US and the worst recession in four years grips Europe.

But the data came across as very questionable, on the small peculiarity that exports to Hong Kong were up by +93.0% y/y in March. Like mainland China, Hong Kong exports a significant portion of its goods/services to Western developed nations; in context of the declining Chinese export figures to the Euro-zone and the United States, either Hong Kong had a truly historic month of consumption, or rather, the March Chinese trade figures are entirely distorted. 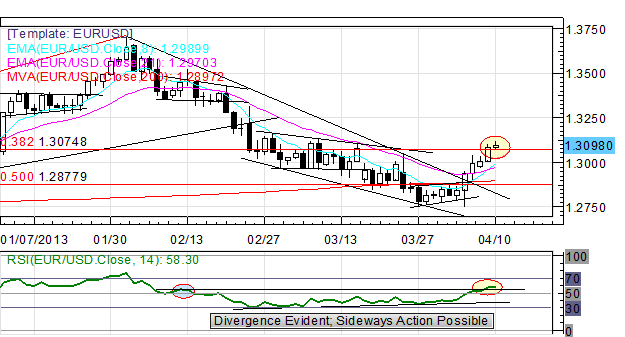 EURUSD: The Bullish Falling Wedge off of the February 1 and March 25 highs broke out positively last week, rooted in ECB President Draghi’s comments that there is “no plan B” for the Euro. Now, the EURUSD is retesting the 38.2% Fibonacci retracement from the Jul’12 low to the Feb’13 high at 1.3075, perhaps presenting a moment for the rally to breathe. Declines should be supported by 1.2950/60, the confluence of the 8-/21-EMAs (which are close to showing a bullish crossover). A close above said level today opens the door for a run towards 1.3160, the post-Italian election swing high. 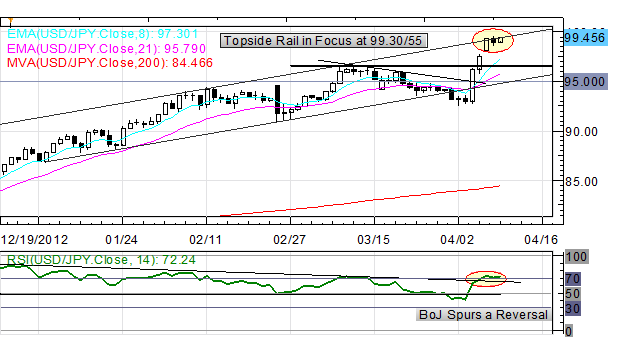 USDJPY: After the USDJPY cleared the descending trendline off of the March 12 and March 20 highs, at 95.00/15, price sky rocketed right up to the topside rail at 99.30/55. This is the same channel resistance that proved to be the top in mid-February and early-March. While topside risks are still in play, with the psychologically significant ¥100.00 figure eyed, sideways price action or a move to fill the week’s opening gap are possible. Accordingly, dips into 97.50 and 96.60 are look to be bought on pullbacks. 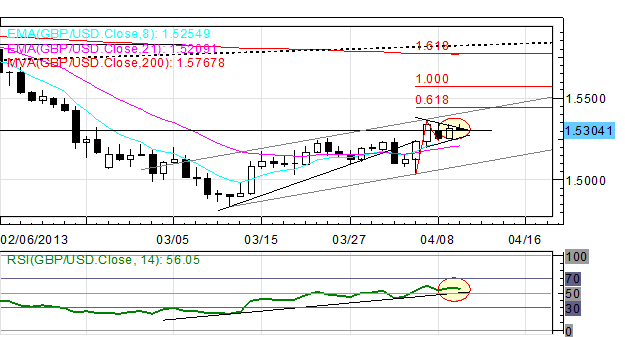 GBPUSD: Last week I said: “The failed run up to the 1.5285/375 region suggests that the rally in the GBPUSD seen the past few weeks may be nothing more than short covering and asset reallocation, rather than traders taking up new positions amid an improved interest rate outlook for the UK.” While the Bearish Rising Wedge move proved to be a fake out, an upward sloping channel has materialized off of the early-March lows. Recent price action from last Thursday suggests a pennant may have formed on the 1H and 4H time frames, with a test of 1.5440 due by Monday. I remain long-term bearish, but for now, I am neutral. 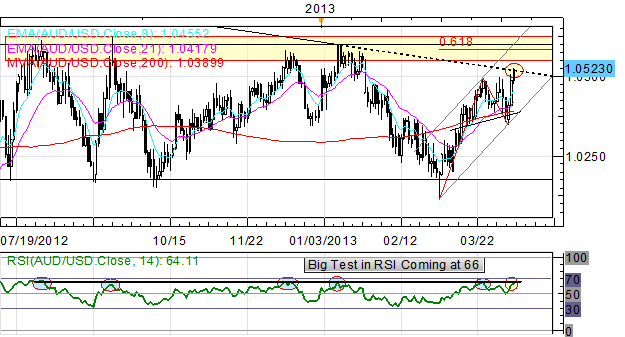 AUDUSD: After several failed tests of 1.0475/500, the AUDUSD has broken through today to test the topside limit of the 1.0475/535 zone, in which the descending trendline off of the July 2011 and January 2013 highs lays alongside several key Fibonacci extensions rooted in the rally from the March 4 low. With retail traders fading the AUDUSD’s advance, a break of this key region to the topside is probable, with a clean test of 1.0580/600 in sight. A weekly close above said level could open the door for a move towards 1.0850 in the 2Q’13. 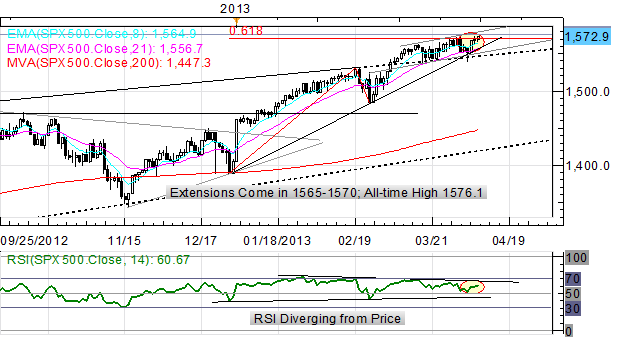 S&P 500: This is not a ‘technically strong move. The float higher continues, towards the all-time high at 1576.1, but might be cut short in the 1565/75 zone, where two key Fibonacci extensions lay. Accordingly, the recent pushes up towards this all-time high have seen repeated denials, and conviction certainly appears to be waning. Between the weak March labor market report, the growing impact of the US budget sequestration on the real economy, and an increased number of Fed policymakers calling for an end to QE3 later in 2013, I remain very skeptical. 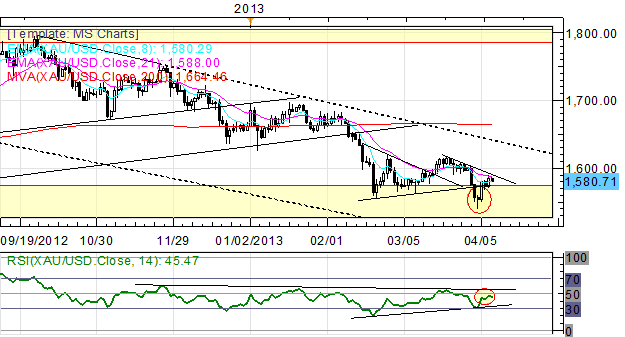