A growing divergence between the commodity currencies and the European currencies has formed the past several weeks, as near-crisis trading conditions have slowly receded: the tight ‘risk-on, risk-off’ atmosphere that saw the majors move in lockstep against the Japanese Yen and the US Dollar has given way to a new dynamic. Now, as has transpired overnight, the Australian, Canadian, and New Zealand Dollars are appreciating relatively to their weaker European counterparts, the British Pound, the Swiss Franc, and the Euro.

In the Asian trading session on Tuesday, the Reserve Bank of Australia kept its key rate on hold at 3.00% as expected, and amid renewed confidence that its easing of monetary policy during “late 2011 and 2012 is having an expansionary effect on the economy,” the Australian Dollar has surged back towards the $1.0500 level against the US Dollar. Similarly, on the back of a much stronger than expected commodity price gauge, the New Zealand Dollar is heading back towards its yearly highs. The Australian and New Zealand Dollars are the two top performers this year.

In Europe, the big news is that the Euro-zone Unemployment Rate ticked up to 12.0% in February (although the January figure was revised higher to 12.0% from 11.9%, technically making it two months at this horrid level), underscoring the likelihood that contraction gripped the region in the 1Q’13. The ECB is scheduled to meet on Thursday, where it is widely expected that they will keep their key interest rate on hold at 0.75%. I suspect that, despite the broken policy transmission mechanism (German and French companies/banks field substantially lower rates than their Italian and Spanish counterparts). As the economic divergence between the Euro-zone and the United States grows midyear, the ECB will be more open to a rate cut, just not now. 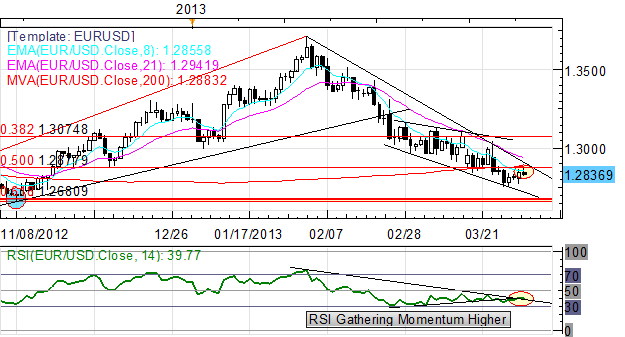 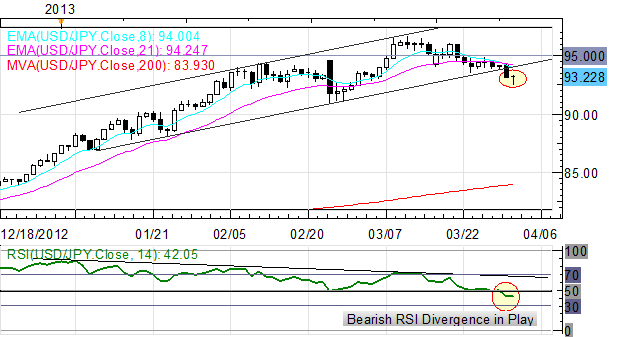 USDJPY: No change: “The USDJPY continues to consolidate near the lower rail of its ascending channel dating back to January, with the first test of 93.50 well-supported. Accordingly, with risk aversion afoot, the drive in the pair is likely lower given the compressing 2s10s Treasury spread. Nevertheless, BoJ policymakers are set to meet next week, in what should be the beginning of new, expansive monetary measures under the watchful eyes of Haruhiko Kuroda. A break below 93.50 could lead to a hasty sell-off towards 90.00/50.” 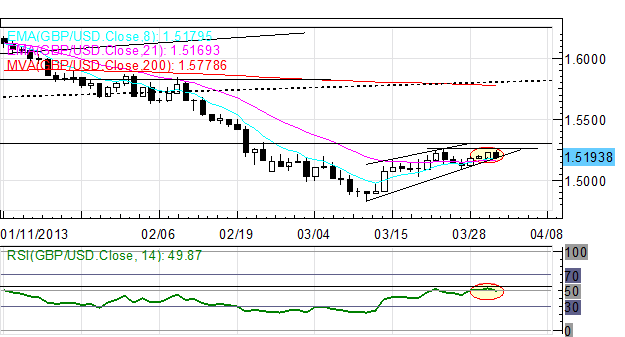 GBPUSD: No change: “The failed run up to the 1.5285/375 region suggests that the rally in the GBPUSD seen the past few weeks may be nothing more than short covering and asset reallocation, rather than traders taking up new positions amid an improved interest rate outlook for the UK. Price has fallen back below the 8- and 21-EMAs after a rejection at a critical RSI level of 55. A move below 1.5000 this week would necessarily bring into view the lows near 1.4800/30 going into April.” A potential Bearish Rising Wedge has developed (clearer on the 4H timeframe, which would suggest a retest of the lows near 1.4830. The pattern is valid so long as 1.5260/65 holds to the upside. 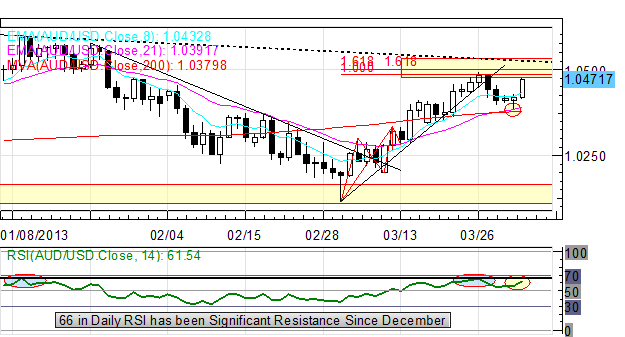 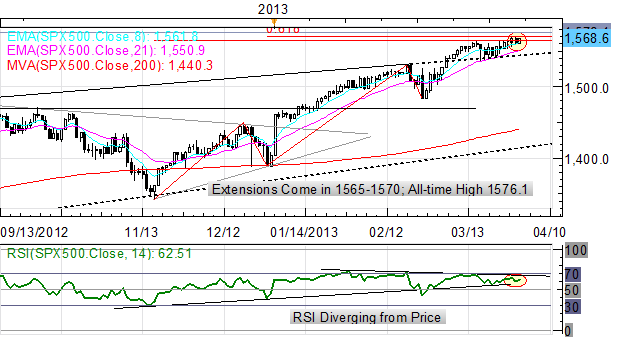 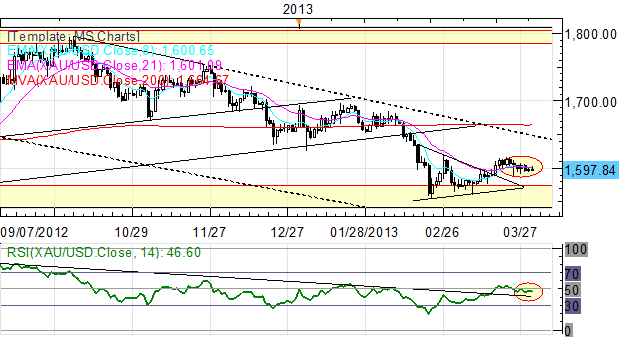