The wheels are falling off the ‘risk’ trade today, with the Japanese Yen and US Dollar emerging as the top two performers in what can be characterized as an ugly morning in Europe. European equity markets are falling across the board, led lower by the Italian MIB and the Spanish IBEX, as both countries’ peripheral bond yields have shot up to post-Cypriot bailout announcement highs.

A soft Italian bond auction is contributing to the droll performance by the Euro this morning, with Europe’s third largest economy seeing its 5-year bonds go for 3.65% today versus 3.59% on February 27; clearly, despite the European Central Bank’s safety net of the OMT, there are some concerns that are starting to mount. Accordingly, the EURUSD has traded to underneath $1.2800, its lowest exchange rate since November 21, setting up a test of key support in the first week of April (more in the technical outlook below).

The Euro’s tumble the past few days, despite the resolution to the Cypriot bailout, is all about some commentary from Eurogroup President Jeroen Dijsselbloem, who suggested that uninsured deposit holders join the queue of recapitalization options should a downtrodden bank need more funds. While this has obvious negative implications in the short-term, I suggest reading an opinion piece I wrote yesterday, which looks at the potential long game that Mr. Dijsselbloem might be playing. Other European currencies are getting slammed today as well, with contagion in full swing. Soft data out of the United Kingdom has the British Pound stumbling again. Similarly, the Bank of England announced that UK banks have a $38 billion shortfall, making the world’s oldest currency a less likely safe haven amid capital flight resulting from the Cyprus bailout. 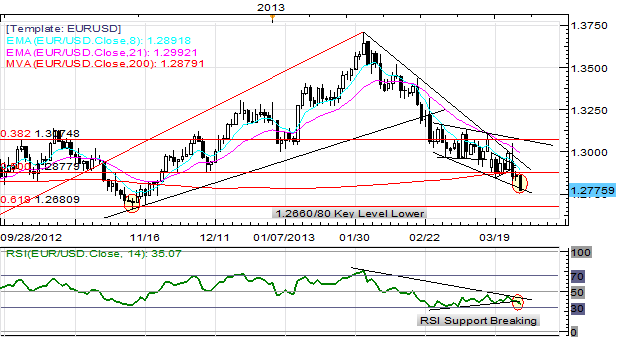 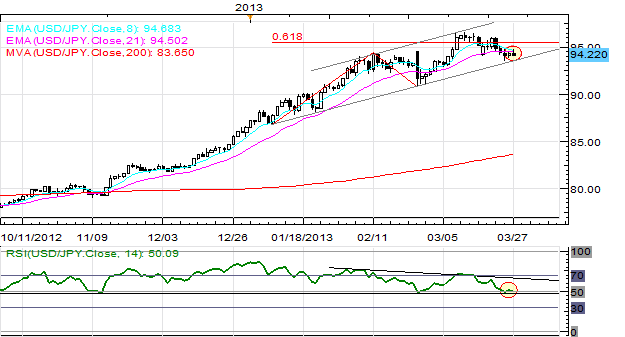 USDJPY: The USDJPY continues to consolidate near the lower rail of its ascending channel dating back to January, with the first test of 93.50 well-supported. Accordingly, with risk aversion afoot, the drive in the pair is likely lower given the compressing 2s10s Treasury spread. Nevertheless, BoJ policymakers are set to meet next week, in what should be the beginning of new, expansive monetary measures under the watchful eyes of Haruhiko Kuroda. A break below 93.50 could lead to a hasty sell-off towards 90.00/50. GBPUSD: The failed run up to the 1.5285/375 region suggests that the rally in the GBPUSD seen the past few weeks may be nothing more than short covering and asset reallocation, rather than traders taking up new positions amid an improved interest rate outlook for the UK. Price has fallen back below the 8- and 21-EMAs after a rejection at a critical RSI level of 55. A move below 1.5000 this week would necessarily bring into view the lows near 1.4800/30 going into April. 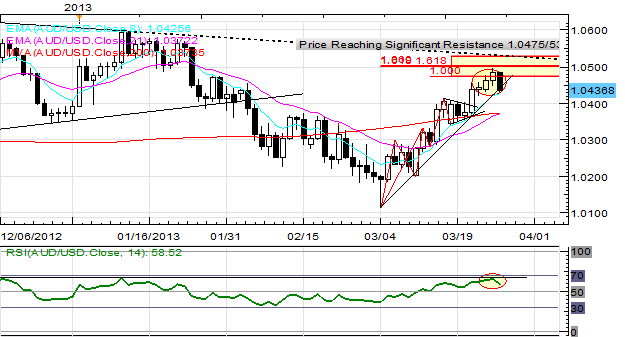 AUDUSD:The AUDUSD uptrend remains, but after rejection in the critical 1.0475/535 region, the uptrend is being tested at 1.0435. A daily close below 1.0435 brings into focus the Symmetrical Triangle breakout zone of 1.0370/95, also where the 21-EMA and 200-DMA sit. It is of note that daily RSI failed to move through 67 – a level that has capped the daily RSI on previous run ups towards 1.0600 in mid-December and mid-January. 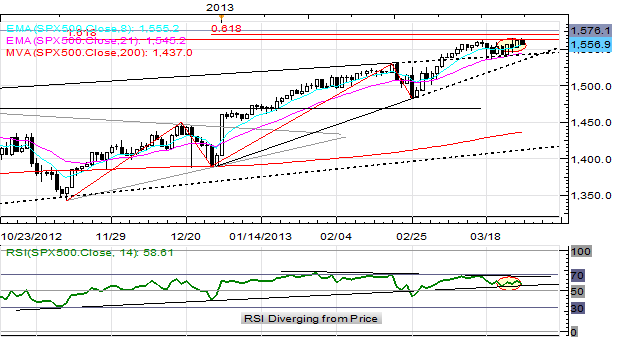 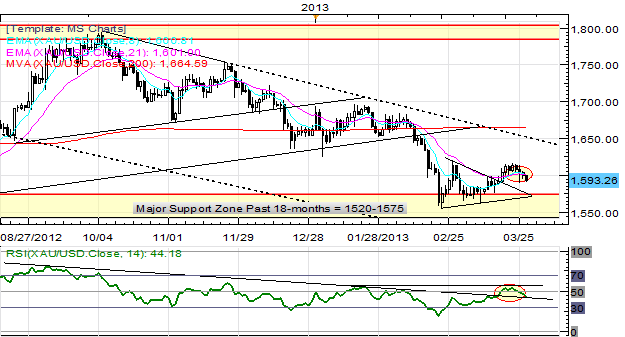