Euro Unimpressed with Cypriot Bailout - Cause for Concern

German Chancellor Angela Merkel described herself as “very happy” with the terms of the Cypriot bailout, and understandably so: the German electorate, ahead of the September election, will be pleased that Chancellor Merkel held firm despite blustering from Cyprus this week, with €10 billion being contributed from the core, and the rest coming from Cyprus herself. I am not as enthused.

While the finer points of the deal are still hazy, there are some dramatic details that now raise into question the proceedings of the future bailouts of Italy and Spain. There will be massive deposit levies on holdings at the two largest Cypriot banks, the Bank of Cyprus and Laiki Bank, with haircuts of 30-40% at minimum on deposits, while both junior and senior bondholders will have to take haircuts as well.

The decision to tax savers is important because of how the European sovereign debt crisis has flowed: each policy undertaken has set precedence for the next bailout; if Cypriot savers had to contribute to the bailout of its banks, then why wouldn’t the same measures be forced upon Italian and Spanish savers? The Troika will be forced to give the same terms at minimum in order to prevent alienating Cyprus – the Euro is about unity, anything short would paint Cyprus as a second-class citizen.

Concerns of a bank run are warranted in my opinion, and the spillover to sentiment in other European countries is inevitable. Take a look at Bankia today, one of the Spanish banks that was recapitalized last June: the stock fell by over -50% after news of the Cypriot bailout hit the wires! Investors in weak financial institutions in peripheral Euro-zone countries are on high alert – so should Euro traders. As we saw in June 2012, the bailout of Spain’s banks only produced three days of upside in the Euro – I would be shocked if serenity persisted past Wednesday. 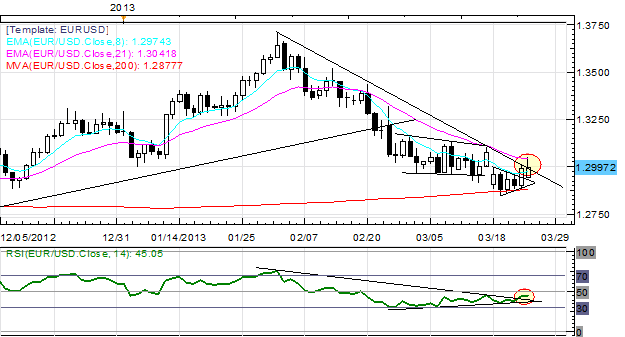 EURUSD: The headlines of Cyprus’ bailout pushed the EURUSD through the descending TL off of the February 1 and March 15 highs, at 1.2990/300, to its 21-EMA at 1.3042, before failure ensued today. As I do not find the bailout terms favorable to long-lasting Euro strength, the “top” after the bailout could now be in place. As long as price holds below 1.3085 this week – the trendline off of the highs from late-February/early-March – price action could be consolidating for another drive lower towards 1.2660. 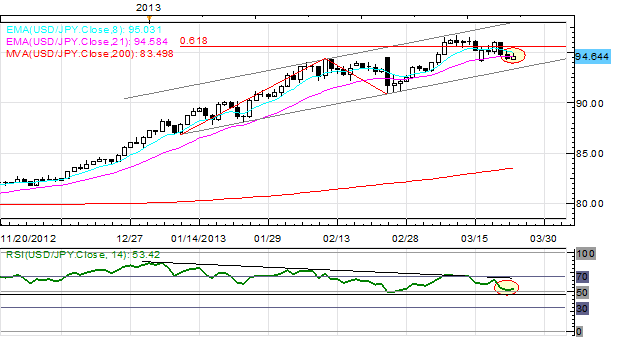 USDJPY: No change: “The USDJPY continues to range in an ascending channel, as it has been since the start of the year, with another test of the 21-EMA occurring today. However, with recent swing lows at 93.00 coinciding with the bottom rail of the ascending channel, a further drop – coinciding with a pullback in US equities or a rally in precious metals – looks to be bought, as the divergence between Fed and BoJ policies continues to grow. A weekly close above 96.00 eyes 97.00, 97.70, and 98.50/80 to the upside. Below 93.00, critical support doesn’t appear until 90.00/50.” 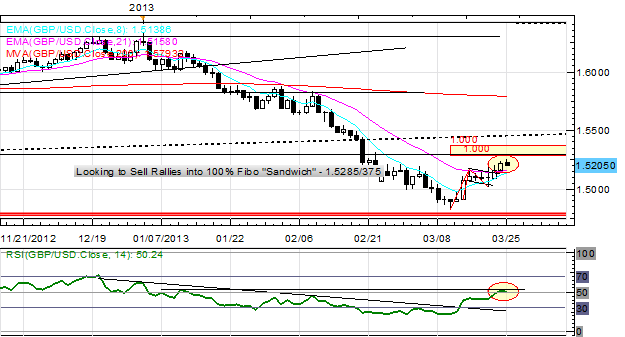 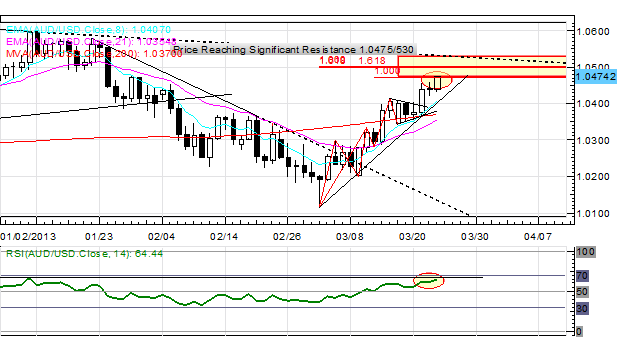 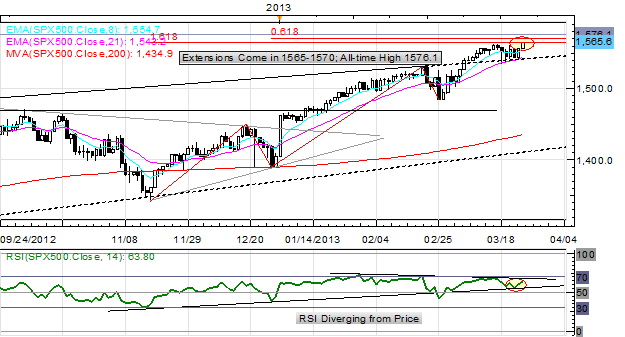 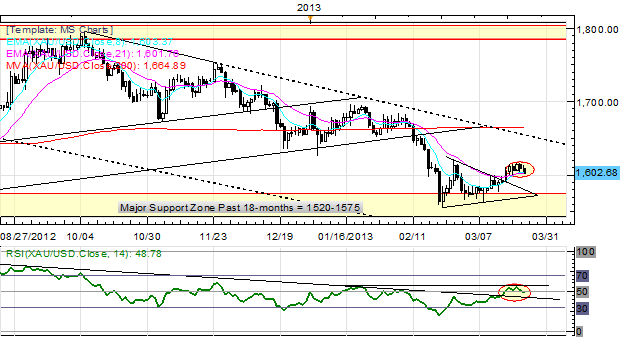