‘This is it’ – the proverbial moment when the fate of global sentiment for the coming weeks and months will be decided. Cypriot parliament members are reconvening today to legislate on new measures that would result in a deposit tax being levied against account holders with €100,000 or more saved up, now that the European Troika has rejected the Cypriot government’s ‘Plan B’ for a sovereign solidarity fund.

Tensions are running high. Within the last hour, a Cypriot government spokesperson said that the fate of the country’s inclusion in the Euro-zone would be decided over the course of the next few hours. Essentially, there are only two choices: accept the Troika’s demands for the deposit tax in order to unlock the necessary bailout funds required to keep the nation from defaulting; or leave the Euro-zone and face imminent default.

Without a deal on the table, and the window for negotiations over the weekend closing, the Cypriot economy could collapse next week now that the European Central Bank has pledged to turn off the liquidity spigot on Monday, ahead of when banks reopen on Tuesday. Reuters is reporting that Cypriot leaders are moving to implement capital controls ahead of the banks reopening on Tuesday, to prevent massive capital flight.

Amidst these harrowing developments, the Euro has consolidated across the board, in particular against the US Dollar (the EURJPY has been a bit more volatile, but remains well-contained). If the crisis is heating up as I suspect it is, part of the reason why the Euro might not be selling off so sharply – yet – is due to repatriation flows, or investors retrieving their Euros from abroad by selling the foreign currency and converting them back into Euros. We saw repatriation flows support the EURUSD rate in the 1Q’12.

There are no significant data releases or events on the economic docket on Friday, March 22.

EURUSD: Another Inside Day after yesterday’s Inside Day has a potential Bearish Symmetrical Triangle forming on the 4H/daily time frames, a notable continuation pattern that points to fresh yearly lows. However, key support remains at 1.2860/80, for the same three reasons: the 50.0% Fibonacci retracement on the July 24 low to the February 1 high; the 200-DMA; and the late-November and early-December swing lows. Accordingly, a resolution out of Cyprus is likely to drive a move in either direction; I remain open to both possibilities given heavy fundamental risk. Resistance is at 1.2955/60 (8-EMA) and 1.3040/50 (21-EMA). 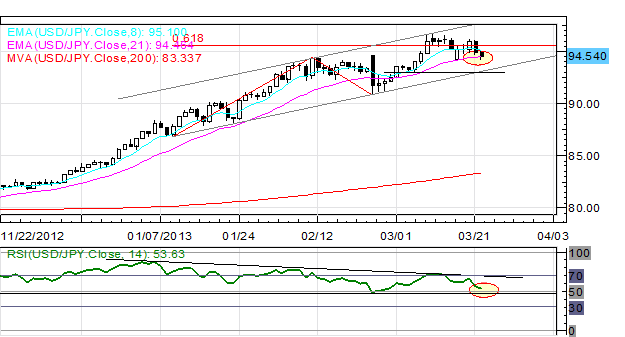 USDJPY: The USDJPY continues to range in an ascending channel, as it has been since the start of the year, with another test of the 21-EMA occurring today. However, with recent swing lows at 93.00 coinciding with the bottom rail of the ascending channel, a further drop – coinciding with a pullback in US equities or a rally in precious metals – looks to be bought, as the divergence between Fed and BoJ policies continues to grow. A weekly close above 96.00 eyes 97.00, 97.70, and 98.50/80 to the upside. Below 93.00, critical support doesn’t appear until 90.00/50. 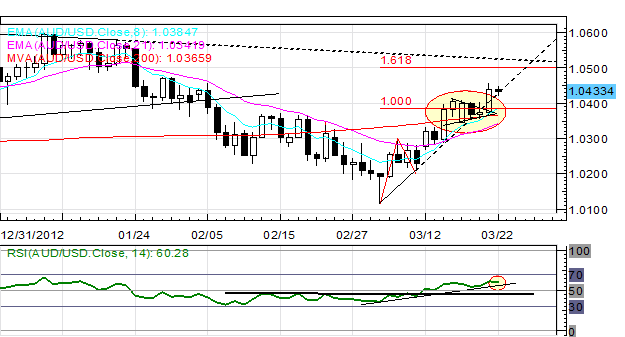 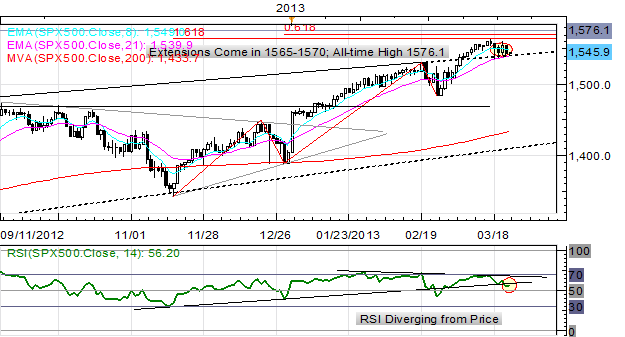 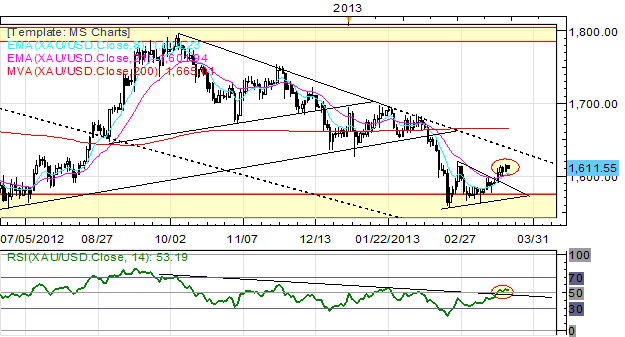