Majors Consolidate Around US Dollar as FOMC Awaits; Cyprus Simmers

The US Dollar has continued its mid-March swoon on the whole this week, despite continued constructive price action against the Euro. This is more or a less a function of how susceptible the Euro is to weakness right now, even for small reasons – Cyprus – which only represents 0.4% of overall Euro-zone GDP.

While I was out the past two days, I’ve had some time to digest the news of the Cypriot bailout, from the initial reports to musings after the failed parliamentary vote yesterday. The exact numbers of the bailout don’t concern me; rather, the potential precedence set by having depositors chip in for the bailout is what the issue is. If depositors in Italy or Spain (or any other Euro-zone country, for that matter) don’t believe that their funds are ‘safe’ should a bailout situation arise, there exists potential for massive capital flight, which we’ve already gotten a glimpse of in Cyprus the past few days.

The bottom line for Cyprus and the broader Euro-zone is that politicians continue to arrogantly and stubbornly implement fiscal policies based on political beliefs, rendering all outlets but for monetary policy available to provide any extra support. Accordingly, even if no doomsday scenario (like during September-October 2011; or May-July 2012) emerges from the Cypriot situation, the European Central Bank’s balance sheet could swell in order to constrain the financial aspects of the debt crisis.

A quick word on the Fed meeting today: expect a brighter outlook, but the fiscal drag is likely to temper any enthusiasm. Accordingly, the uptick in US data pales in comparison to what officials actually want – sustained labor market momentum without sacrificing price stability. Neither situation has emerged yet (Unemployment = 6.5% or CPI >2.5% y/y), so the $85B/month pace of QE3 is here to stay, for now. 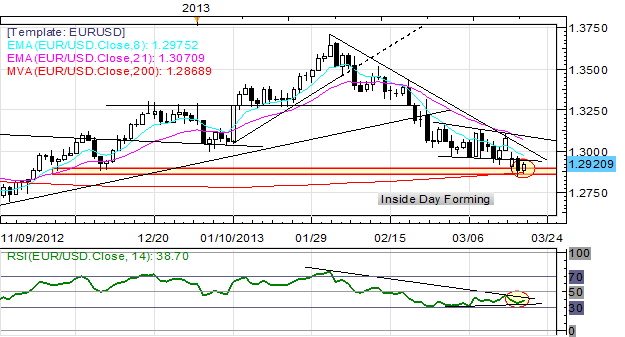 EURUSD: I was watching a potential Bullish Falling Wedge scenario last week, but carefully noted that “the breach of the yearly lows…following better than expected US data has increased the likelihood of further losses before a rebound.” The breach was the key for the move lower, with buyers giving a last-gasp effort before capitulating. Key support remains at 1.2860/80, for the same three reasons: the 50.0% Fibonacci retracement on the July 24 low to the February 1 high; the 200-DMA; and the late-November and early-December swing lows. Although there’s been a small bounce today, failure in this area could lead to a ‘waterfall’ sell-off towards 1.2660. Resistance is at 1.2975 (8-EMA) and 1.3070/75 (21-EMA). Support comes in at 1.2860/80 and 1.2660. 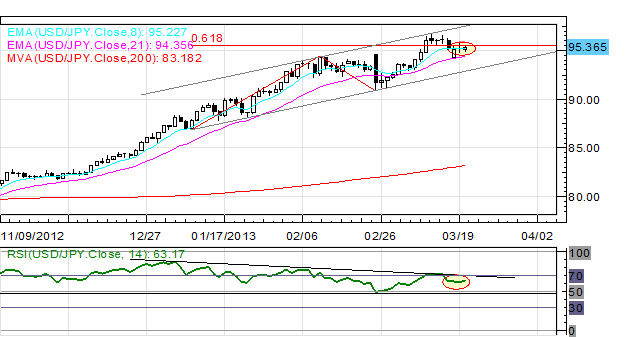 USDJPY: I maintain: “The USDJPY has set fresh highs for the year, as the RSI breakout on 2/28 was the cue for further strength. As US equity markets have hit fresh all-time nominal highs, the USDJPY finally confirmed, on the back of a widening 2s10s Treasury spread (exactly what I’ve been waiting for). Accordingly, the Bull Flag consolidation now points towards 97.70 as the next key area higher. Downside pressure has been prevalent again on Wednesday, though bulls continue to fight the downturn. Price has rebounded firmly above 96.00, and a test of the yearly high near 96.70 could be around the corner.” 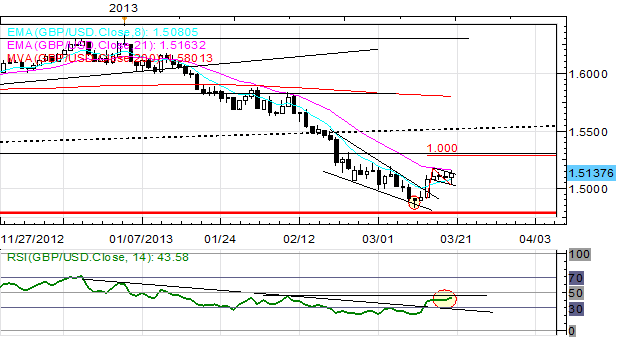 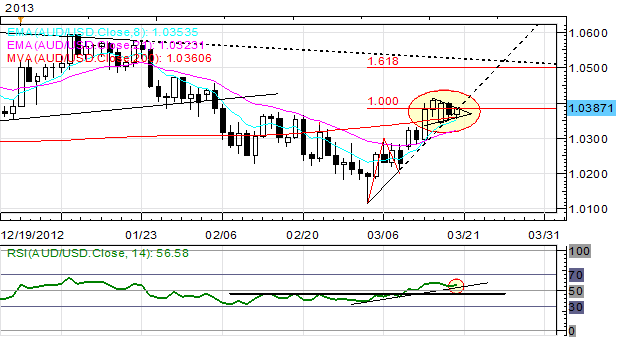 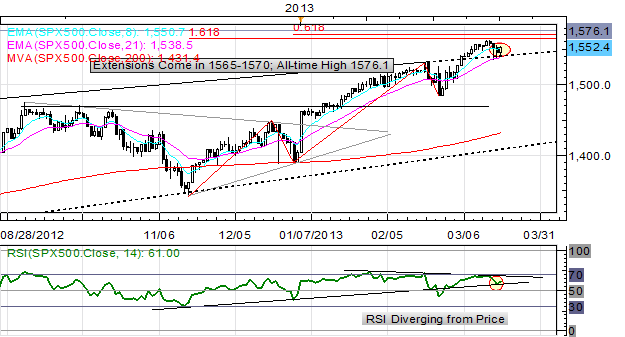 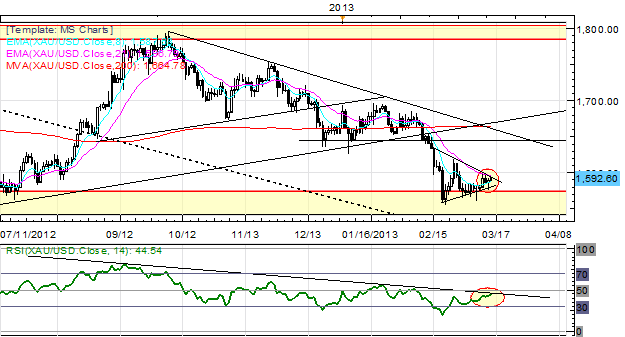