High beta currencies and risk-correlated assets are moving sideways into the US trading session, as the light economic docket in both Asia and Europe has produced the necessary calm for technical rebounds in the weaker FX majors this year, the British Pound and the Japanese Yen. Certainly, in neither of these currencies’ situations, has there been a material improvement in the rate conditions or economic data that would mark the potential for near-term (>1-week) bottoms.

While I still like both the British Pound and the Japanese Yen weaker throughout 2013, I recognize the significantly overstretched technical conditions to the downside in these currencies, so we thus must respect the potential for corrections. In GBPUSD, a run towards 1.5200 shouldn’t be ruled out, given the Bullish Falling Wedge on the 4H chart. In USDJPY, a dip towards 94.60/5.10 would be the initial opportunity to rebuy. The technicals, however, will be forced to cope with what could be a potentially bullish batch of data this morning for the US Dollar.

As I noted in this week’s Top 5 Key Events report, “The best monthly insight we have into consumption trends in the US might arguably be the Advance Retail Sales report. In February, consumption rebounded, with the strengthening US consumer powering through the payroll tax increase at the start of the year. According to a Bloomberg News survey, Advance Retail Sales increased by +0.5% m/m after a +0.1% m/m increase in January. If consumption continues to rebound, it means that consumers are looking past the government’s self-imposed austerity stumbling block, meaning the economy could be poised to strengthen through 2013.” On a print of +0.5% m/m or greater, I’ll be looking for US Dollar strength, especially against the British Pound, the Euro, and the Japanese Yen. 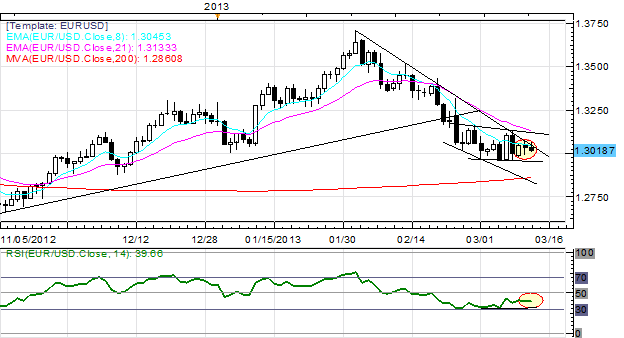 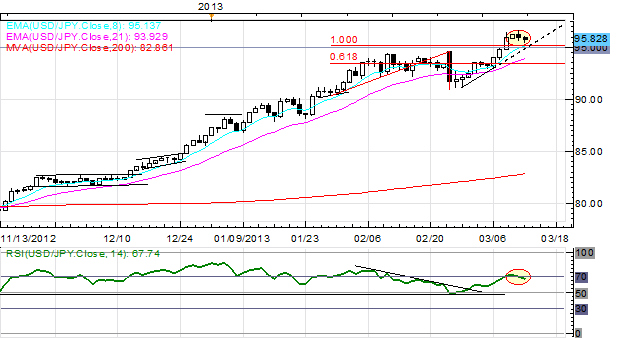 USDJPY: No change: “The USDJPY has set fresh highs for the year, as the RSI breakout on 2/28 was the cue for further strength. As US equity markets have hit fresh all-time nominal highs, the USDJPY finally confirmed, on the back of a widening 2s10s Treasury spread (exactly what I’ve been waiting for). Accordingly, the Bull Flag consolidation now points towards 97.70 as the next key area higher.” Downside pressure has been prevalent again on Wednesday, though bulls continue to fight the downturn and hold the pair just under 96.00. 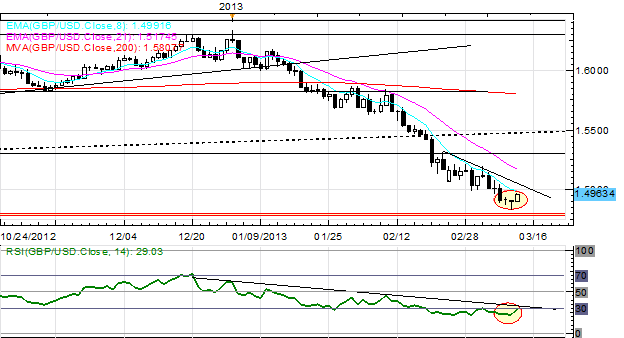 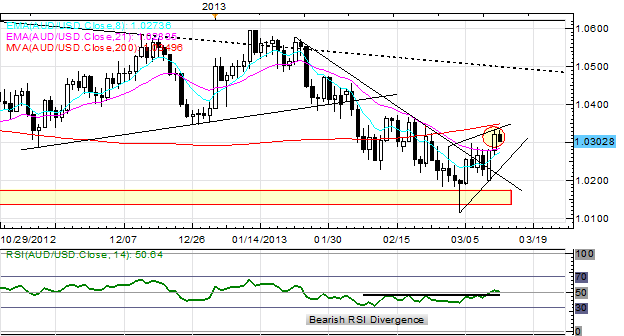 AUDUSD:Although the daily RSI broke above the key 47/50 area, bearish RSI divergence has emerged on a lack of follow through overnight. Still, with consolidation above the March low, the close above 1.0230/50 yesterday shifts near-term focus towards 1.0340/80. The daily RSI has confirmed the near-term move higher towards 1.0340/80; failure would put the lows back in focus. A break of 1.0340/80 points to 1.0460/80. An alternative bullish view of an Inverse Head & Shoulders may have formed on the 4H chart, adding further evidence for a run back towards the late-January swing highs. 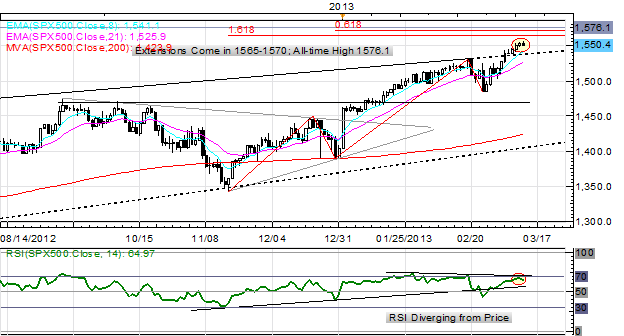 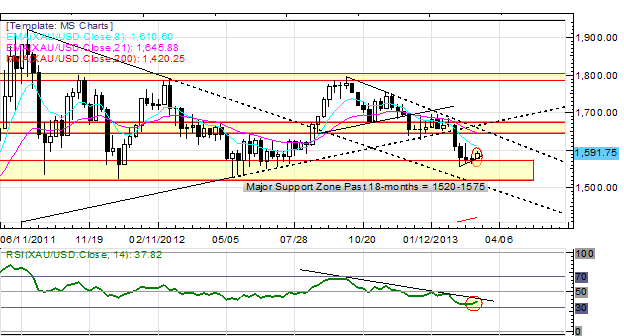