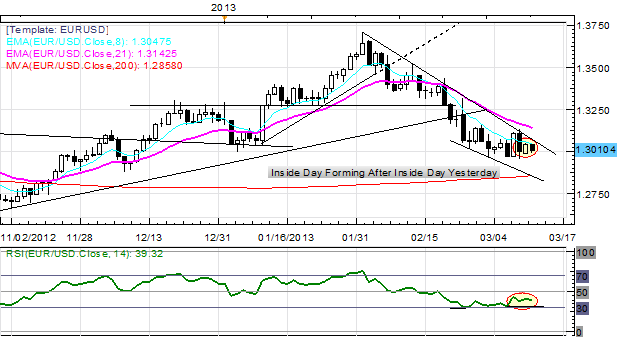 Early week jitters have returned among traders shorting the Japanese Yen, as it appears that Prime Minister Shinzo Abe’s nest of policymakers at the Bank of Japan might have one fewer dove. Opposition party DPJ will oppose the nomination of Kikuo Iwata for the deputy governorship, according to reports. Mr. Iwata is considered an arch-dove like incoming governor Haruhiko Kuroda, quoted as saying that he firmly believes in a massive balance sheet expansion encompassing purchases of government to fight inflation. Needless to say, Mr. Iwata’s stance entails a weaker Yen; thus, the news of him potentially not being as part of the BoJ’s new policy committee has provoked some short covering overnight.

In Europe, there are two main storylines today, one for the British Pound, and the other for the Euro. For the world’s oldest currency, focus is on the continuing deterioration of the economy, with both the Industrial Production (JAN) and Manufacturing Production (JAN) reports showing significantly steeper contractions than forecasted, as well as a markedly softer revision to prior figures. Between Bank of England policy firmly on hold right now – the key interest rate is tethered to 0.50%, and the Asset Purchase Target is stuck at £375B – and the Chancellor of the Exchequer continuing austerity, the UK economy is poised for further stagnation as recessionary growth conditions persist.

There are no significant events on the economic calendar for the US trading session on Monday.

EURUSD: No change: “Although the move higher was cued by the breakout in RSI a few days ago, the NFP print could derail the uptrend with ease…Certainly, this proved to be the case, with the reversal on Thursday completely reversed on Friday. I will continue to respect the downtrend off of the February 1 and February 13 highs, though remain open to a bullish outcome: a Falling Wedge (reversal pattern).” Resistance is at 1.3040/50 (8-EMA), 1.3080/100, and 1.3140/50 (21-EMA). Support comes in at 1.2950/70 and 1.2870/85. Note: an Inside Day is forming today after an Inside Day yesterday; clearly, indecision exists here. 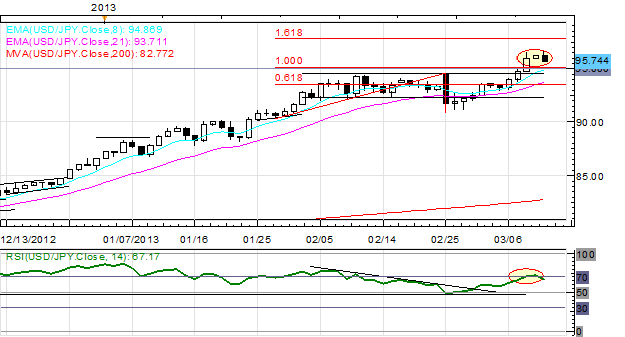 USDJPY: No change: “The USDJPY has set fresh highs for the year, as the RSI breakout on 2/28 was the cue for further strength. As US equity markets have hit fresh all-time nominal highs, the USDJPY finally confirmed, on the back of a widening 2s10s Treasury spread (exactly what I’ve been waiting for). Accordingly, the Bull Flag consolidation now points towards 97.70 as the next key area higher…Progress has been made towards this target, although with an Inside Day forming, it is possible we could see some consolidation/downside price action before the move higher.” Downside pressure has been prevalent on Tuesday, with a false move higher after yesterday’s Inside Day, and now a Bearish Piercing Candle may be forming. 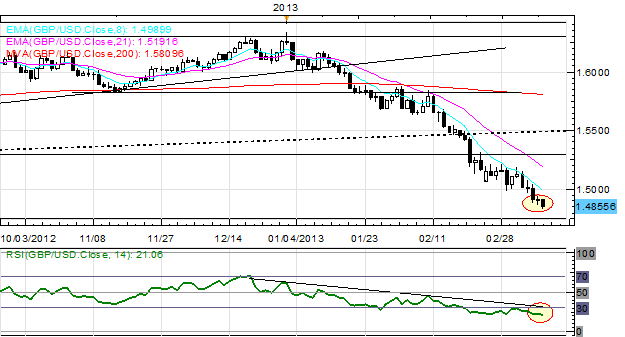 GBPUSD: No change: “With the ascending trendline off of the 2009 and 2010 lows breaking, as well as the 2010 to 2013 range bottom lows breaking near 1.5300, my bias is to sell rallies. Like the EURUSD, the GBPUSD is consolidating just near its 2013 lows, but has failed at its 8-EMA as it has for the past several weeks, suggesting that the next leg lower may be on the verge of occurring…Another failed run at the 8-EMA late last week has pushed the GBPUSD towards new yearly lows, with the first major support coming in at 1.4780/800 (March 2010 swing lows).” 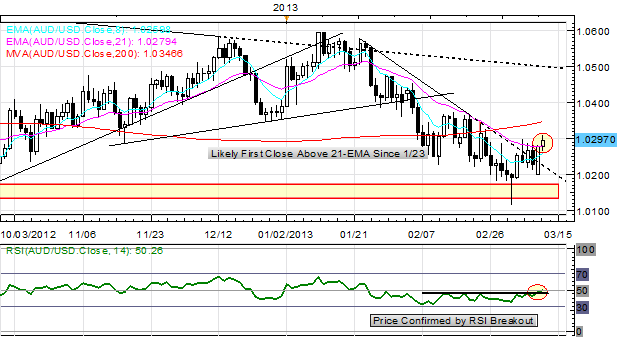 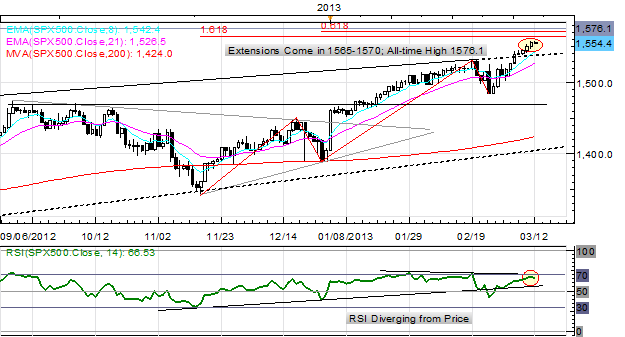 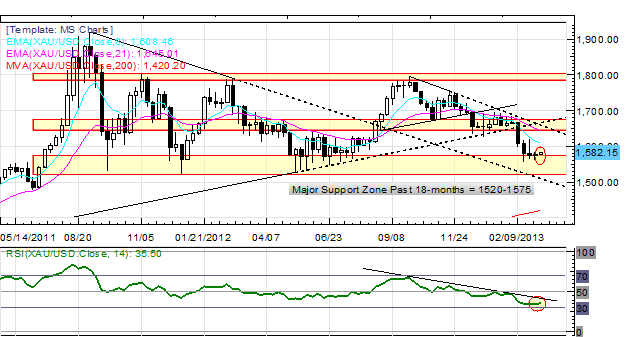