Calm Before the Storm: US Equities Hit New Highs Ahead of BoE, ECB, NFPs

US equity markets continue to march to the beat of their own drum, with the Dow Jones Industrial Average closing at an all-time high yesterday at 14253.77 (although the S&P 500 lags slightly, now -1.6% behind its all-time set at 1576.1). The derisive political situation in the United States hasn’t produced a pullback in risk appetite, despite the obvious consequences to the real economy as a result of dramatic spending cuts.

Perhaps there is a reason for this. On the surface, political tension is ominous; we’ve seen over the past several years what division in Europe and the United States can do to investors’ sense of security (see: August 2011; October 2011; May 2012; and December 2012). This time, however, political division in the United States might be forcing the Federal Reserve’s hand in keeping interest rates low as the economy struggles with balancing growth (a strengthening US consumer) and austerity (higher taxes and lower government spending). In a sense, then, the political gridlock embracing the world’s largest economy is a bullish catalyst, because it means the Fed will need to continue its expansive QE policies.

As noted yesterday, I am skeptical of the move by US equity markets to new highs for the sole reason that there hasn’t been an accompanying rise in volumes, which would suggest that these moves are ‘technically strong.’ The USDJPY may also be confirming this view: it has tracked the S&P 500, as well as the 2s10s Treasury spread very closely since mid-November. Despite the continued stream of dovish commentary out of the Bank of Japan, the USDJPY remains mostly range bound between 92.30 and 94.80; ideally, this pair would be moving to fresh yearly highs if risk appetite was truly prevalent. I’ll be watching this pair very closely over the coming days with the Bank of England and European Central Bank meetings, as well as the February Nonfarm Payrolls report, on tap. 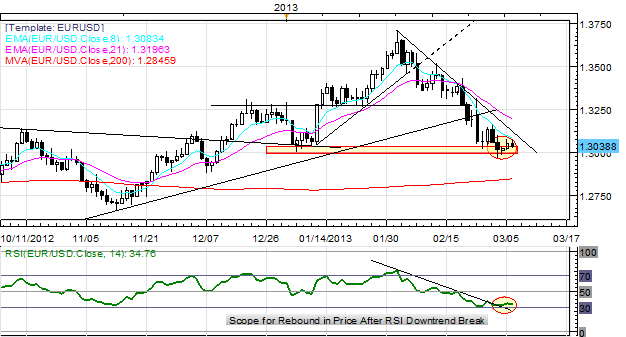 EURUSD: No change as the pair consolidates near its 2013 low ahead of the ECB Rate Decision on Thursday: “The pair has broken the major uptrend off the July and November lows, breaking at 1.3200/20 yesterday, leading to a cataclysmic sell-off into the January swing lows at 1.2995/3035. Although the EURUSD is near oversold conditions, we note that momentum amid political distress tends to supersede RSI. If 1.2995 breaks, a move into 1.2875 and 1.2660 shouldn’t be ruled out.” 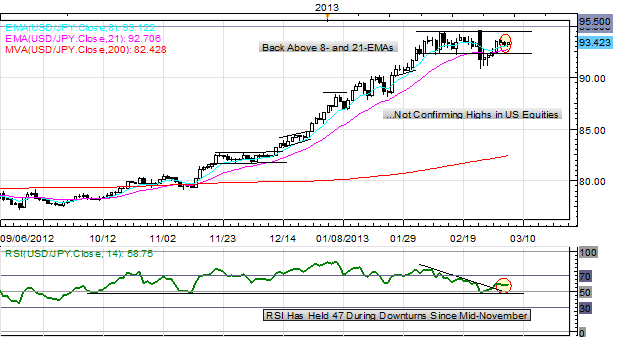 USDJPY: I’ve maintained: “The Bull Flag turned out to be a topping pattern, with the 92.30-94.80 range breaking to the downside. Now, with momentum heading lower, and significant event risk on tap, further selling into 90.00/20 would not be a surprise. Barring a collapse in Treasury yields (specifically, the 2s10s spread), the USDJPY remains a long-term buy.” Treasury yields have not collapsed; and US equity markets have moved towards all-time highs. The USDJPY has not confirmed this price action, however; and with the USDJPY above its 8- and 21-EMAs, I’m neutral for now. 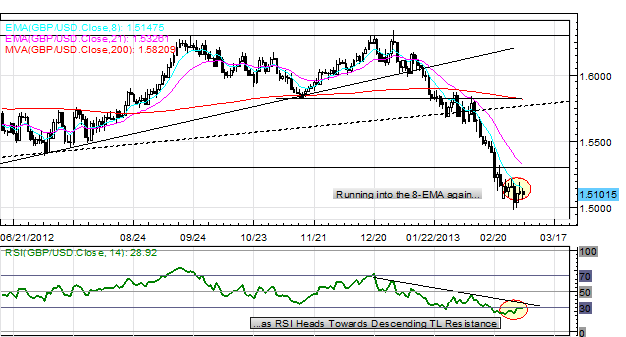 GBPUSD: I maintain: “Selling persists amid weak data, a dovish and divided Bank of England, and the United Kingdom losing its revered ‘Aaa’ rating...With the ascending trendline off of the 2009 and 2010 lows breaking, as well as the 2010 to 2013 range bottom lows breaking near 1.5300, my bias is to sell rallies.” Like the EURUSD, the GBPUSD is consolidating just near its 2013 lows, but has failed at its 8-EMA as it has for the past several weeks, suggesting that the next leg lower may be on the verge of occurring. 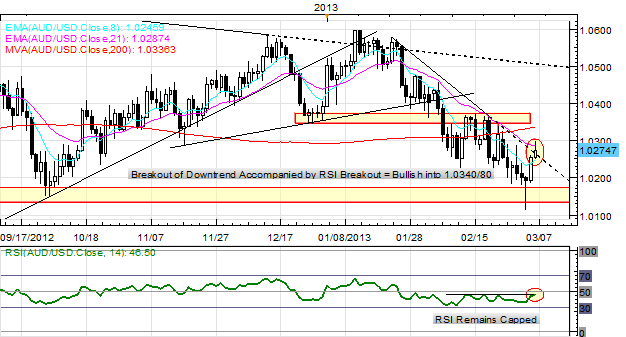 AUDUSD:The AUDUSD fell into the 1.0330/75 area on Monday, that I’ve been calling for several weeks, and now a bounce has a materialized back into the descending trendline off of the January 22 and February 20 highs, at 1.0250/70 today. However, the daily RSI remains capped below 50, as it has been during the duration of the downtrend. Now would be the time to look short again; however, a break of this RSI barrier, and a daily close above 1.0250/70 would negate the near-term bearish bias. The next level to look higher towards would be 1.0340/80 (mid-February swing highs); a continuation lower eyes a move towards 1.0090/1.0120, then 1.0000. 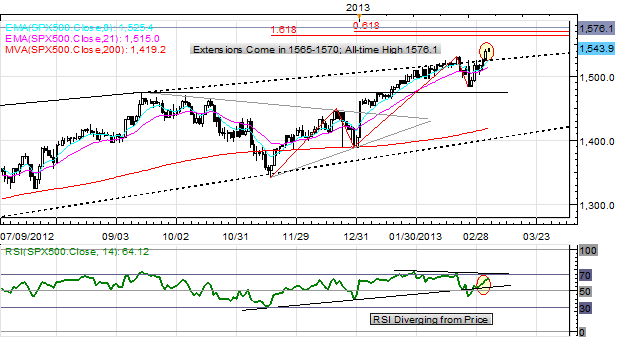 S&P 500: The near-term set back at 1530 took place for less than two weeks, but the break higher hasn’t been marked by high volume; no, it has been a volumeless rally, with the breakout occurring on volumes around 80% of the daily average in 2013. This is not a ‘technically strong move.’ The float higher could continue, towards the all-time high at 1576.1, but might be cut short in the 1565/70 zone, where two key Fibonacci extensions lay. I’m very skeptical up here – markets seem to be ignoring Italy and the derisive politics in the United States at the moment (this also happened in 2011 and 2012 at the beginning of those years). 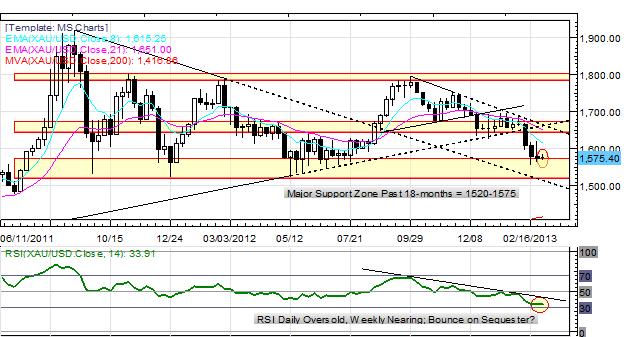