The S&P 500 is testing its highs of the year near 1530 despite the US budget sequestration that came into effect on Friday, although I can’t say I’m buying into the rally. As explained in the technical section of this article for the past several weeks, there is a very ominous Bearish Rising Wedge forming off of the 2009 lows, which has been characterized by falling volumes and diverging technical indicators (RSI, MACD, Slow Stochastics).

Although I was away from the markets yesterday, a quick glance at the stats on the S&P 500’s push towards the highs fits very neatly in this narrative: trading volumes were 25% lower than the 2013 daily average. A tenet of technical analysis is that a move by an asset (commodities, currencies, equities, etc) is considered to be ‘technically strong’ if there is strong volume supporting the move. Such has not been the case. Volume has been lacking behind the recent gains in equity markets in recent days, drawing into question the validity of such ‘bullish’ price action.

With my doubts about the rally against the US Dollar (and thus, by high beta currencies and riskier assets) growing, I turned to the Australian Dollar, who has seen a bit of strong movement the past two days, despite no material change in its medium- or long-term prospects. On the outside, China appears to be prepping the world for a slower economy, with a significant focus on the housing bubble, which looks like it could be bursting. The Reserve Bank of Australia, on the other hand, has kept its key rate on hold at 3.00%, but with the Credit Suisse Overnight Index Swaps showing only near a 20% chance of a 25-bps rate cut, no change was essentially priced in. Even as these rate cut expectations have dwindled, we’ve noted that the Australian Dollar has been weak – this foreshadows forthcoming weakness, in my opinion. 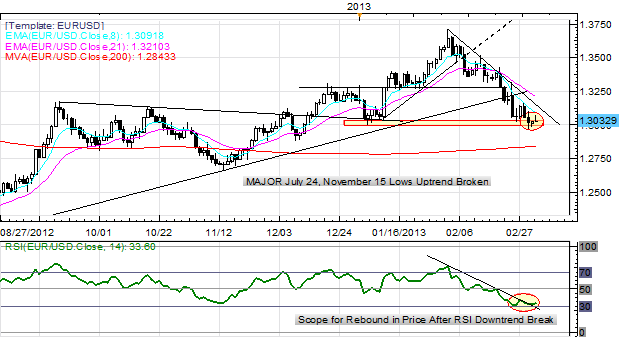 EURUSD: No change as the pair tests the 2013 lows: “The pair has broken the major uptrend off the July and November lows, breaking at 1.3200/20 yesterday, leading to a cataclysmic sell-off into the January swing lows at 1.2995/3035. Although the EURUSD is near oversold conditions, we note that momentum amid political distress tends to supersede RSI. If 1.2995 breaks, a move into 1.2875 and 1.2660 shouldn’t be ruled out.” 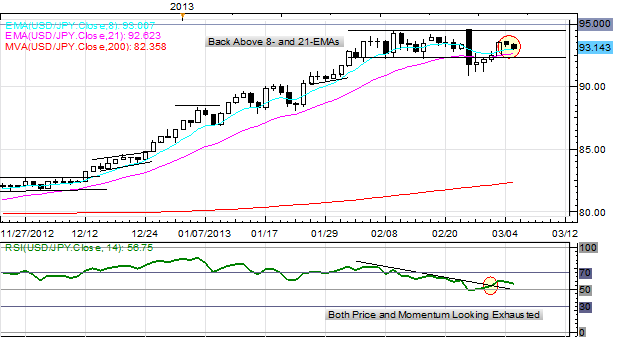 USDJPY: I’ve maintained: “The Bull Flag turned out to be a topping pattern, with the 92.30-94.80 range breaking to the downside. Now, with momentum heading lower, and significant event risk on tap, further selling into 90.00/20 would not be a surprise. Barring a collapse in Treasury yields (specifically, the 2s10s spread), the USDJPY remains a long-term buy.” Treasury yields have not collapsed despite the pullback in the S&P 500, and now the USDJPY has rallied above its 8- and 21-EMAs. I’m decisively neutral for now. 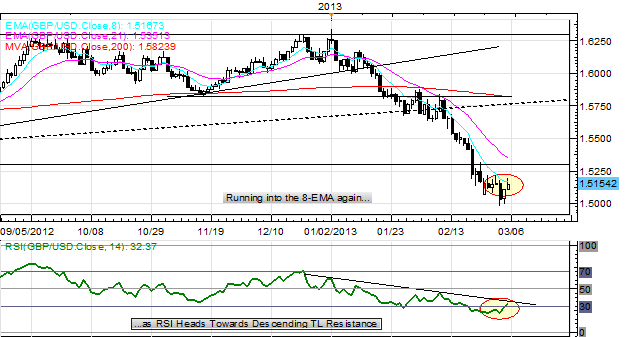 GBPUSD: I maintain: “Selling persists amid weak data, a dovish and divided Bank of England, and the United Kingdom losing its revered ‘Aaa’ rating. The opening gap this week was filled at 1.5160 after opening at 1.5072, suggesting that further downside may be in the cards. With uncertainty prevalent on the horizon – the US budget sequester coming on Friday – and the Federal Reserve tilting more hawkish, it’s possible to see a break below 1.5000 this week. With the ascending trendline off of the 2009 and 2010 lows breaking, as well as the 2010 to 2013 range bottom lows breaking near 1.5300, my bias is to sell rallies.” Fresh 2013 lows were hit today at 1.5025, at the time this report was written. Further downside is expected. 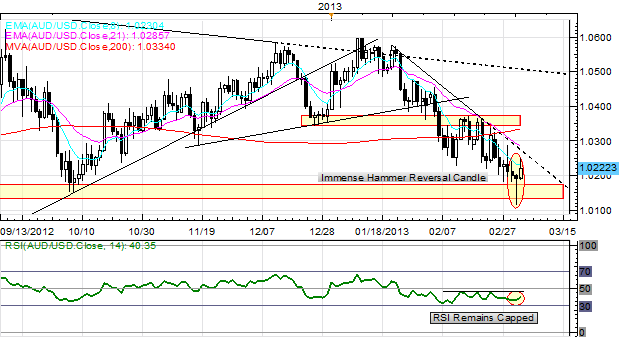 AUDUSD:No change: “The bounce from the 1.0265/90 area may have completed, with the rally halted at the 200-DMA at 1.0305/10. Although there was an overshoot into 1.0360, former support, failure has occurred, signaling further downside is possible…I’m still looking for a move into 1.0135/75…Selling has persisted as anticipated despite a two week respite; interaction in the 1.0135/75 zone is key for future action. I anticipate a violent break for a move below parity. Price has steadied just above this region, for now. Only a move back above 1.0345/75 negates the bearish bias.” 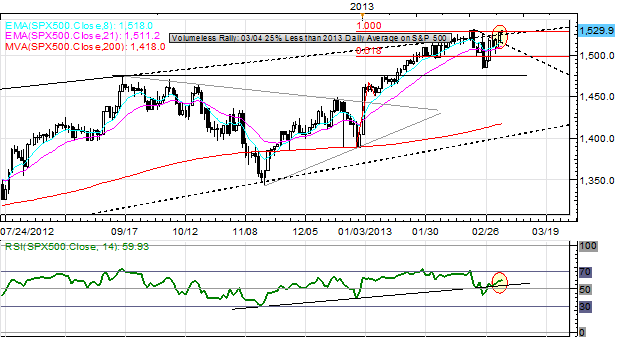 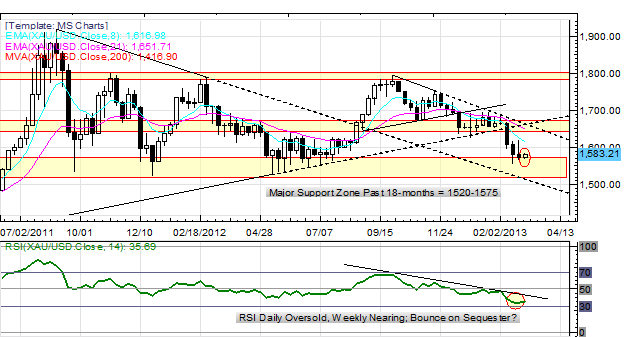