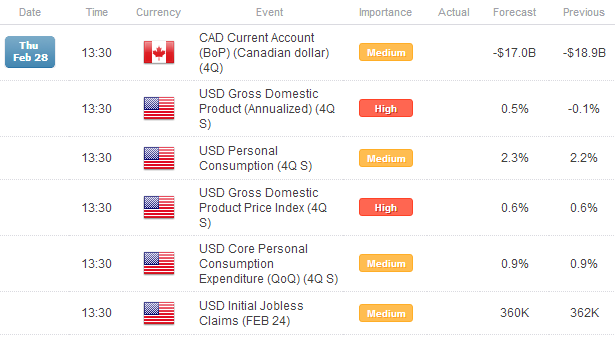 After yesterday’s well-attended Italian bond auction – the Italian treasury met its funding goals but had to pay approximately 50-bps higher on 10-year bonds – there’s been a continued rally by peripheral sovereign debt amid hopes for a national unity government in Italy. Because of the election results, no faction could garner majority support; instead, a coalition of the Centre-Left and Centre-Right parties led by P. Luigi Bersani and Silvio Berlusconi, respectively, could be “the only way possible,” as Italian Finance Undersecretary Gianfranco Polillo noted this morning.

But as discussed in this column yesterday, any possible government that might be formed at present time is more or less a ‘dead man walking.’ Nearly half of the votes cast in the election were for the anti-austerity candidates, Mr. Berlusconi and Beppe Grillo, of the Five Star Movement. Any such efforts to form a government that doesn’t adhere to said principles would likely be weak and collapse; on the other hand, if the new government respects the electorate, Germany and other core countries could turn away as Italy rejects reforms. Bottom line: there’s no favorable long-term outcome at present time in Italy; new elections are all but guaranteed.

We now must focus on what potential positives there might be to drive the Euro. True, the European Central Bank continues to rein in liquidity via its LTRO repayments, but general consensus is emerging that credit conditions are starting to get tight, which could precipitate a rate cut. But, the big driver could actually be the US budget sequester, set to hit tomorrow, March 1. If the Italian political situation is determined to be at an impasse, and Italian yields remain low, then focus turns to the dent the US economy is about to take. Price action in December was indicative of this; the Euro was a top performer while the US Dollar struggled. If Treasury yields compress, the US Dollar is likely to decline as well. 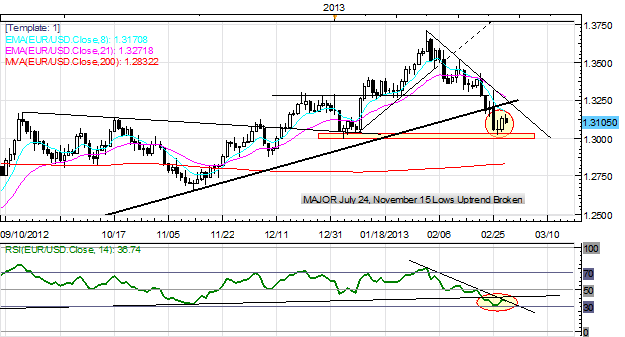 EURUSD: No change: “The pair has broken the major uptrend off the July and November lows, breaking at 1.3200/20 yesterday, leading to a cataclysmic sell-off into the January swing lows at 1.2995/3035. Although the EURUSD is near oversold conditions, we note that momentum amid political distress tends to supersede RSI. If 1.2995 breaks, a move into 1.2875 and 1.2660 shouldn’t be ruled out. “ 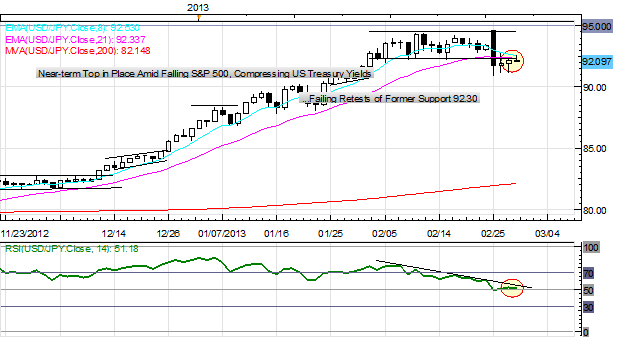 USDJPY: No change: “The Bull Flag turned out to be a topping pattern, with the 92.30-94.80 range breaking to the downside. Now, with momentum heading lower, and significant event risk on tap, further selling into 90.00/20 would not be a surprise. Barring a collapse in Treasury yields (specifically, the 2s10s spread), the USDJPY remains a long-term buy.” 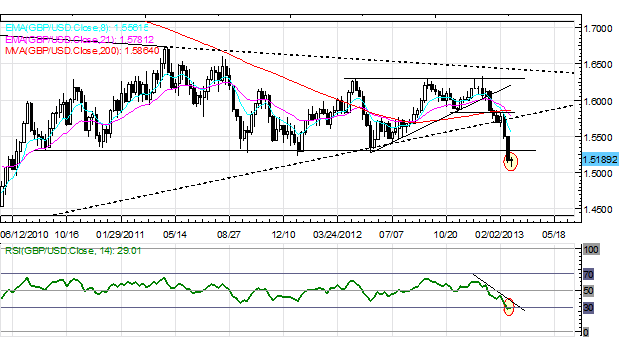 GBPUSD: No change: “Selling persists amid weak data, a dovish and divided Bank of England, and the United Kingdom losing its revered ‘Aaa’ rating. The opening gap this week was filled at 1.5160 after opening at 1.5072, suggesting that further downside may be in the cards. With uncertainty prevalent on the horizon – the US budget sequester coming on Friday – and the Federal Reserve tilting more hawkish, it’s possible to see a break below 1.5000 this week. With the ascending trendline off of the 2009 and 2010 lows breaking, as well as the 2010 to 2013 range bottom lows breaking near 1.5300, my bias is to sell rallies.” 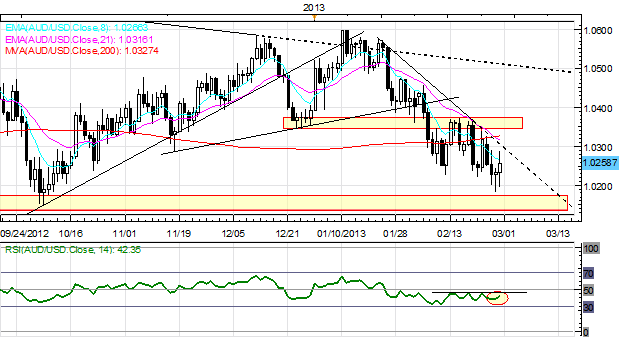 AUDUSD:No change: “The bounce from the 1.0265/90 area may have completed, with the rally halted at the 200-DMA at 1.0305/10. Although there was an overshoot into 1.0360, former support, failure has occurred, signaling further downside is possible…I’m still looking for a move into 1.0135/75.” Selling has persisted as anticipated despite a two week respite; interaction in the 1.0135/75 zone is key for future action. I anticipate a violent break for a move below parity. Price has steadied just above this region, for now. Only a move back above 1.0345/75 negates the bearish bias. 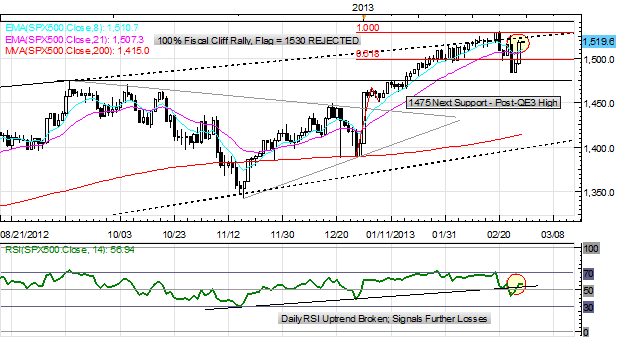 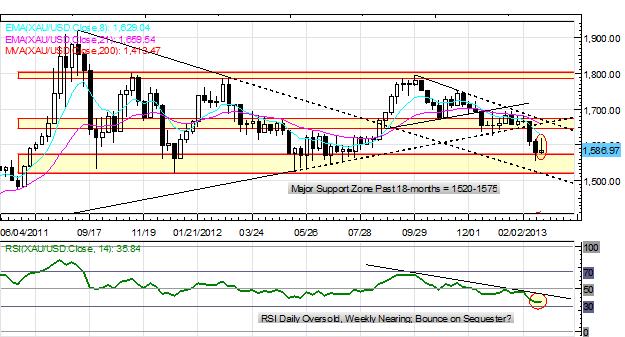