“Pessimo.” This is how one of my Italian colleagues described the election results yesterday – “very bad.” It seems that the majority of market participants would agree based on price action over the past 24 hours: the EURJPY plummeted over six (!) big figures; the S&P 500 fell approximately 30 points from high to low; and Italian bonds imploded.

But what’s “very bad” about the election results yesterday was not the fact that anti-austerity candidates moved up in the polls and received substantial support. The bad part of the Italian election results is that there is now a “hung parliament,” or divided government. The lower and upper houses of parliament share power; thus, when each branch breaks into different ideological directions, the country is essentially at an ungovernable impasse.

The reason why this is weighing on investor sentiment is now it means either: another caretaker government under Mario Monti, who has grown increasingly unpopular amid heightened austerity and record high unemployment; or new elections in a few months. Quite sincerely, the reaction thus far is very similar to what we saw last year in May, when the French and Greek elections ‘went the wrong way’ – political uncertainty creating an air of distrust in the markets. The only difference now is that the European Central Bank has its OMT safety net in place to catch plummeting Italian and Spanish bonds. Continued political uncertainty could force Italy into accepting the terms of the OMT, in order to calm investors. This may have limited downside in Euro-based pairs now; but don’t be surprised by further downside over the coming weeks. 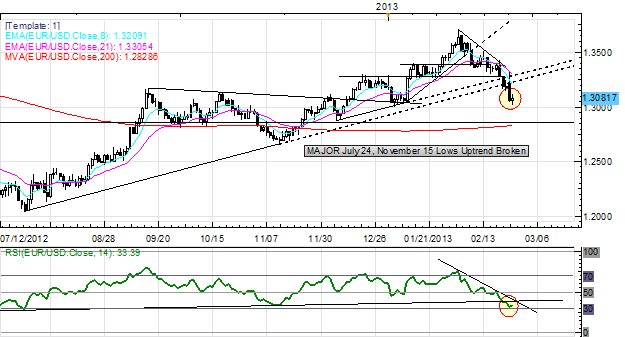 EURUSD: The pair has broken the major uptrend off the July and November lows, breaking at 1.3200/20 yesterday, leading to a cataclysmic sell-off into the January swing lows at 1.2995/3035. Although the EURUSD is near oversold conditions, we note that momentum amid political distress tends to supersede RSI. If 1.2995 breaks, a move into 1.2875 and 1.2660 shouldn’t be ruled out. 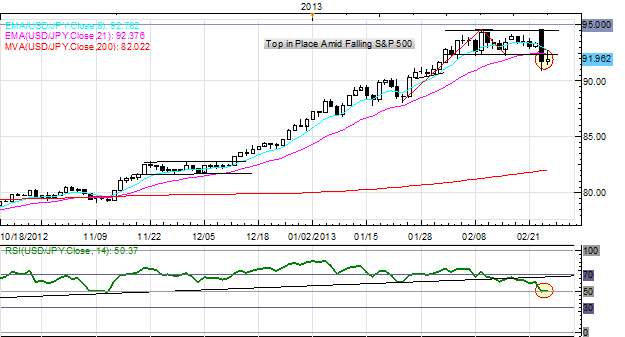 USDJPY: The Bull Flag turned out to be a topping pattern, with the 92.30-94.80 range breaking to the downside. Now, with momentum heading lower, and significant event risk on tap, further selling into 90.00/20 would not be a surprise. Barring a collapse in Treasury yields (specifically, the 2s10s spread), the USDJPY remains a long-term buy. 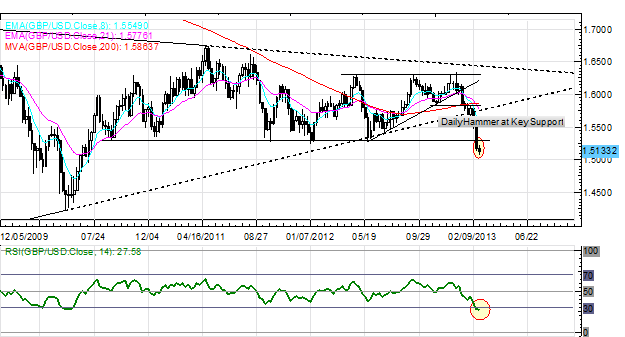 GBPUSD: Selling persists amid weak data, a dovish and divided Bank of England, and the United Kingdom losing its revered ‘Aaa’ rating. The opening gap this week was filled at 1.5160 after opening at 1.5072, suggesting that further downside may be in the cards. With uncertainty prevalent on the horizon – the US budget sequester coming on Friday – and the Federal Reserve tilting more hawkish, it’s possible to see a break below 1.5000 this week. With the ascending trendline off of the 2009 and 2010 lows breaking, as well as the 2010 to 2013 range bottom lows breaking near 1.5300, my bias is to sell rallies. 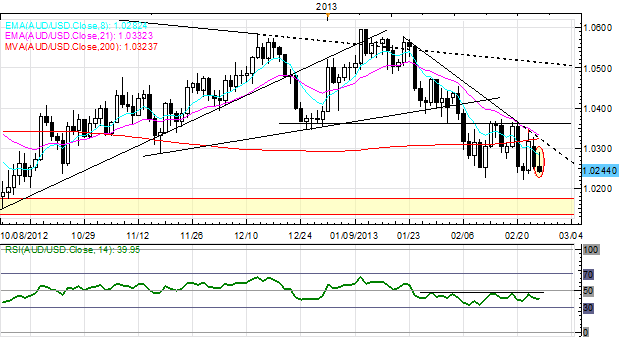 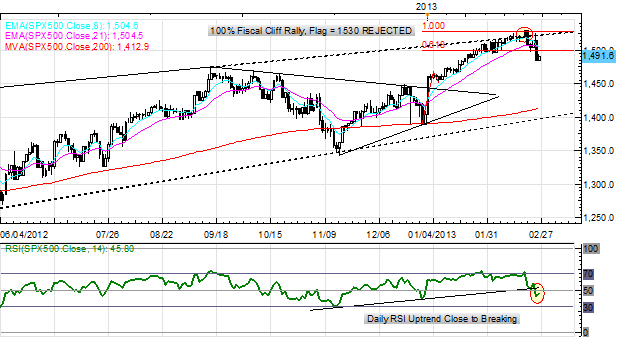 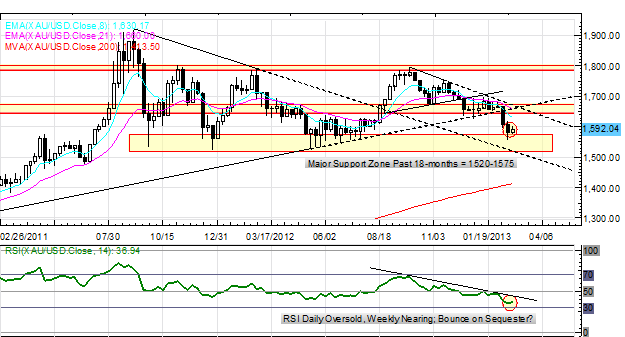