Mob mentality. It’s a psychological condition that arises when individuals or smaller groups of people are influenced by a larger group to behave in certain ways or follow certain trends; to act in unison. The typical scene is a riot; an angry protest breaks out into violence and everyone fights, regardless if they have a reason to pick up arms. Why bring this up? The smaller, less significant (on a global scale) central banks are starting to exhibit these very characteristics.

So who is the smaller group in this example? The Bank of Canada, the Bank of England, the Reserve Bank of Australia, and the Reserve Bank of New Zealand. In 2011, these currencies were quite strong relative to their peers; the commodity currency complex has been resilient since 2009, as investors chased relatively higher yield in a ZIRP environment. But the tables are starting to turn; after fighting the larger group’s trend of massive monetary supply expansion over the past four years, mob mentality is starting to set in.

The British Pound and the New Zealand Dollar are the latest victims of this psychological phenomenon. Both currencies had their central banks talking down their values in the Asian and European sessions: RBNZ Governor Graeme Wheeler said that “when the New Zealand Dollar is coming under upward pressure, we want investors to know that the Kiwi is not a one way bet”; the BoE February meeting Minutes showed that policymakers’ collective stance is becoming more open to additional easing, as the central bank overlooks inflation to help stimulate the economy – exporters are benefiting from the weak Sterling, as the BoE Minutes displayed.

Why do these type of comments matter? Central banks are beginning to shift away from domestic issues to focus on exogenous ones – the exchange rate of their currency – as a way to operate monetary policy. The BoE and the RBNZ may be smaller fish – but they too are starting to fire shots in the ‘currency war.’ 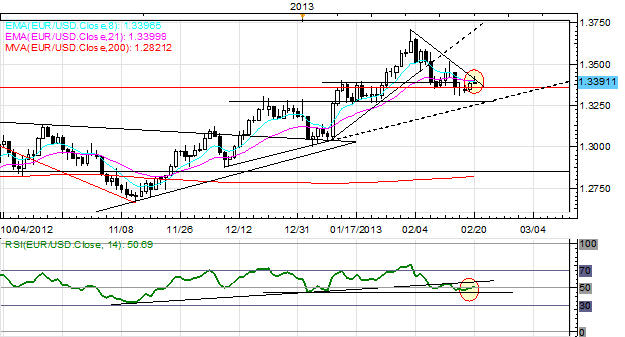 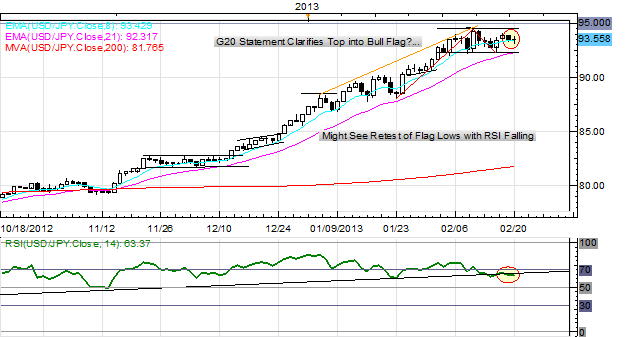 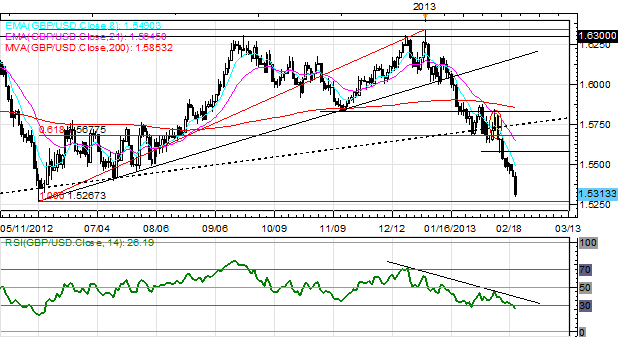 GBPUSD: Selling persists on further bad data from the UK and dovish commentary from the BoE, setting up for a test of the significant June 1 low at 1.5265/70. With technical conditions extremely oversold on shorter-term timeframes (1H and 4H) and longer-term views moving to extremes as well, a rebound at such a significant level wouldn’t be surprising. Support comes in there and 1.5000. Resistance is 1.5425/50, 1.5560/80, and 1.5660/80. 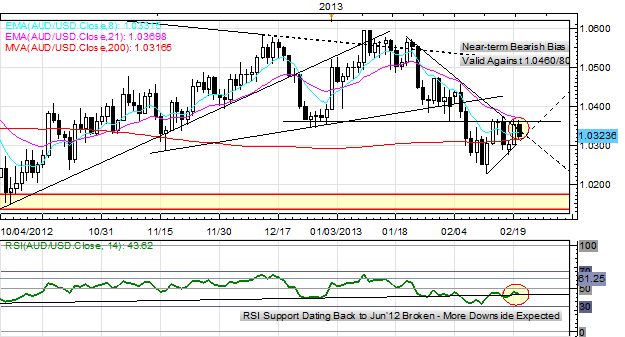 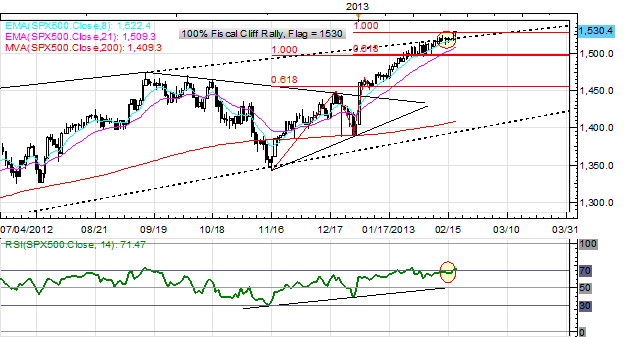 S&P 500: A week ago I said: “as indicated on the charts the past weeks, noting “nearing the top 1505/1512” – the top was 1504.6. If this breaks, 1520 is in sight.” Indeed, the irrational exuberance has continued, bringing topline Bearish Rising Wedge resistance in focus at 1520; the December 2007 highs of 1520/24 could be reached on an overshoot. The 100% Fibonacci extension on the fiscal cliff rally and flag comes in at 1530. Bottom line: I’m expecting a significant setback (-10%) in the S&P 500 unless volumes accelerate rapidly, given the disconnect from reality. 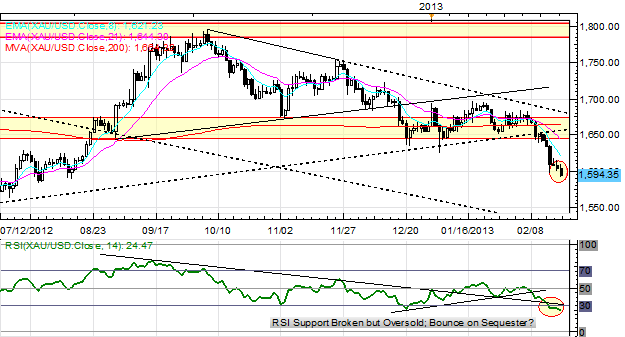