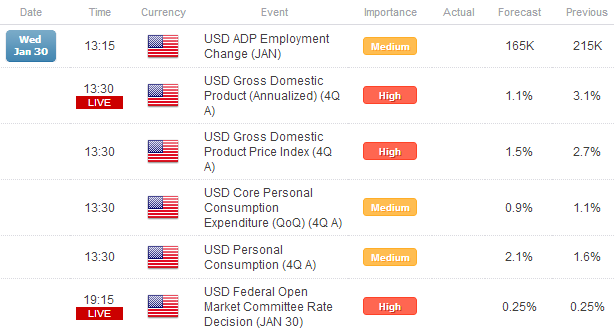 Forex: Like Clockwork, Yen Breaks Down - EUR/JPY Closing in on ¥124

The middle of the week has arrived, which means it’s time for more Japanese Yen weakness. It’s been observed that the past several weeks have produced a clear pattern for how the Yen behaves, marked by substantial weakness headed on Wednesday and/or Thursday, after slight strength on Monday and Tuesday. On the flipside of this equation, the Euro has been an absolute monster, racking up over +100-pips overnight on little more than continued rotation out of a currency hampered by a central bank expanding its balance sheet (the Yen and the Bank of Japan) into a currency aided by a central bank signaling tightening via balance sheet shrinkage (the Euro and the European Central Bank).

In fact, as the BoJ has raised its yearly inflation target to +2% and signaled that it would monetize ¥13T/month (roughly $140-145B/month) starting in 2014, the ECB has moved in quite the opposite direction this year: since the end of December, the ECB’s balance sheet has shrunk by €89.417B, per the most recent data available on January 25 (this will be even lower at the next update on Friday in light of the LTRO repayments). The EURJPY is closing in on ¥124.00 as a result, its highest level since May 4, 2010.

With credit conditions and foreign exchange rates rapidly shifting, concerns are growing that liquidity could become a problem once more in the Euro-zone, and that economic growth could be hampered by the stronger Euro (as a result of lower competitiveness among Euro-zone exporters).The 3-month Euribor interest rate, the rate at which Euro-zone banks lend funds to one another, has risen to its highest level since September 20 as credit conditions have tightened, and as a result, ECB President Mario Draghi is expected to address these concerns in the coming weeks. 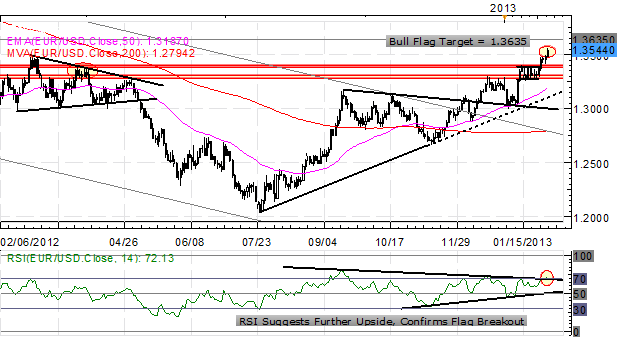 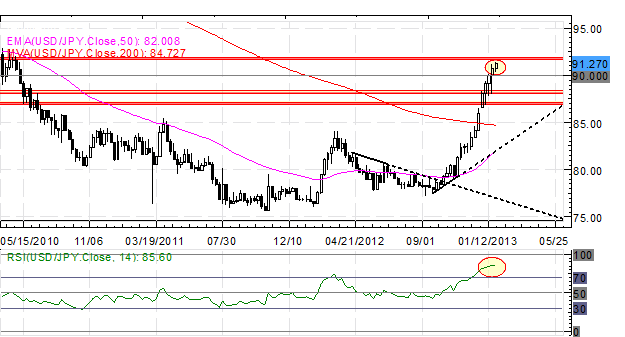 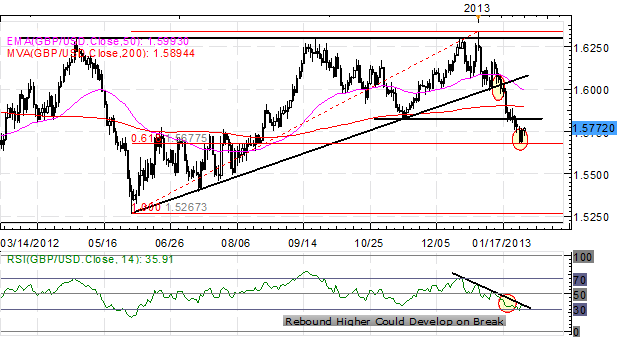 GBPUSD: The pair has rallied off of the 61.8% Fibonacci retracement from the June low to January high, but I maintain: as long as the daily RSI downtrend holds, it is possible for a move lower.” This may break today, signaling an end to the bearish bias for the near-term, and wouldn’t rule out a rally back towards the 50-EMA and significant psychological resistance at 1.5990/6000. Support is 1.5700 and 1.5675/80. 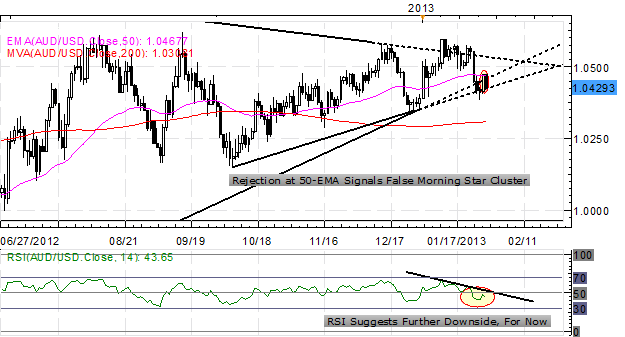 AUDUSD:No change: “The pair continues to range although it has showed signs of cracking, with both the ascending trendline off of the June low and the October low having been breached, as well as the ascending TL off of the June low and the December low. Accordingly, a weekly close below 1.0460 could signal a deeper retracement towards 1.0350/400, before a greater breakdown towards parity. Support comes in at 1.03800/400 (weekly low), 1.0340/50 (December low), and 1.0140/50 (October low). Resistance is 1.0460/70 (ascending TL off of the June and December lows, 50-EMA) and 1.0500/15.” Note: the Morning Star candlestick cluster isn’t seeing any follow through today, as the daily RSI downtrend has persisted. 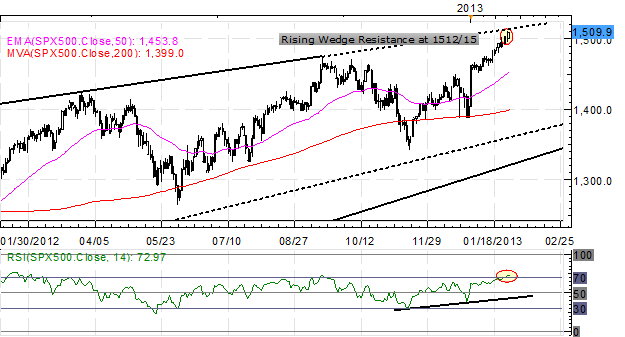 S&P 500: Yesterday I said: “as indicated on the charts the past weeks, noting “nearing the top 1505/1512” – the top was 1504.6. If this breaks, 1520 is in sight.” Indeed, the irrational exuberance has continued, bringing topline Bearish Rising Wedge resistance in focus at 1512/15; the December 2007 highs of 1520/24 could be reached on an overshoot. Bottom line: I’m expecting a crash in the S&P 500 unless volumes accelerate rapidly, given the disconnect from reality. 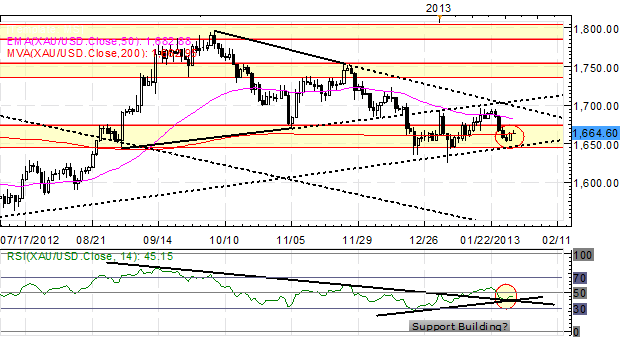