Forex: Euro Rally Versus US Dollar on Pause While Yen Continues to Slide

Yesterday’s potential groundbreaking European Central Bank policy meeting produced a massive rally by high beta currencies and risk-correlated asset; however, there’s been little continuation of this move today. The US Dollar has emerged as the top performer thus far through Friday, as investors take profits and reconsider positioning as various major currencies hover near pivotal levels ahead of next week.

There are two main focuses in FX right now: will the Japanese Yen onslaught continue; and whether or not the Euro is at a fundamental turning point. With respect to the first point, Japanese Prime Minister Shinzo Abe has stepped up his rhetoric for the Bank of Japan to implement a +2.0% yearly inflation target, meaning that speculation about potential policy changes will continue to run high until the January 22 policy meeting. As the meeting approaches, however, it is worth pointing out that the Japanese Yen is simply a very oversold currency. In fact, according to the CTFC’s COT report, net non-commercial futures positioning is at its shortest level since July 2007; the short trade is very crowded. A look at the weekly chart shows that the USDJPY hasn’t posted a negative period since the first week of November. In fact, last week’s RSI was above 80 – the last time that happened was in December 2005, which produced a pullback of >500-pips. Accordingly: seeing the Japanese Yen bottom (xxxJPY pairs top) after the BoJ would not be surprising; the conditions are ripe for a significant turnaround.

In terms of the Euro, the shift in rhetoric by ECB President Mario Draghi from ‘this is a financial crisis’ to now ‘this is an economic-growth crisis’ signals what could be a shift in policy making. Indeed, with no governments requesting a rate cut, a period of calm has descended on Europe. With the US budget negotiations set to reenter the conversation in a few weeks, the Euro could be setting up for a solid 1Q’14. 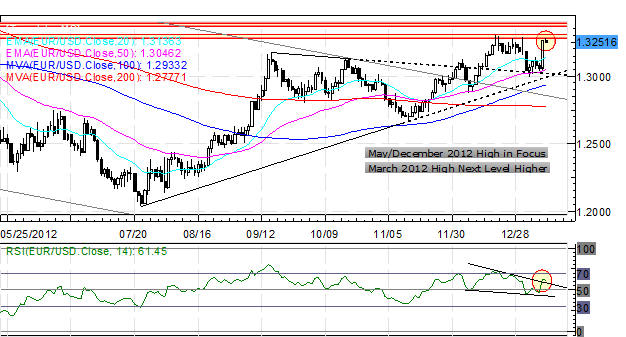 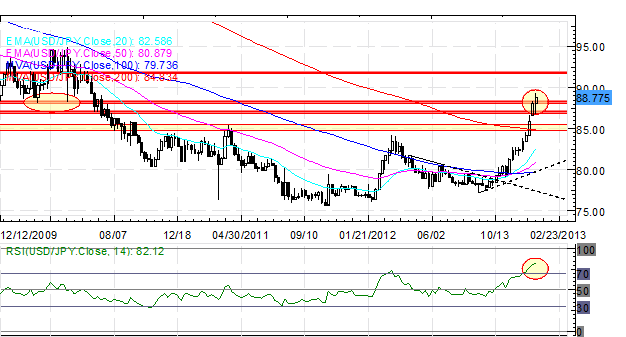 USDJPY: The pair’s rally has continued to its highest level since June 2010, essentially leaving the door open for a run above 90.00. As noted previously, “Given BoJ policy, any dips seen in the USDJPY are viewed as constructive for further bullish price action,” though I would like to clarify that this view is only valid until the BoJ meeting on January 22; the market remains very net-short the JPY, so a near-term top marked by an event seems possible (think the US Dollar bottoming the day after QE3 was announced). Resistance comes at 89.10/35 (daily high, weekly R1) and 90.10/15 (monthly R2). Support comes in at 88.40 (monthly R1) and 87.00/40 (weekly pivot). 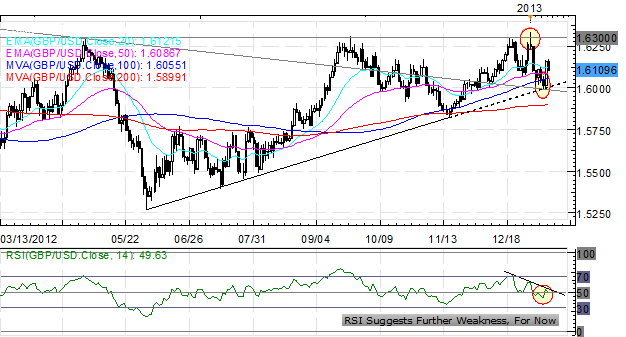 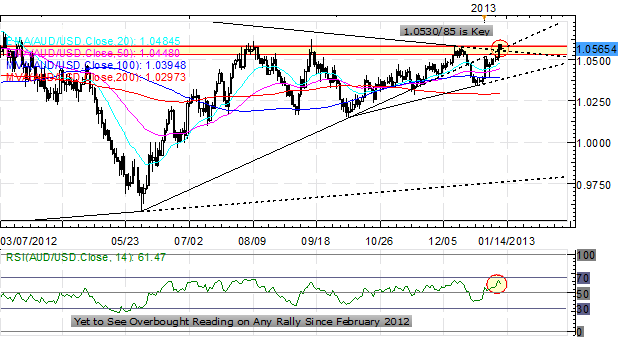 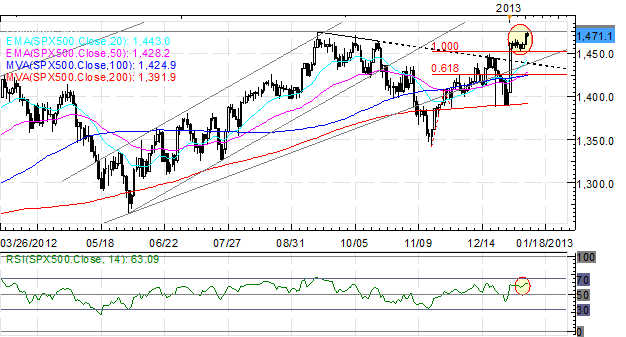 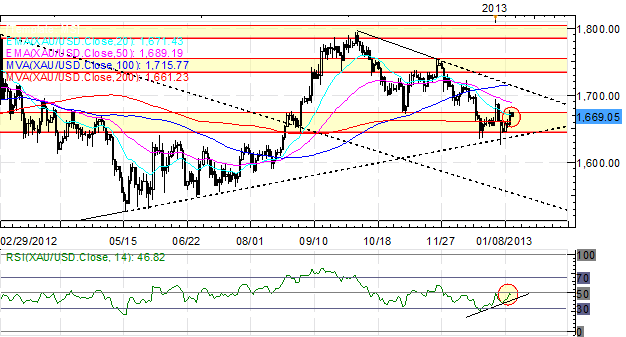