After Friday’s Nonfarm Payrolls report did little to support the US Dollar in the post-December Federal Reserve meeting Minutes trading world, risk-appetite has seemingly steadied if not contracted to start the first full week of the year. The Japanese Yen has posted a solid rebound versus the world’s reserve currency as well as the European currencies despite gapping lower to start the week, as news headlines over the weekend suggested that new Japanese Prime Minister Shinzo Abe was increasing pressure on the Bank of Japan to endorse a +2.0% yearly inflation target at its next meeting on January 22.

Mainly, the Yen’s rebound can be credited to extremely oversold technical condition, with many Yen-crosses posting multi-month or multi-year highs in the past week. The market also remains biased short the Yen, with the most recent CFTC’s COT report showing net non-commercial futures positioning holding near its lowest levels since July 2007, despite short covering into the end of December. Fundamentally and psychologically speaking, any perceived shift in BoJ policy leading up to the meeting could lead to continued Yen weakness from now until then, whereas the Yen could strengthen once policy is solidified (similar to the US Dollar strengthening after the Fed announced QE3 in mid-September).

Away from the safe havens, the commodity currencies remain well-supported with the New Zealand Dollar notably outperforming, while the Euro has led the European currencies lower (the Swiss Franc is a follower given the EURCHF floor). This more or less has to do with the expectation that the European Central Bank will not implement any new policies this week. As I expressed in the Euro’s Weekly Trading Forecast, each meeting following the initial OMT announcement has led to greater and greater weakness; and now that the market is no longer short the Euro versus the US Dollar, there is significantly more room for weakness in the EURUSD. 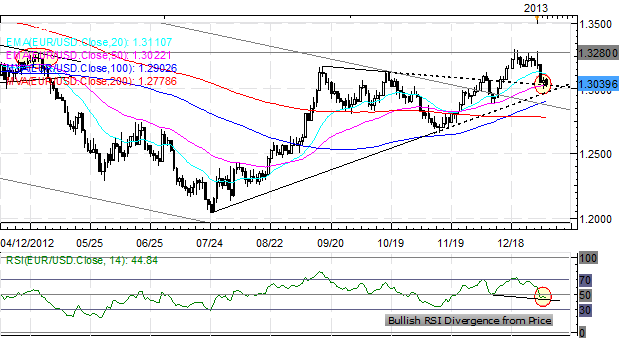 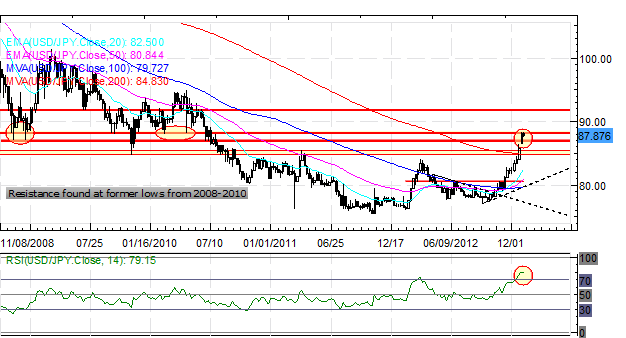 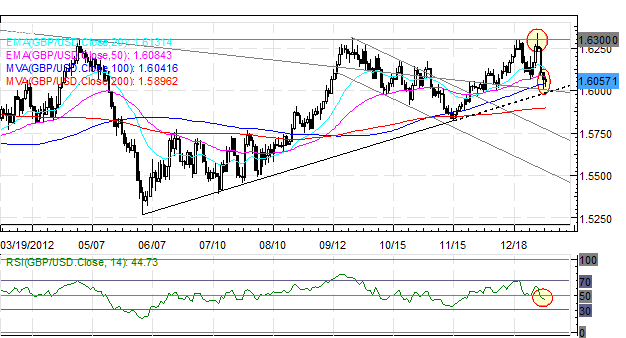 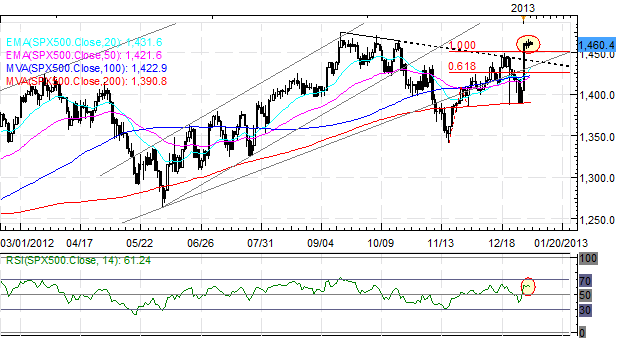 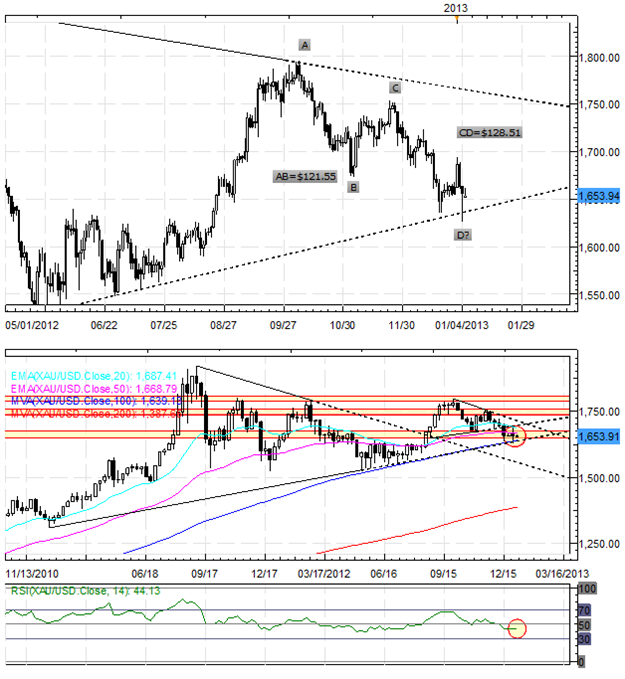 GOLD: TOP CHART: Daily; BOTTOM CHART: Weekly. Gold is at a make or break level right now, former Symmetrical Triangle support at 1630/40, and its lowest level since August, before the ECB and the Fed’s QE intervention hopes took hold. Additionally, when considering the move off of the September highs, a measured A-B=C-D (as expressed on the Daily) suggests that a bottom could be in place at these levels as well. Support is there at 1580. Resistance is 1690/95, 1735, 1755, and 1785/1805.