Forex: US Dollar Up After Fed Minutes, Before NFPs; Yen Worst Again

The US Dollar is the strongest major currency ahead of the crucial Nonfarm Payrolls report for December, as investors around the globe remain enamored by the Federal Reserve’s December meeting Minutes. Yesterday, the US Dollar took a strong turn higher after news broke that the Fed was divided over the duration of its newest QE program, with some policymakers suggesting that QE might come to an end at some point during 2013.

While this has led to a rise in US Treasury yields, it is of my belief that the market reaction behind the US Dollar is nonsensical. We know the exit parameters of the Fed’s QE3 – the Evans Rule – which states that the Unemployment Rate (as measured by U3) has to be below 6.5% or various gauges of yearly inflation rise above +2.5%.

In reality, neither of these situations are likely to play out in 2013. The fiscal cliff resolution raises taxes on many individuals, which should dampen consumption slightly; this in turn will reduce demand-push inflation (prices rise due to increased demand). For the labor market, the recent drop in the Unemployment Rate has coincided with a decline in participation, thus making the drop almost artificial. Instead, looking at the Underemployment Rate (as measured by U6) and the participation rate of middle-aged men, it’s clear that significant structural weaknesses remain. Take yesterday’s ADP Employment Change report, for example: an enormous beat on the headline, yet manufacturing jobs were still shed.

This leads us to today’s Nonfarm Payrolls report for December. Estimates are all over the place, ranging from +80K to +305K; consensus calls for +145K to +153K. Recent trends suggest that these are not only reasonable estimates, but when considered in the scope of jobs growth in 4Q’11 and 4Q’10, anything greater than +190K would be an astonishing accomplishment. 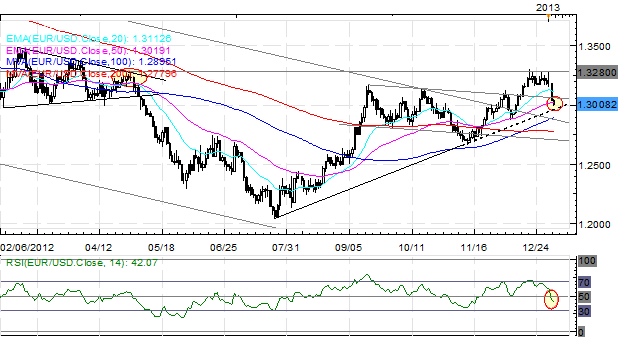 EURUSD: No change: “The pair failed once again at its May highs, posting a massive reversal yesterday (Inverted Hammer) and trading towards the descending trendline off of the September and October highs. The bearish RSI divergence seen on the daily chart (as well as the 4H) is being resolved, setting up a potential buying opportunity in the coming days; however, negative momentum is proving swift.” Support comes in 1.2950/65 (ascending TL off of July and November lows) and 1.2875/95. Resistance is 1.3050/60, 1.3170, 1.3280/85, and 1.3380/85 (mid-March swing high). 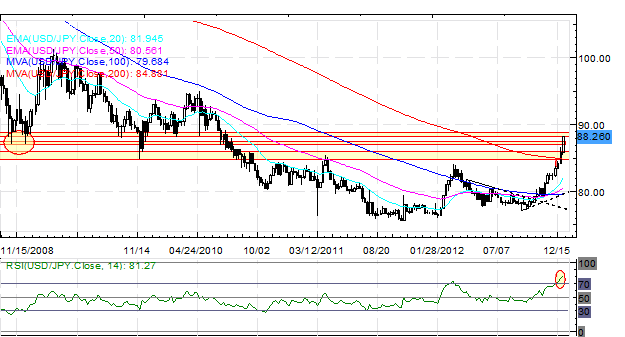 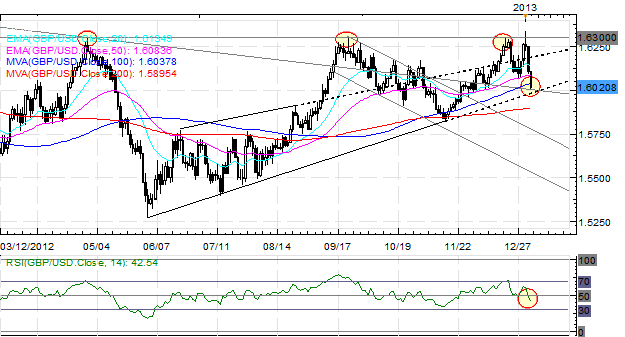 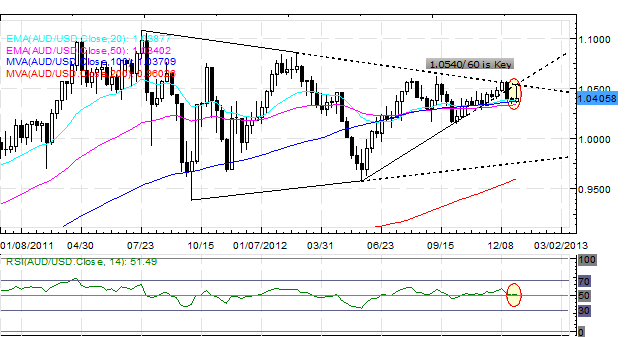 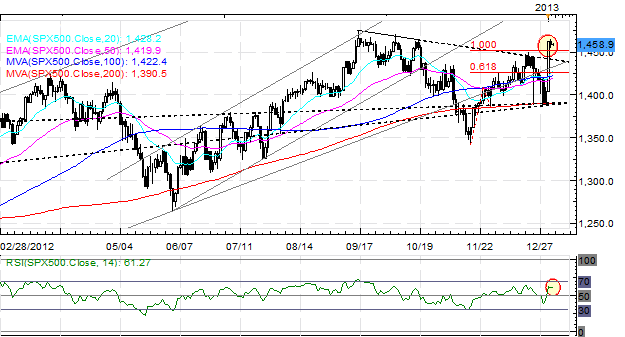 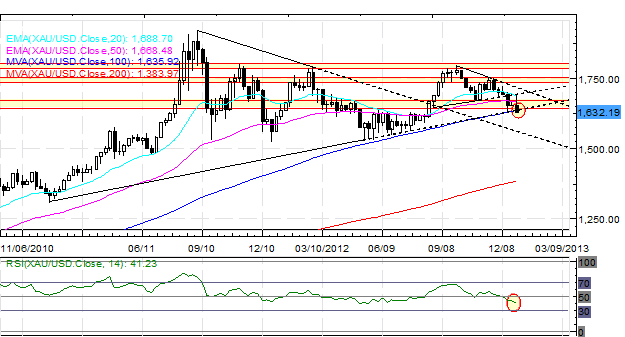 GOLD: Gold is at a make or break level right now, former Symmetrical Triangle support at 1630/40, and its lowest level since August, before the ECB and the Fed’s QE intervention hopes took hold. Additionally, when considering the move off of the September highs, a measured A-B=C-D suggests that a bottom could be in place at these levels as well. Support is there at 1580. Resistance is 1690/95, 1735, 1755, and 1785/1805.