Forex: EUR/USD at May High Despite Fiscal Cliff Standoff

Price action in the FX market is very evidently being driven by the European currencies, with the British Pound and the Euro continuing their recent bull run against the safe havens and the commodity currencies, despite several significant roadblocks appearing on the near-term horizon. For today, however, this looks less like a short covering rally but rather additional risk taking into yearend; and with the Federal Reserve easing and the Bank of Japan creeping towards a major stimulus package, central banks deserve a great deal of credit.

Regardless of how markets arrived at their current juncture, what’s important to consider is what the road ahead might be, as exuberance over a calming in Europe seems to be getting back towards those eye-rolling levels (when leaders start declaring that the crisis is over, it tends to rear its ugly head; as the EU’s Jean-Claude Juncker did on Friday by saying “we see light at the end of the tunnel,” hopefully that light isn’t an incoming train), and the US fiscal cliff situation is coming down to the wire.

With respect to the US fiscal cliff/slope, there appear to be two narratives that have formed: first, that President Barack Obama (D) and Speaker of the House John Boehner (R-OH) are finding more and more common ground at each meeting; and second, that those leaders behind the respective negotiators for both sides have dug themselves into their partisan trenches. The only way a deal doesn’t get done is if Republicans do not budge on the issue of taxes; but considering that Republicans lost the Presidential election, lost seats in both the House and the Senate, and lost all three popular votes (Presidential, Senate, and House), it would be a devastating blow to Republicans’ midterm election hopes if they’re viewed as obstructive. In my opinion, a deal will get done, even if it’s done just to save face. 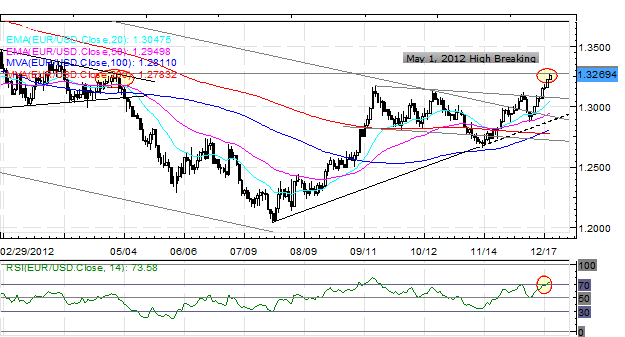 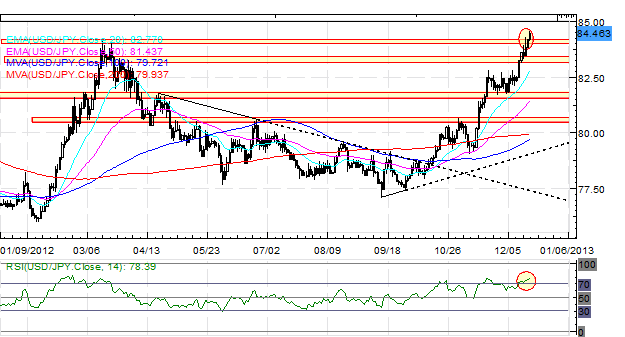 USDJPY: The Bull Flag that broke above 82.90 continues to play out, with only two days of reprieve coming for the fast rising pair. Data continues to hurt the JPY side of the equation, and with a heavily anticipated BoJ meeting on the horizon, further rallies could be around the corner. Support comes in at 84.00/20, 83.45, and 81.90.Resistance is 85.50/55 (post-Fukushima earthquake intervention high). 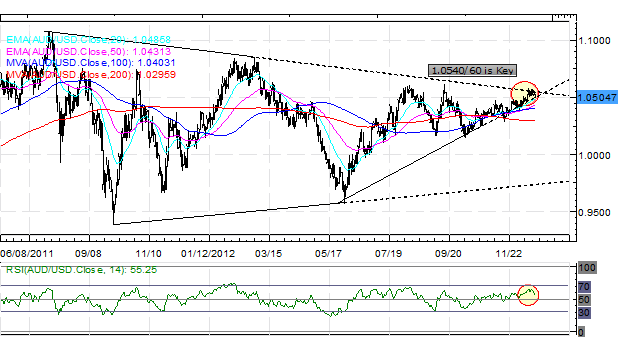 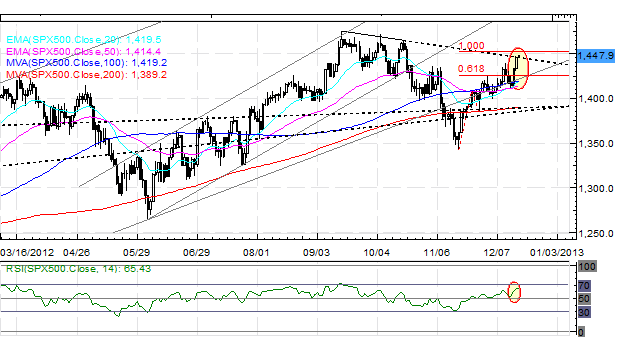 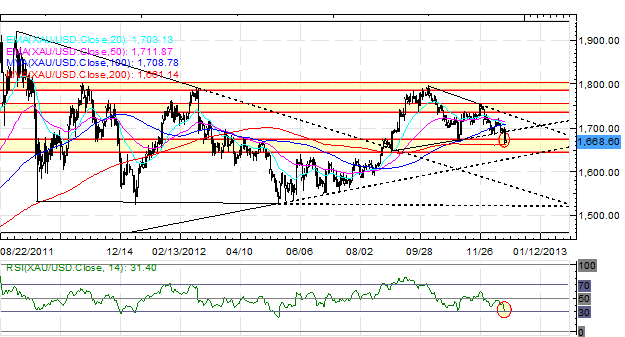 GOLD: As noted previously, “December is historically a bad month for precious metals. I will continue to look to get long as low as 1675.” While I’m interested in price down here, selling pressure is intense; though I suspect that a retest of the breakout leading up to QE3 in September could draw buying interest again at 1645. Resistance is 1700, 1735 and 1755/58. Support is 1661 (200-DMA) and 1645.