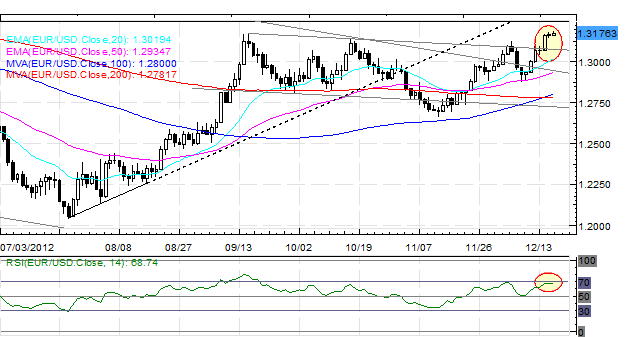 Forex: Euro Continues to Outperform; Investors Wait on BoJ for Next Yen Move

After a tremendous amount of excitement in FX markets the past few days, trading conditions are already starting to settle down ahead of the week-long holiday, beginning next Monday. Typically, during the last week of the year, most traders step away from their desks to spend time on holiday; and this leads to substantial drop in volume and market participation rates.

But for now, despite this light news flow that has allowed the S&P 500 to trade back towards its December highs in the overnight, some significant headline risk remains on the horizon.

To start, the Bank of Japan has started its two day policy meeting that is expected to result in substantially more accommodative policy. In fact, newly elected Japanese Prime Minister Shinzo Abe has reportedly told BoJ Governor Masaaki Shirakawa that he wants a +2% yearly inflation target, in what would amount to doubling of the target and even a greater multiplier of quantitative easing. Needless to say, if the BoJ decides to fall in line behind the new prime minister, it will become a fiscal policy tool; and investors might immediately revert to their old ways and shed the Yen, if the threat of intervention becomes tangible.

The other major story affecting FX markets is the fiscal cliff/slope. Certainly, given the performance of high beta currencies and risk-correlated assets the past few weeks, one would be led to believe that a deal may be around the corner – risk-aversion is absent. President Barack Obama’s (D) new plan would raise $1.2 trillion in new revenue (hike taxes above those making $400K per year) and would cut $1.22 trillion in spending, initial reports suggest. Speaker of the House John Boehner (R-OH) would prefer to raise taxes only on those making $1 million or more per year; but a concession of some demands by both sides shows that an amicable resolution is getting closer.

There are no important data on the docket to be released during the US trading session on Tuesday.

EURUSD: No change: “Price action Friday led to an enormous breakout in the US session, bucking recent conventional wisdom that afternoon US trading sessions at the end of the week tend to be bland. The same descending trendline off of the September and October highs which served as resistance throughout December broke, allowing for a quick move up towards the post-QE3 September high at 1.3170/75. Now, support is 1.3145, 1.3075/90, and 1.3010/30. Resistance is 1.3170/75 (breaking now) and 1.3280/85 (May high).” 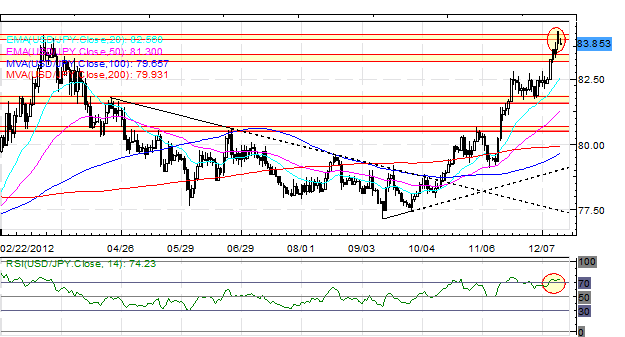 USDJPY: No change: “The Bull Flag on the daily broke on Thursday above 82.90; and the pair peaked near the mid-March highs above 84.00. As noted last week, ‘With the Fed out of the way, the Yen’s fundamentals could help lift this pair higher.’ Now, with the USDJPY at significant resistance and the Japanese elections done, some sideways if not bearish price action could result. Support comes in at 83.30/55, 82.90/83.00, and 81.75.Resistance is 84.00/20 (March high).” 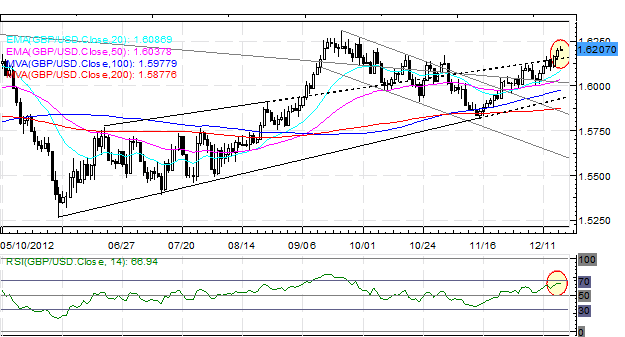 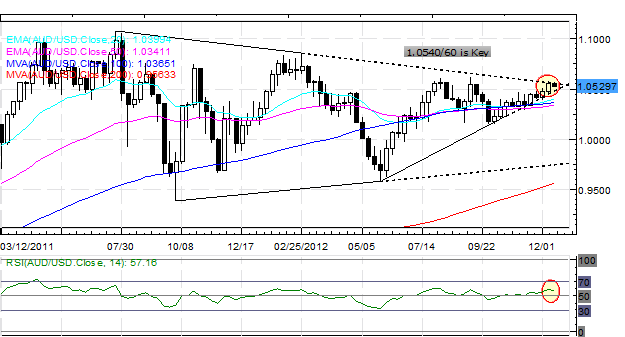 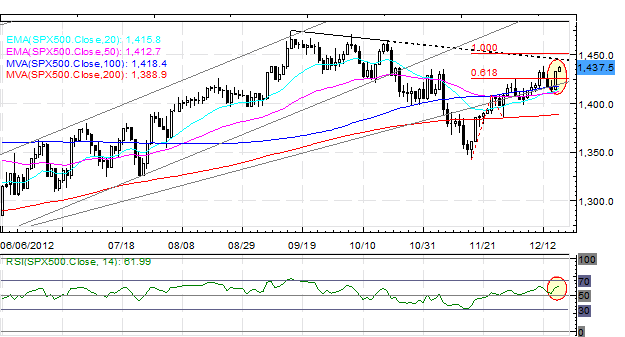 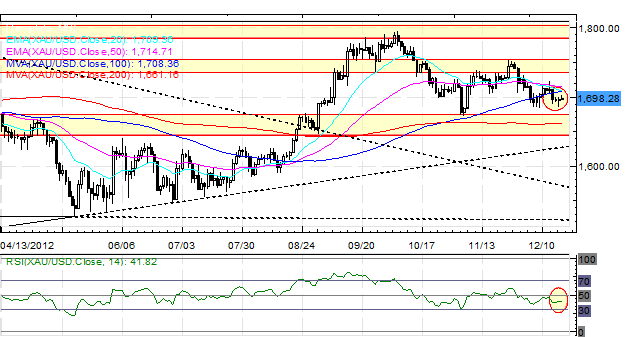