FX markets are askew to start the week following significant Japanese election results, which will now likely yield a much more dovish Bank of Japan. Shinzo Abe’s Liberal Democratic Party won a sweeping majority in the lower house of parliament, and with another faction now has the two-thirds majority vote to essentially legislate unabated. What will this new government bring?

If anything is expected to come from this election, it’s that the BoJ would be much weaker: an unlimited easing scheme is in the cards, as is a doubling of the central bank’s inflation target. Given the fact that this most likely will entail some combination of large scale asset purchases, expanding the balance sheet, and/or implementing negative interest rates, it’s of little surprise that the Japanese Yen has been under pressure since mid-November, when then-Prime Minister and former BoJ Governor Hiroshiko Noda announced snap elections.

But thus far, it appears that the Yen is doing its best impersonation of the US Dollar and the Federal Reserve’s QE3 announcement in September; this is another ‘buy the rumor, sell the news’ type of event. The Yen immediately gapped lower to start the week, but has since recovered ground – and on the surface, given Mr. Abe’s intended policies for the BoJ, this makes little sense. But a deeper look into various Yen-crosses (AUDJPY, EURJPY, USDJPY) suggests that a technical rebound could be due, as price has found itself to significant multiyear levels of resistance. Furthermore, when considering positioning, as measured by the CFTC’s Commitment of Traders report, net non-commercial futures positions are at their shortest level since July 2007. In other words, being short the Yen is very popular right now, and few sellers remain; risk-reversal (for Yen strength) is high. 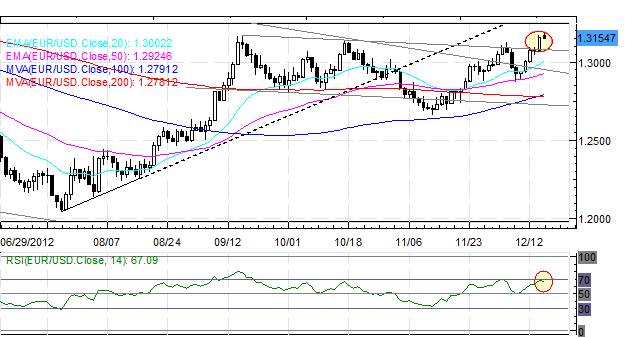 EURUSD: Price action Friday led to an enormous breakout in the US session, bucking recent conventional wisdom that afternoon US trading sessions at the end of the week tend to be bland. The same descending trendline off of the September and October highs which served as resistance throughout December broke, allowing for a quick move up towards the post-QE3 September high at 1.3170/75. Now, support is 1.3145, 1.3075/90, and 1.3010/30. Resistance is 1.3170/75 and 1.3280/85 (May high). 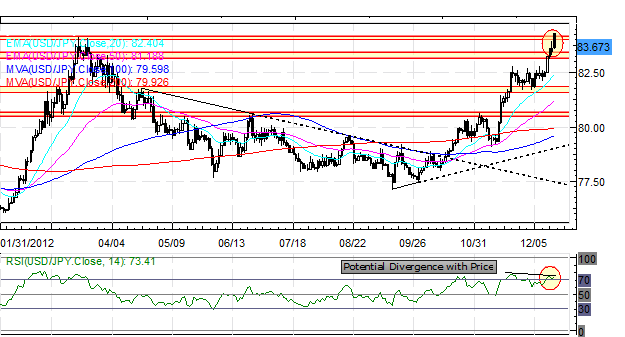 USDJPY: The Bull Flag on the daily broke on Thursday above 82.90; and the pair peaked near the mid-March highs above 84.00. As noted last week, “With the Fed out of the way, the Yen’s fundamentals could help lift this pair higher.” Now, with the USDJPY at significant resistance and the Japanese elections done, some sideways if not bearish price action could result. Support comes in at 83.30/55, 82.90/83.00, and 81.75.Resistance is 84.00/20 (March high). 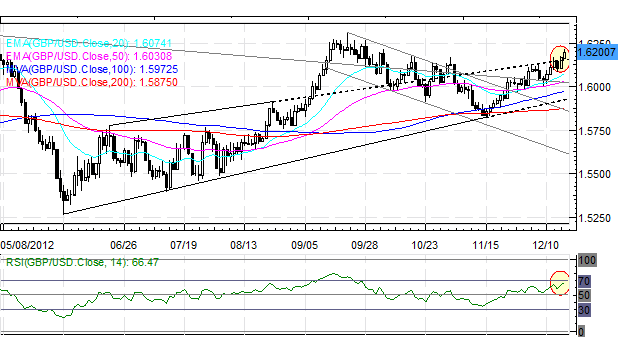 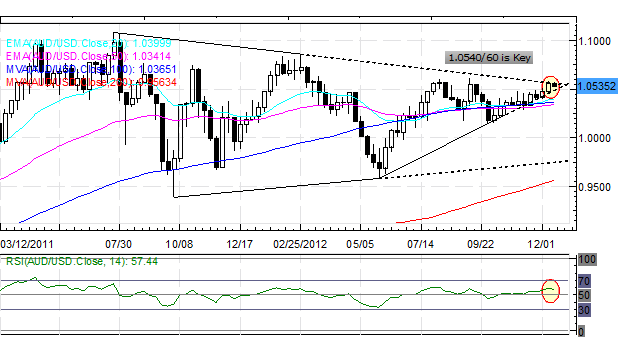 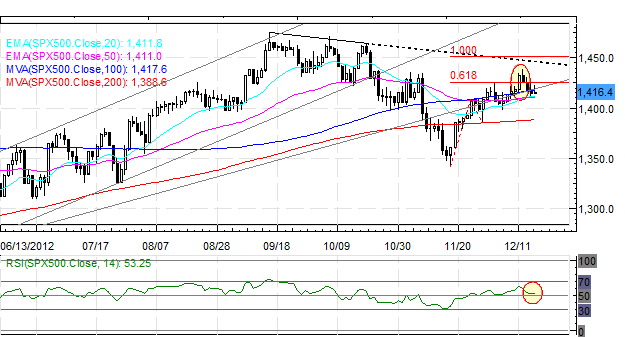 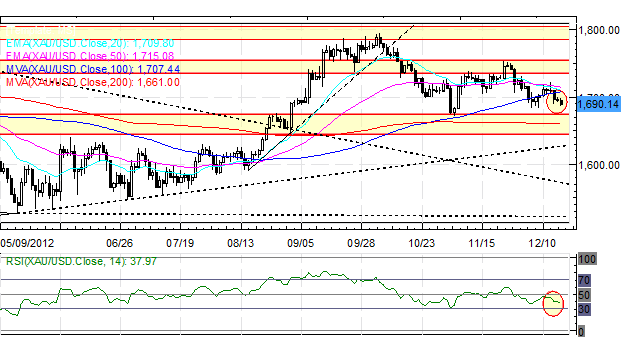