Forex: US Dollar Down Before Hyped FOMC Meeting - What to Expect

Risk appetite has improved overnight, as expected, with investors gearing up for the Federal Reserve’s December meeting. To be clear, FOMC meeting days are very bullish for investors. In fact, the economists at the New York Fed have drawn together some statistics that suggest that if there was ever a day to be bullish, it would be on days like today: since 1994, “more than 80 percent of the equity premium on U.S. stocks has been earned over the twenty-four hours preceding scheduled Federal Open Market Committee (FOMC) announcements.”

Today is a particularly interesting day, then, considering that expectations for a new QE package are exceptionally high. Consensus forecasts are calling for the Fed to implement a $45 billion/month outright Treasury purchase program to replace Operation Twist. When combined with QE3, the agency MBS program announced in September, the Fed’s balance sheet would be on pace to expand by $85 billion per month, bringing the Fed’s balance sheet to over $4 trillion in 1Q’14.

When considering what happened after QE3 was announced and when considering these FOMC trading day statistics, it’s possible that we see the US Dollar bottom after a reactionary low, and we see a slow sideways/upside grind higher, like we did in late-September and October. With a number of the major currencies reaching key resistance levels, both the fundamentals and the technicals may be aligning for a pullback in risk-appetite for the rest of the week. 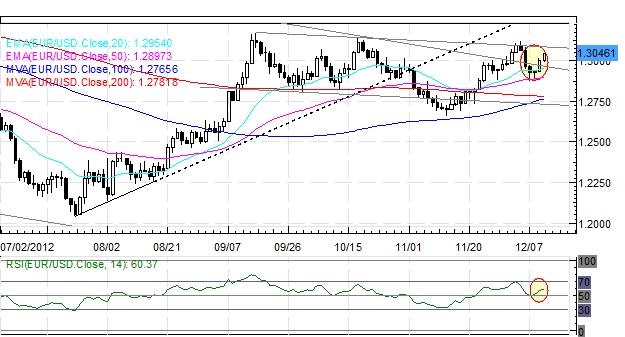 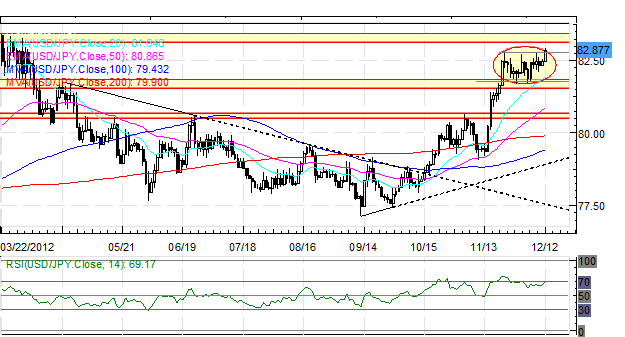 USDJPY: The Bull Flag on the daily chart is starting to break to the upside; validation could see this pair back to the mid-March highs above 84.00. Otherwise, little has changed: More range-bound price action as the pair fights diametrically opposite fundamental pressures (US fiscal cliff and Japanese elections), thus leaving my levels and outlook at neutral to bullish now. Support comes in at 81.75, 81.15, and 80.50/70 (former November high).Resistance is 82.90/83.00(testing now) and 83.30/55. 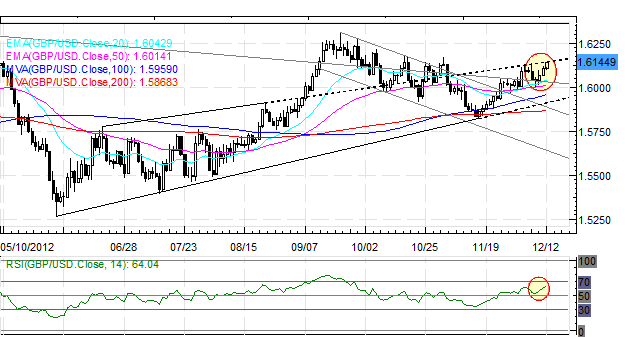 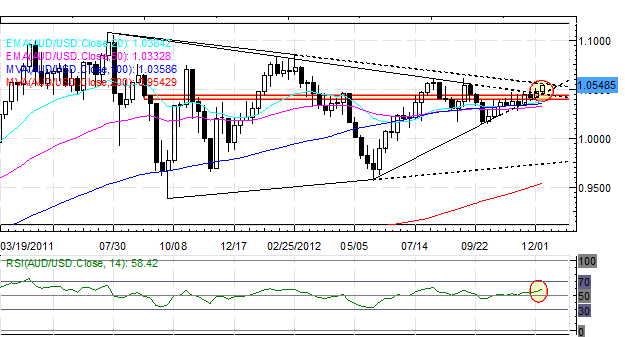 AUDUSD:The AUDUSD is looking increasingly bullish now that 1.0500/15 has been cleared, although there’s one more hurdle in place: descending trendline resistance off of the July 2011 and February 2012 highs, which comes in at 1.0555 today, just below the monthly R2 at 1.0570. Overall, the Symmetrical Triangle appears to be making a move to the upside; when considered in the big picture, the current pause witnessed the past year or so may be viewed as a consolidation. Support is at 1.0500/15, 1.0460, and 1.0235/80. Resistance is 1.0555/75 and 1.0605/25 (August and September highs). Note: this is a weekly chart to highlight how close the AUDUSD to a potential breakout. 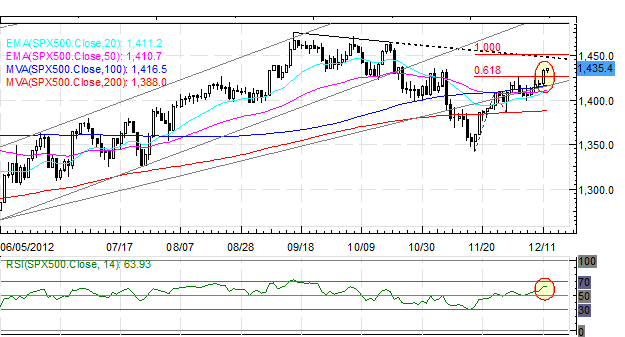 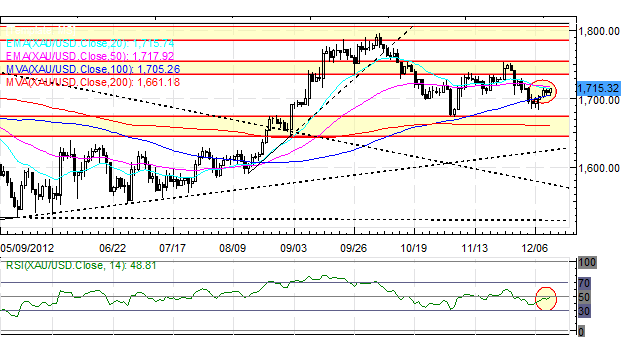