High beta currencies and risk-correlated assets have been steadily improving over the past several hours as a combination of better than expected data and positive news out of the Euro-zone has restored some near-term confidence in the single currency. The Euro is the day’s top performer, trading back towards 1.3000 against the US Dollar, as the December German ZEW Survey easily beat forecasts, and the Greek debt buyback is going as scheduled, a surprise for Greece considering policymakers have consistently disappointed the past several years.

While the German ZEW Survey for December didn’t reflect any optimism over the Current Situation, the Economic Sentiment gauge came in at its first positive value and highest since May 2012. Considering that the Economic Sentiment index registered -15.7 in October, the reading of 6.9 (against a forecast of -11.5) is a very significant improvement – certainly, if growth in the Euro-zone core is expected to pick back up in late-1Q or 2Q’13, we could see the periphery’s fundamentals start to steady as well.

Certainly, with news out of Europe improving and the US fiscal cliff/slope debate at a standstill (while no progress, no regression either), assets with higher yields, like the Australian and New Zealand Dollar could remain elevated against the Japanese Yen and the US Dollar. When considering that the Federal Reserve meets tomorrow and is expected to announce another QE program – either an extension/expansion of QE3 (agency MBS) or a new QE4 (outright Treasury purchases, like QE2) – the US Dollar could take a significant beating the next few days. Globally, markets are aligning for improved risk-appetite; even Italian and Spanish bonds are rebounding. 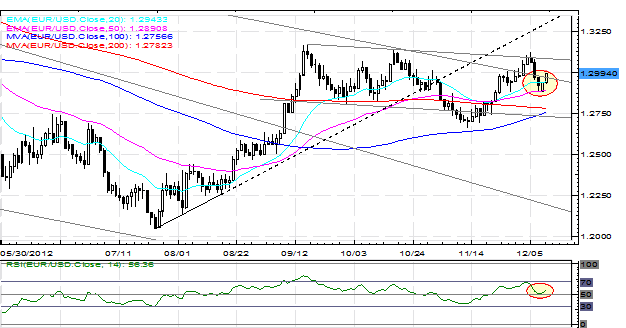 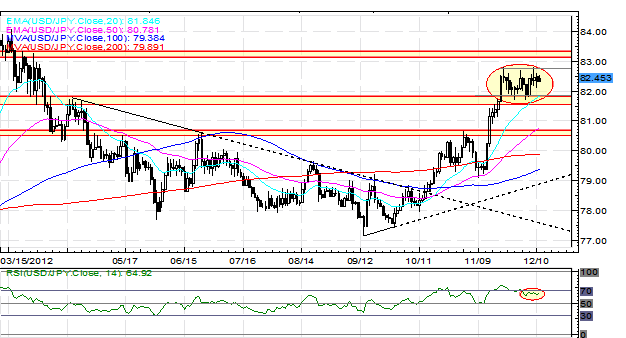 USDJPY: No change, although a Bull Flag is in place on the daily chart: “More range-bound price action as the pair fights diametrically opposite fundamental pressures (US fiscal cliff and Japanese elections), thus leaving my levels and outlook at neutral to bullish now. Support comes in at 81.75, 81.15, and 80.50/70 (former November high).Resistance is 82.90/83.00 and 83.30/55.” 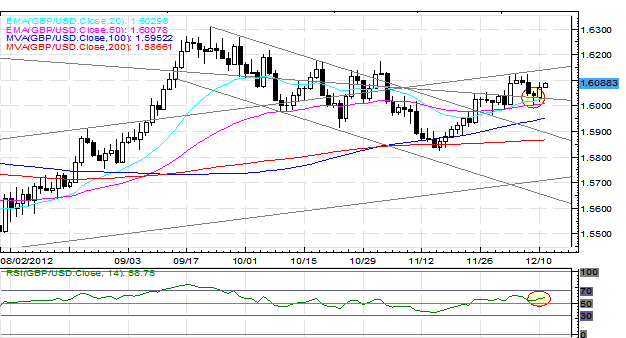 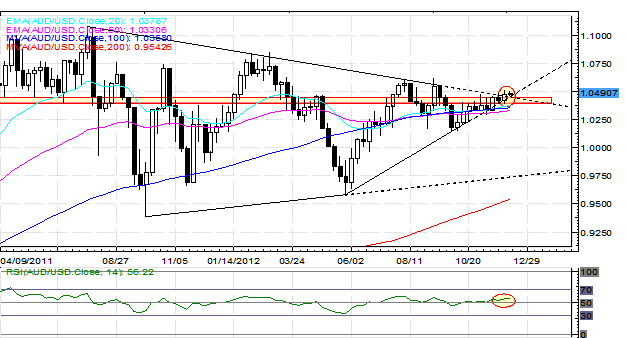 AUDUSD:The AUDUSD has started to poke out of its major technical pattern, though until 1.0500/15 is cleared, there’s little reason for excitement. As the pair has traded towards its Symmetrical Triangle termination point, and appears to be making a move to the upside; when considered in the big picture, the current pause witnessed the past year or so may be viewed as a consolidation. Support is at 1.0435/45 and 1.0235/80. Resistance is 1.0475/90 and 1.0500/15. Note: this is a weekly chart to highlight how close the AUDUSD to a potential breakout. 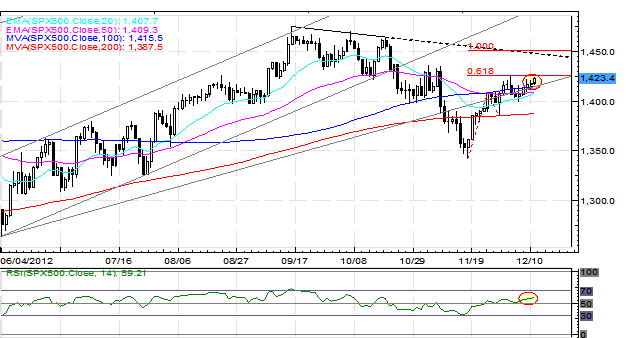 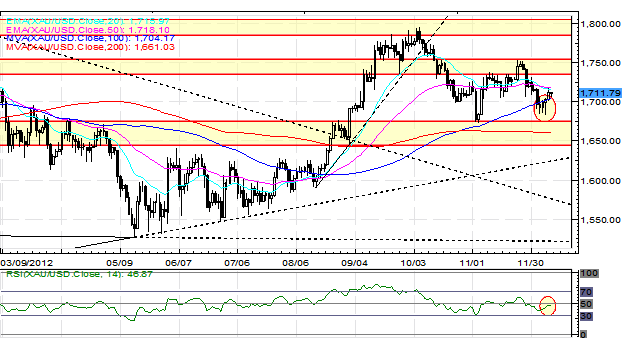