The Asia session today was perhaps the most exciting in recent memory, with the Chinese Shanghai stock index surging amid speculation that the new Chinese government would be more lenient towards stimulus, and the Japanese Yen sliding sharply amid comments from a key Bank of Japan policymaker. Overall, the mood of the day is uneasiness, with European and US equity markets looking higher, while bonds and currencies suggesting risk-aversion.

But the BoJ commentary is particularly interesting (with BoJ Deputy Governor Kiyohiko Nishimura saying the central bank was ready for action, when needed), especially with snap elections taking place on December 16, in which former Japanese Prime Minister Shinzo Abe is expected to reclaim his position following promises of unlimited BoJ easing. Seemingly, the role of the BoJ has become a focus point of the Japanese election, given the attention the failing economy has garnered over the past year. Should the US fiscal cliff/slope produce some positive headlines over the coming days, and if the European debt crisis stays on the backburner, then the Japanese Yen could remain weaker for at least through the end of the year.

Taking a look at European credit, peripheral bond yields are higher, underpinning Euro weakness. This price action comes as European equity markets have outperformed, but this has been the cast for the past few weeks: decoupling. As Senior Technical Strategist Jamie Saettele’s research suggests, equity markets are the last major asset class to react to news, while bonds and commodities lead (currencies trail just slightly but are well-ahead of equity markets). 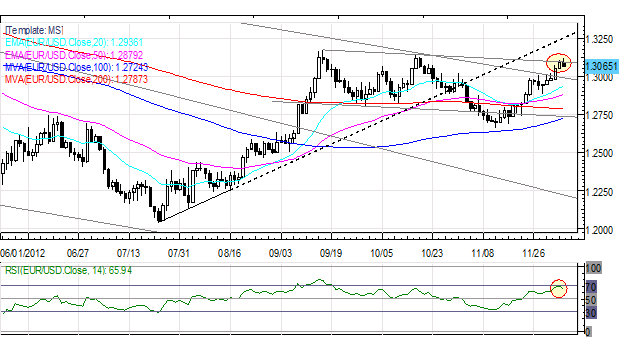 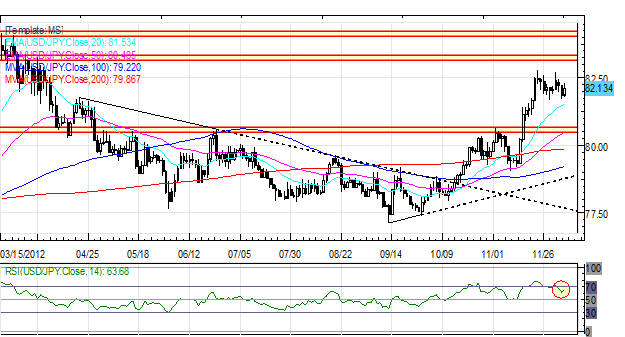 USD/JPY: More range-bound price action as the pair fights diametrically opposite fundamental pressures (US fiscal cliff and Japanese elections), thus leaving my levels and outlook at neutral to bullish now. Support comes in at 81.75, 81.15, and 80.50/70 (former November high).Resistance is 82.90/83.00 and 83.30/55. 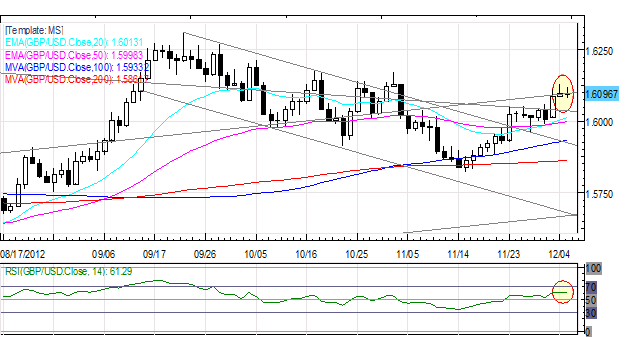 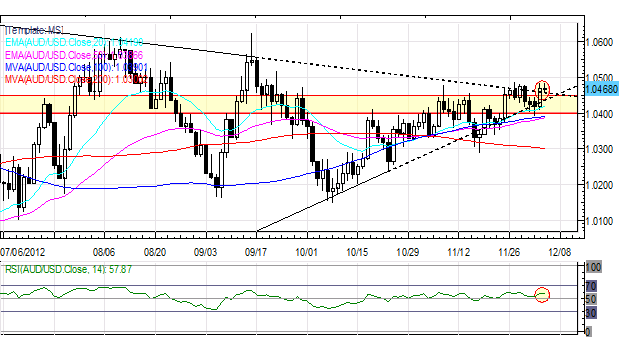 AUD/USD: The AUD/USD has been range-bound the past week, leaving my outlook unchanged since last Wednesday: “As the pair has traded towards its Symmetrical Triangle termination point, and appears to be making a move to the upside; when considered in the big picture, the current pause witnessed the past year or so may be viewed as a consolidation. Support is at 1.0370/1.0405 (trendline support off of the June 1 and October 23 lows) and 1.0235/80. Resistance is 1.0475/90 (November high) and 1.0500/15.” 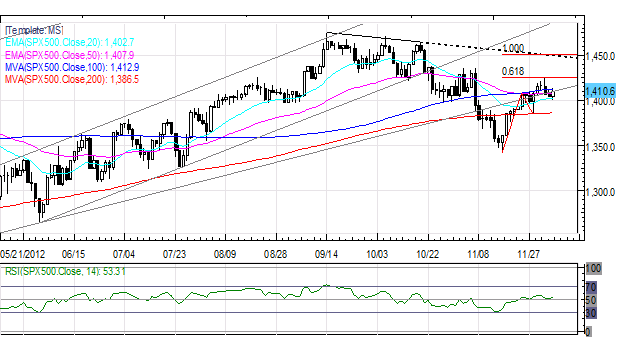 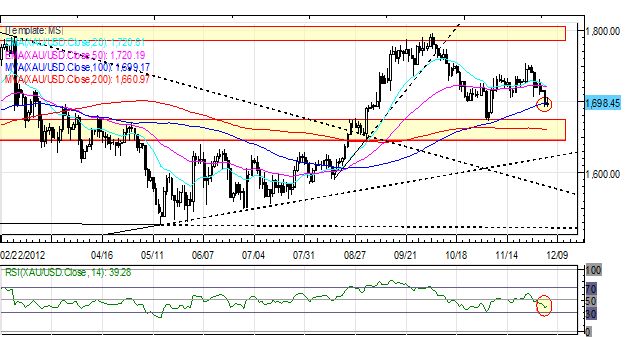