Forex: Aussie Leads Despite RBA Rate Cut - What Does it Mean?

This column typically focuses on events occurring in Europe but today my interest is piqued by price action that the Australian Dollar has exhibited in the wake of the Reserve Bank of Australia cutting its key interest rate, from 3.00% to 3.25%, at its final meeting of 2012. While the AUDUSD fell towards 1.0400, it quickly recovered and is sitting a few dozen pips from 1.0500, undermining the longstanding notion that rate cuts produce weaker currencies, while rate hikes produce stronger currencies.

Mainly, the one hitch to this rule is that if an event is “priced in,” then it will not yield the expected outcome – the asset’s price as already adjusted. Taking a look at the Credit Suisse Overnight Index Swaps, there was a 92% chance of a 25-basis point cut – a near “certainty” for traders positioning themselves ahead of the announcement. Thus, today’s price action is fairly typical – the AUD/USD is not rallying on the rate cut itself, but the shifting of expectations from a declining rate environment to a stable one, at least for the next few months. It’s also worth exploring some parallels between prior RBA Rate Decisions with this one.

Like last December, the RBA has again cut its key rate ahead of the January recess. Like this June (ruling out September as there was no expectation for a rate cut, the RBA has made a significant move ahead of a key string of data: 3Q’12 GDP on Wednesday; November labor market data on Thursday; and October trade data on Friday. Here’s the striking difference that piqued my initial interest: the RBA was expected to cut in June, just like today, ahead of its key stretch of data, but it did not, and 1Q’12 GDP and May labor market data outperformed forecasts by miles each. Instead, this RBA chose to cut its rate in line with heavy expectations. As mentioned earlier, the cut could be attributed to preemptive policy action amid the January holiday; or it could mean that the data due in the coming days is unlikely to outperform. 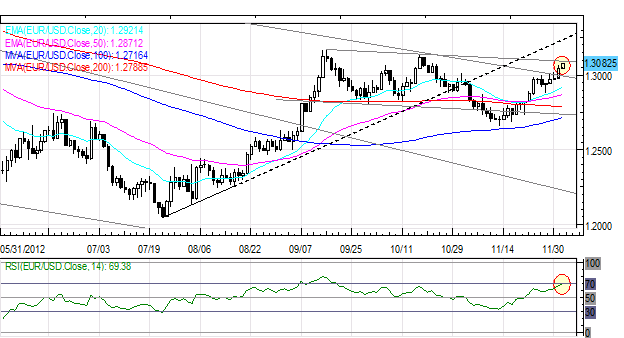 EUR/USD: Yesterday I said: “The EUR/USD closed November near its monthly high and has started December out on a positive note, which portends to further gains given seasonal tendencies. For now, however, we remain neutral, if not close to shifting to bullish for the near-term, as the daily RSI nears overbought territory ahead of a run at 2H’12 highs.” With price breaking 1.3010/20, I am indeed bullish. However, with 1H, 4H, and daily RSI all at or nearing overbought levels as the pair trades into its weekly R2 at 1.3100 and comes close to 2H’12 highs, there is likely some resistance ahead, if not scope for a pullback. Resistance is 1.3140/45 and 1.3170/75. Support is 1.3010/20 and 1.2880. 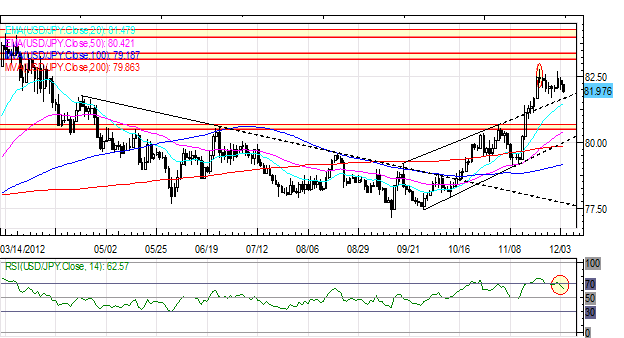 USD/JPY: Yesterday I said: “A Bearish Engulfing bar is forming today, as failure at recent highs on Friday has led to a small pullback. With US policymakers issuing partisan commentary by the end of the week, the fundamental impetus to move higher was somewhat diminishing.” The pair has continued to drift lower, but my levels remain untouched. Support comes in at 81.75, 81.15, and 80.50/70 (former November high).Resistance is 82.90/83.00 and 83.30/55. 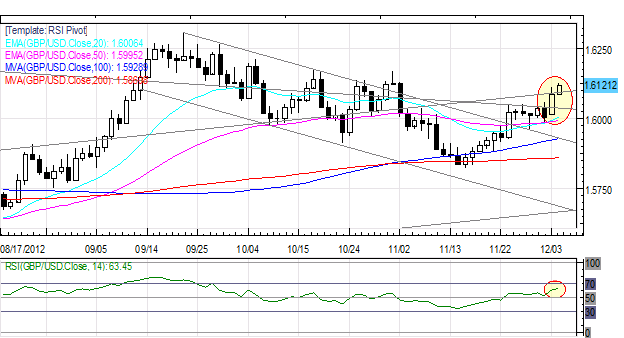 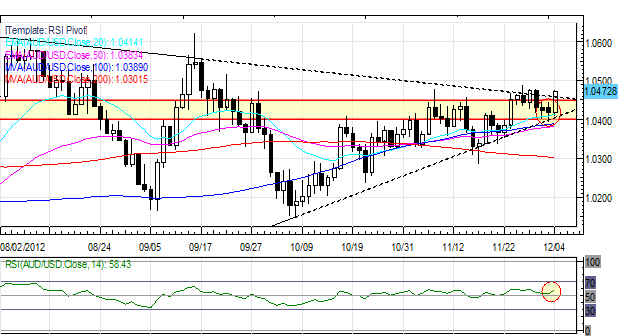 AUD/USD: No change from Wednesday: “As the pair has traded towards its Symmetrical Triangle termination point, and appears to be making a move to the upside; when considered in the big picture, the current pause witnessed the past year or so may be viewed as a consolidation. Support is at 1.0370/1.0405 (trendline support off of the June 1 and October 23 lows) and 1.0235/80. Resistance is 1.0475/90 (November high) and 1.0500/15.” 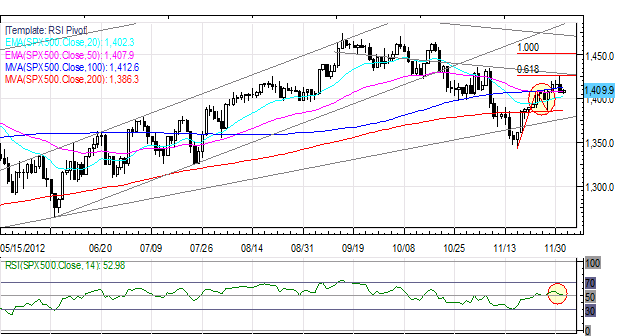 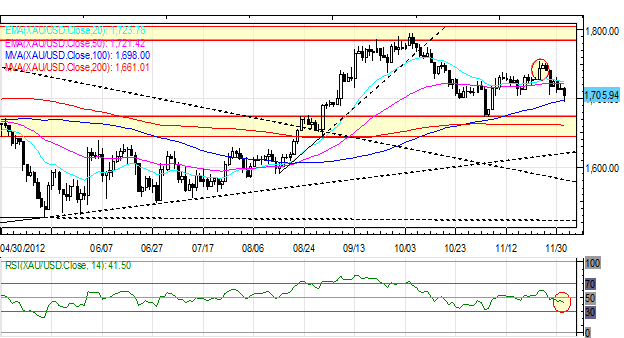