Forex: Euro, Yen Higher Against US Dollar to Start December

The beginning of the month offers new seasonal trends and a final period of trading for those investors left behind during the mid-summer rally. Indeed, if there was a time for those behind in their returns to scoop up some profit before closing the books for the year, it’s now: since 1950, the S&P 500 has gained, on average, +0.082% per trading session in December, good for an average monthly return of +1.72%. This amounts to nothing short of the (in)famous Santa Claus rally that will dominate mainstream media financial news coverage for the coming few weeks.

Boosted by some improving global PMI figures, particularly in Asia (Europe still looks weak, especially on the periphery), December has started out with a bang for global market participants, with the US Dollar underperforming on the whole, while riskier currencies like the Euro, and even the heavily manipulated currencies (then again, which aren’t these days?) the Japanese Yen and the Swiss Franc, are posting gains against the US Dollar.

There are two valid interpretations of today’s FX price action, which has seemingly diverged from typical correlations with other asset classes. While European equity markets and US stock futures are higher, the commodity currencies, the Australian, Canadian, and New Zealand Dollars, are struggling, failing to confirm the move, suggesting that today’s price action may not be so valid; or that the outperformance by the safe havens outside of the US Dollar suggests that the tensions over the fiscal cliff/slope may be worth respecting, and a bumpier road may be ahead. We’ll be exploring the role of the other safe havens throughout this month. 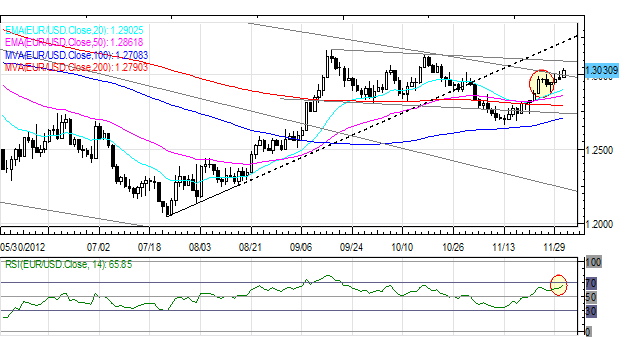 EUR/USD: The EUR/USD closed November near its monthly high and has started December out on a positive note, which portends to further gains given seasonal tendencies. For now, however, we remain neutral, if not close to shifting to bullish for the near-term, as the daily RSI nears overbought territory ahead of a run at 2H’12 highs. Accordingly, I continue to await resolution of 1.3010/20 to the upside (breaking today) and 1.2800/40 to the downside. Below, support comes in at 1.2740/45. Above, resistance is 1.3140/45 and 1.3170/75. 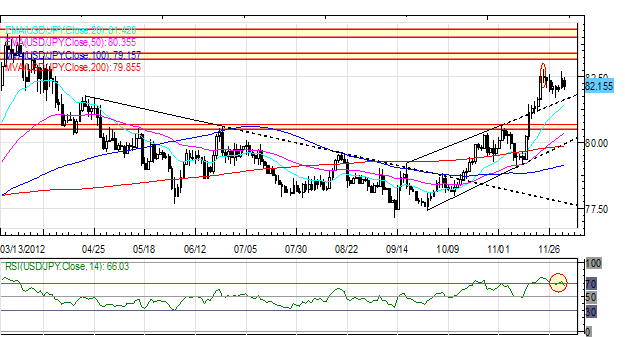 USD/JPY: A Bearish Engulfing bar is forming today, as failure at recent highs on Friday has led to a small pullback. As noted on Friday,“Signs of progress on the US fiscal cliff/slope will remove credit risk from the USD-side of the pair, which is bullish for the USD/JPY, while continued political tensions in Japan and threats of unlimited Bank of Japan easing have heightened both central bank risk and political risk to the JPY-side of the pair, which is bullish for the USD/JPY.”With US policymakers issuing partisan commentary by the end of the week, the fundamental impetus to move higher was somewhat diminishing. Support comes in at 81.75, 81.15, and 80.50/70 (former November high).Resistance is 82.90/83.00 and 83.30/55. 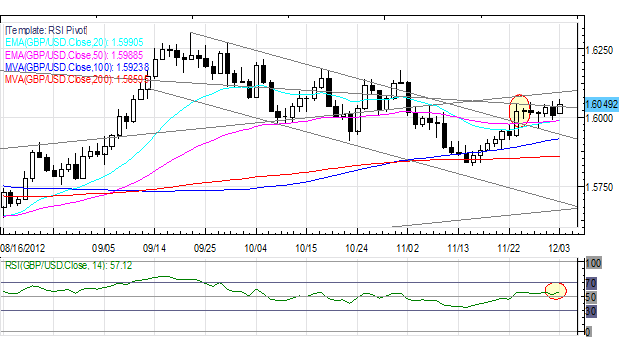 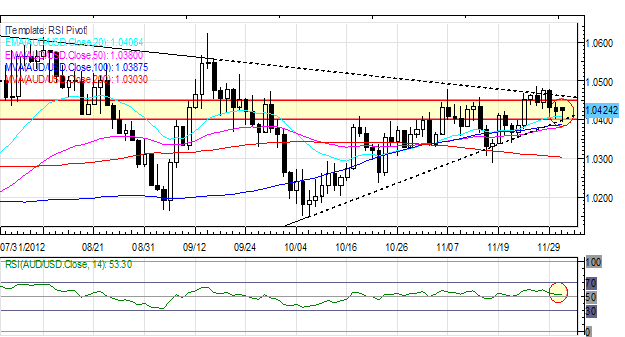 AUD/USD: No change from Wednesday: “As the pair has traded towards its Symmetrical Triangle termination point, and appears to be making a move to the upside; when considered in the big picture, the current pause witnessed the past year or so may be viewed as a consolidation. Support is at 1.0370/1.0405 (trendline support off of the June 1 and October 23 lows) and 1.0235/80. Resistance is 1.0475/80 (November high) and 1.0500/15.” 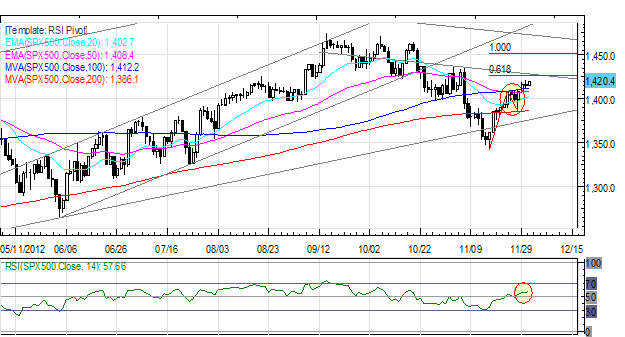 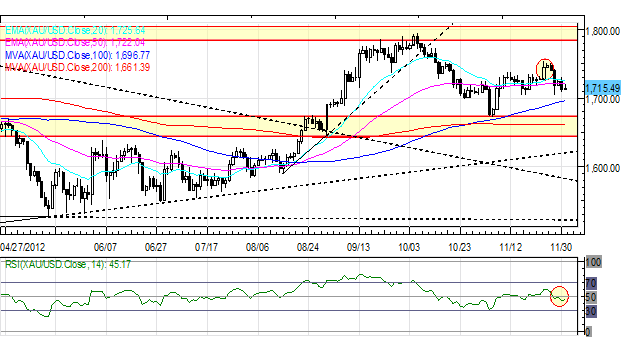