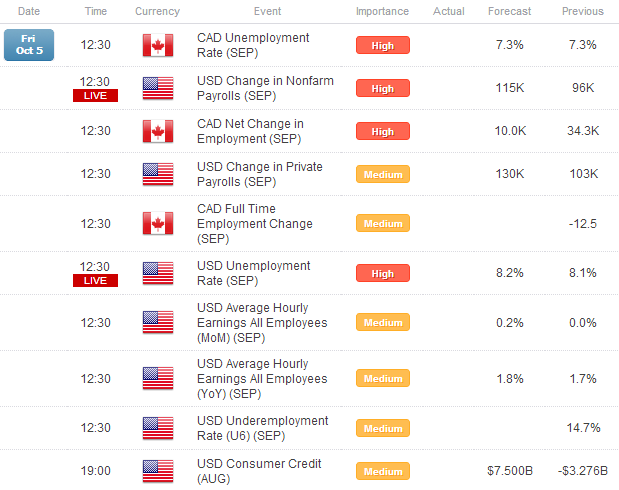 Aussie and Kiwi Lead, Yen Stable on BoJ; US Dollar Steady Ahead of NFPs

How similar the market looks today at this time as it did when this piece was written yesterday. As noted yesterday, “Price action has been mostly mixed on Thursday though trading in the pre-North American hours has resulted in a modest push upwards by high beta currencies and risk-correlated assets.” The only difference this time is that the European currencies are lagging, as the optimism for the move higher has not been European-centric but rather Asian-centric.

Curiously, there’s been little by way of data or central bank action that would suggest high beta currencies and risk-correlated assets should move higher: the Bank of Japan held its stimulus package at ¥55 trillion last night (as suggested in the Real Time News feed, the BoJ was not expected to change its program); and Australian construction data for September showed a drop in activity. It is thus possible that the rebound we’ve seen in the leading Australian and New Zealand Dollars could just be an unwinding of the negative sentiment that has dominated the market in recent weeks (re: China). Coupled with both majors sitting at crucial support levels, it has only take a little nudge to push them higher.

Overall, the markets are relatively calm ahead of the US cash equity open, with the Japanese Yen and US Dollar nearly even on the day, as market participants await the September labor market reading for the US. The Nonfarm Payrolls report due today is not drawing the same attention that previous reports have (for economic and political purposes: will the Federal Reserve ease more? Will NFPs influence the Presidential election?), though given the volatility that this report has generated in the past, we’re not discounting what could be the biggest market moving event of the week.

The economic docket is supersaturated today, with key labor market readings from Canada and the United States scheduled to be released at 08:30 EDT / 12:30 GMT. First, the Canadian data: the CAD Net Change in Employment (SEP) was +10.0K in September, from +34.3K in August, which should keep the CAD Unemployment Rate (SEP) on hold at 7.3%. In terms of the US data: the USD Unemployment Rate (SEP) is expected to have ticked higher to 8.2% as jobs growth, as evidenced by the USD Change in Nonfarm Payrolls (SEP) report, is not strong enough to keep up with population growth and the rate of entrants to the labor market (even though the participation rate remains at or near all-time or multidecade lows for a number of key demographics, including middle-aged working class men). NFPs are expected to print +115K from +96K in August, which would come in above the trailing four-month average of +92.3K.

Later on in the day, close to the US cash equity close, the USD Consumer Credit (AUG) report is due, and should show that credit growth rebounded – which comes as no surprise given the seasonal influence of young adults returning to secondary educational institutions and new entrants to the labor market trying to make ends meet. Moreover, considering that wages adjusted for inflation have been steadily falling for the past several quarters, as a consumption-based economy, the only way US economic growth can remain positive amid lower disposable income is for consumers to use credit (take on debt). 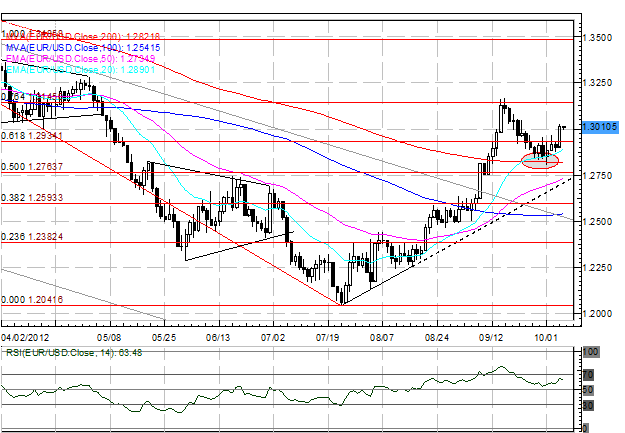 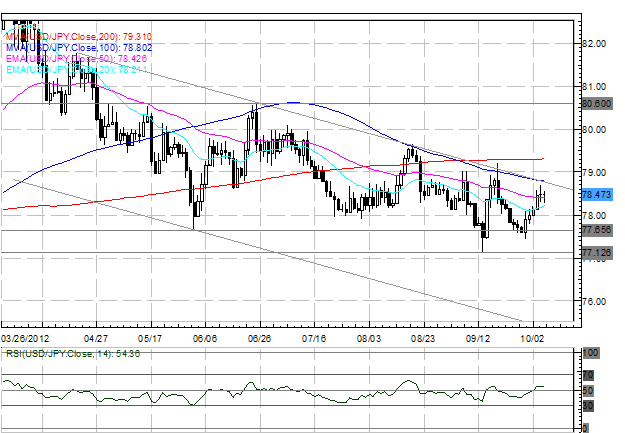 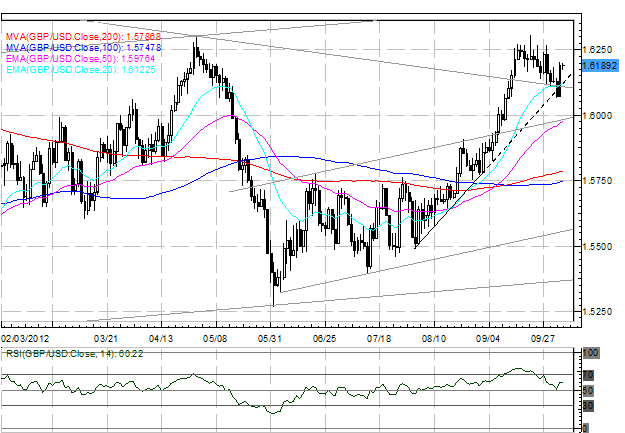 GBPUSD: The lack of follow through on the break from Wednesday led to a sharp rebound yesterday, with the GBPUSD closing back above major support at 1.6100/25 (20-EMA, descending trendline off of April 2011 and August 2011 highs, ascending trendline off of August 2 and August 31 lows). However, there’s been little progress today, so we think it is possible that there’s a healthy retest of the key support. A break below suggests a move to 1.5970/75 (former channel resistance off of June 20 and August 23 highs), and 1.5770/85 (late-August swing lows. Resistance comes in at 1.6260 (the former April swing highs by close) and 1.6300 /10 (September high). 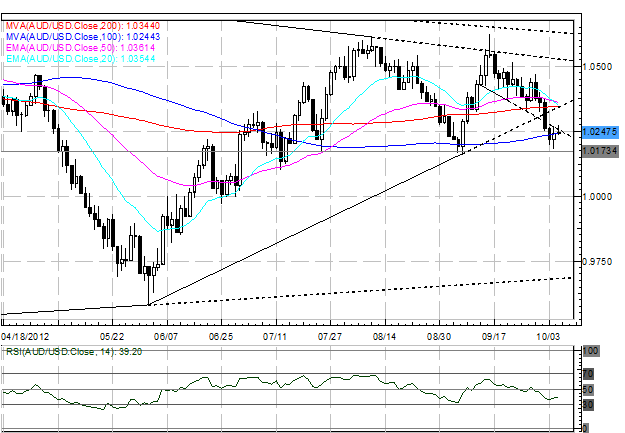 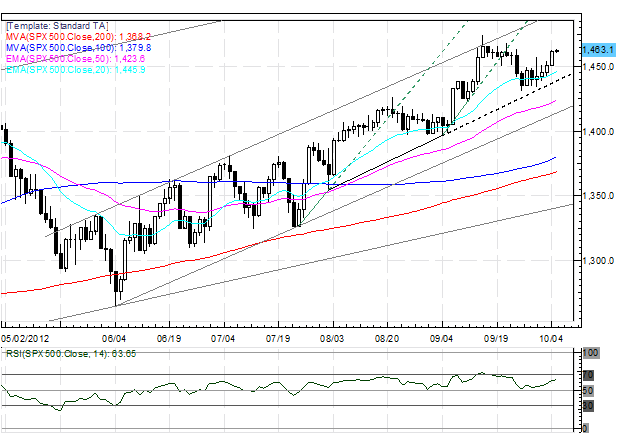 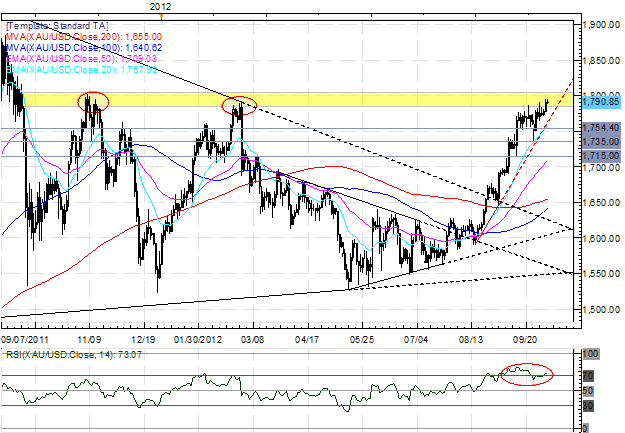 GOLD: Gold is hovering in the crucial 1785/1805 resistance zone, and today’s NFPs could result in the break or the pullback to support. It is important to consider that the sharp ascending trendline off of the August 15 and August 31 lows has held, now reinforced by the 20-EMA at 1755/60, also former intraday swing lows throughout mid-September. If this resistance breaks, a move to 1840 shouldn’t be ruled out. Another failure at 1785/1805 would likely result in a pullback to 1750/55.