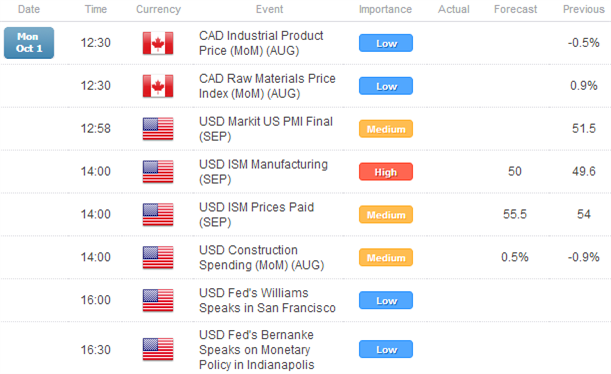 Beginning of October and 4Q Proves Bullish for Euro, Bearish for Pound

September 2012 was not your typical September, neither in recent terms nor in historical terms. Whereas September 2011 produced losses of -7.2% for the S&P 500 (the five-year average -0.1%), September 2012 proved more resilient, gaining +2.4% in the index’s first winning ninth month since 2010. This sets up for an intriguing October: last October, the S&P 500 gained +10.8%; and in 2010, the last time there was a positive September, the S&P 500 gained +3.7%. If October is truly setting itself up to be a strong month for high beta currencies and risk-correlated assets, it will need to overcome its five-year average of losses of -0.6%.

Whatever influences these seasonal figures may have on FX markets will of course be seen over the next few weeks, but the impact has been less than inspiring today. In what has been a volatile and mixed session, the US Dollar has traded slightly higher overall, but remains in the middle of the pack, as the Euro leads to the upside following some better than expected PMI Manufacturing data for September. On the flipside, after weak British and Chinese PMI Manufacturing data, the Australian Dollar and the British Pound are trailing to the downside.

The coming week is incredibly important for risk trends, with the Reserve Bank of Australia (a referendum on Chinese growth concerns) and the European Central Bank (a referendum on the Euro-zone sovereign debt crisis) set to meet on Tuesday and Thursday, respectively. We believe, as outlined in this week’s Top 5 Key Events (to be released at 14:00 EDT / 18:00 GMT today), that the fundamental picture is shaping up to support a bullish move in high beta currencies and risk-correlated assets.

The economic docket isn’t exactly stuffed today, though it is saturated with a few important data points that are likely to stoke volatility in USD-based pairs. At 08:58 EDT / 12:58 GMT, the USD Markit US PMI Final (SEP) reading is due, which should show signs of slight growth. At 10:00 EDT / 14:00 GMT, the USD ISM Manufacturing (SEP) report will be released, which is forecasted to show there was no change in manufacturing activity last month. As the USD ISM Price Paid (SEP) report will show, however, prices continue to rise despite the stagnation in growth. Also due after the US cash equity open is the USD Construction Spending (AUG) reading, due to show a rebound but not enough to overcome July’s losses. Midway through the US trading session and shortly after the European close, Federal Reserve Chairman Ben Bernanke speaks on monetary policy in Indianapolis, Indiana at 12:30 EDT / 16:30 GMT. 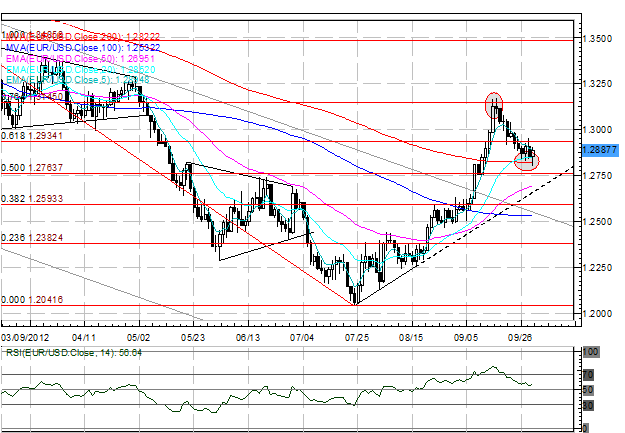 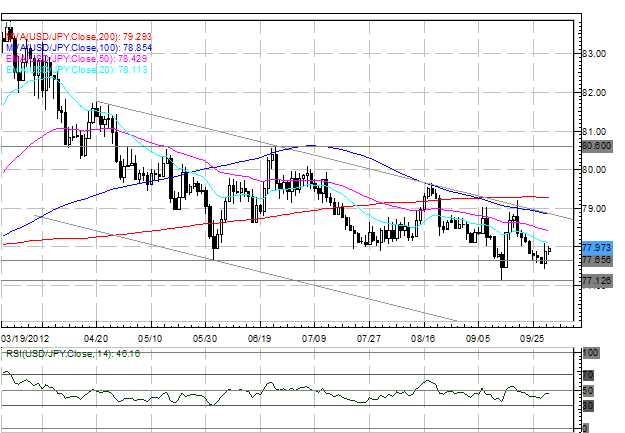 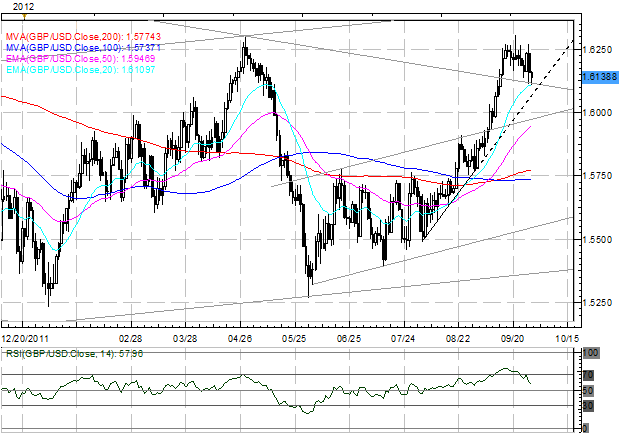 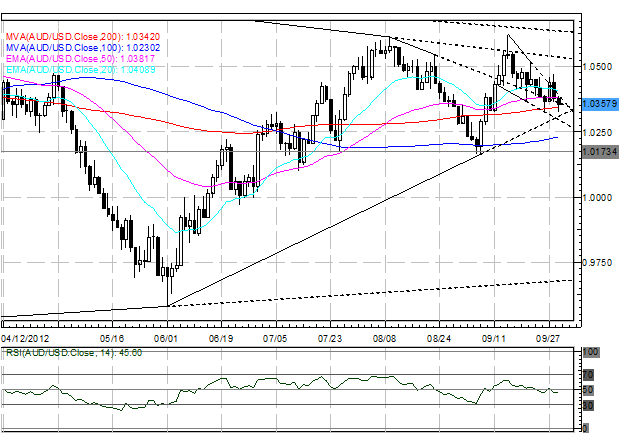 AUDUSD: Further declines today although a sharp rebound off of last week’s low as resulted in the beginning stages of a Hammer on the daily chart. Intraday resistance came at topside resistance in the Falling Wedge – a reversal pattern – first noted last week. Although the pattern was initiated, it may have been a false breakout; we will have resolution in the next few days. Resistance comes in at 1.0370 (Falling Wedge breakout level), 1.0405/25 (20-EMA, mid-August swing lows), 1.0470/85 (former intraday swing levels). Support comes in at 1.0325/45 (last week’ and daily lows, 200-DMA), 1.0305/15 (ascending trendline off of June 1 and September 6 lows), and 1.0270/80 (former intraday swing levels).