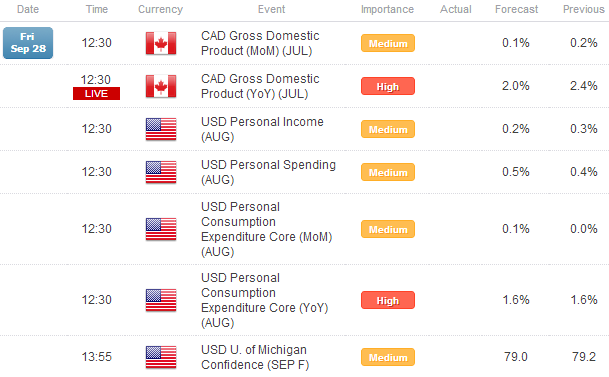 As we saw with the quad witching last Friday, end of period book rebalancing can throw markets off their normal course and produce some rather interesting price action. Today is no different, with the final day of September and the third quarter upon us. As such, the major currencies that typically trade with one another – the British Pound and the Euro, the Australian and New Zealand Dollars – have diverged slightly against the US Dollar as investors reshuffle their holdings; today’s price action may not be an accurate gauge of attitudes towards the market (just because prices have diverged doesn’t mean that historical correlations don’t remain important).

Although the US Dollar is slightly stronger today, we must respect yesterday’s price action as an insight as to what the market is expecting from Europe. Yesterday, the Spanish government announced its 2013 budget with the introduction of 43 news laws, a new independent fiscal authority, and sweeping spending cuts to try and reign in the deficit. But the big news isn’t that the public pension fund is being raided to help cover the deficit; instead, it is what pan-European authorities will do.

At the press conference, the Spanish Deputy Prime Minister explicitly expressed that the budget measures proposed went well-beyond the scope of leaders in Brussels and Luxembourg. Why does this matter? For Spain to take part in the European Central Bank’s bond-buying program, the OMTs, it would have to agree to reforms onset by foreigners. If the Spanish government made budget cuts beyond what would be expected by the European Troika, we can draw two conclusions: the Spanish government is preparing for a bailout; and it is trying to save face to make it look like outsiders aren’t influencing domestic politics. Rumors have been floating that Spain will ask for a sovereign bailout around October 4, so as to ensure that it can access the OMTs. Coupled with the aforementioned budget cuts, one can’t help but look to the European Stability Mechanism (ESM) coming online on October 8 as the next big milestone for the debt crisis.

The week finishes with several pieces of important data, all coming within the hour before or after the US cash equity open. At 08:30 EDT / 12:30 GMT, the CAD Gross Domestic Product (JUL) will be released, and only modest growth is forecasted; though with the growth rates well-above her American and European counterparts, the Canadian economy looks well off.

Also due then are the USD Personal Income (AUG) and USD Personal Spending (AUG) figures, which necessarily suggest (given the negative divergence between income and spending) that American consumers are taking on more debt to finance their expenditures. This isn’t a surprise given the fact that wages adjusted for inflation have been falling (reducing purchasing power), although if it continues for a prolonged period of time, a new credit bubble could be forming. One of the key gauges the Federal Reserve watches for inflation – the USD Personal Consumption Expenditure Core (AUG) – will also be released today.

Rounding out the key data for the day is final USD U. of Michigan Confidence (SEP F) report, which is due to show a slight downward revision. The initial September reading showed that confidence soared to its highest reading since May, but had since pulled back on renewed concerns over the labor market. 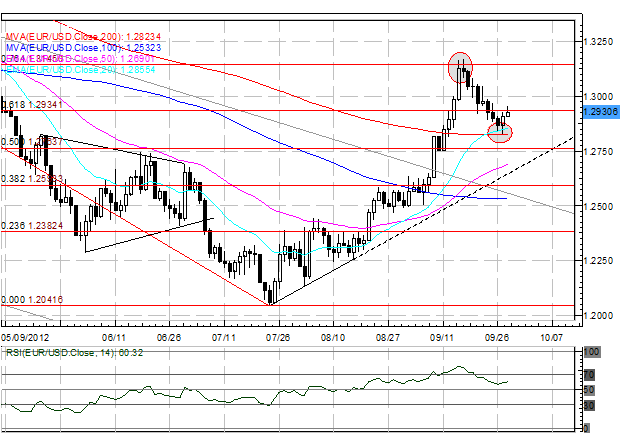 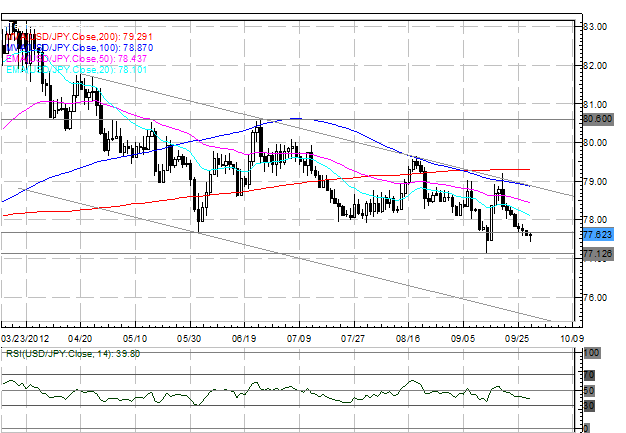 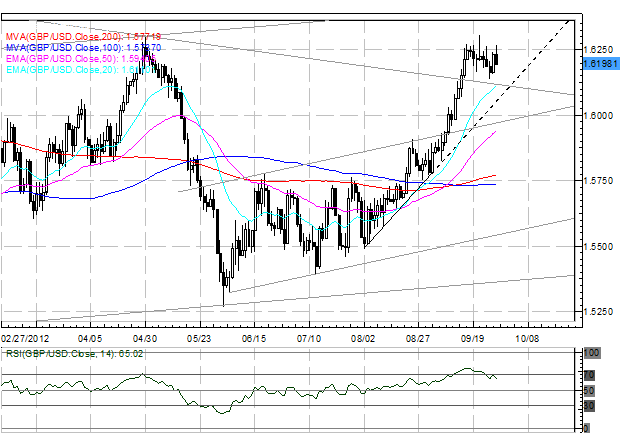 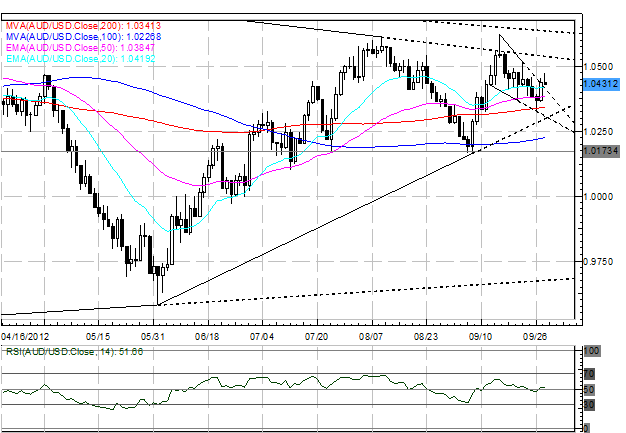 AUDUSD: The Falling Wedge – a reversal pattern – off the September 14 high broke to the upside yesterday, triggering a run up to the 1.0470s before the pair has pulled back today. With the pattern now initiated, a test of the September highs comes into focus early next week. Near-term resistance comes in at 1.0470/85 (daily high, former intraday swing levels). Interim support comes in at 1.0415/25 (20-EMA, mid-August swing lows, Falling Wedge breakout level), 1.0370/85 (descending trendline off of the August 9 and August 23 highs, 50-EMA), and 1.0325/40.