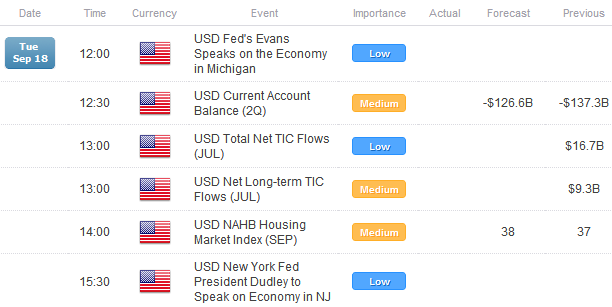 Risk-aversion is afoot this morning with the three major safe havens – the Japanese Yen, the Swiss Franc, and the US Dollar – leading the way higher against high beta and risk-correlated currencies – the Australian Dollar and the Euro. This is not something we see that often anymore: since the September 6, 2011 EURCHF floor implemented by the Swiss National Bank, the Euro and the Swiss Franc have held a +0.94 daily correlation (i.e. if EURUSD appreciates then USDCHF depreciates).

As we’ve been stressing since the European Central Bank’s decision to unveil an unlimited sterilized bond-buying program on September 6, 2012 (ironic that two major Euro-zone milestones took place exactly one-year apart, but that’s neither here nor there), the conditions that come along with the debt monetization scheme are unpalatable for Italy and Spain. Soon after the ECB’s plan was unveiled, Italian Prime Minister Mario Draghi said "Italy would not accept conditions beyond those already agreed and which we are already respecting,” which leads us to believe that the ECB will not be supporting Italy. Good luck.

The Spanish situation is slightly different. After taking a €100 billion bailout for its heavily indebted banking sector – plagued by a housing crisis, not so different than the US housing crisis circa 2007 – it’s looking increasingly likely that Spain will need a sovereign bailout. Why? The situation is analogous to what happened with Ireland: the country nationalized its banks and took their bad loans on, and eventually, it was shut out of the funding markets. If Spain is to stay solvent, it cannot allow its banking crisis to proliferate; and the only way that happens is if Spain receives another capital injection. Lower bond yields will help, but this of course – as explicitly outlined by ECB President Mario Draghi – will only come with “the condition.” With no bailout in the works, yields are back up, and this game of back and forth will continue until market participants implicitly force Spain to take a bailout.

The docket is a bit more saturated today, with three releases due out that could impact volatility and intraday trends. At 08:30 EDT / 12:30 GMT, the USD Current Account Balance (2Q) will be released, and the narrowing deficit suggests this could be supportive of the US Dollar. At 09:00 EDT / 13:00 GMT, the USD Net Long-term TIC Flows (JUL) report is due, which details demand for USD-denominated assets like Treasuries. At 10:00 EDT / 14:00 GMT, the USD NAHB Housing Market Index (SEP) will be released, and is expected to show a slight uptick. 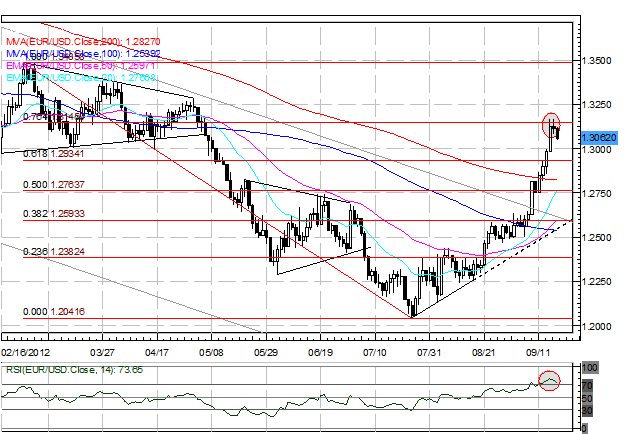 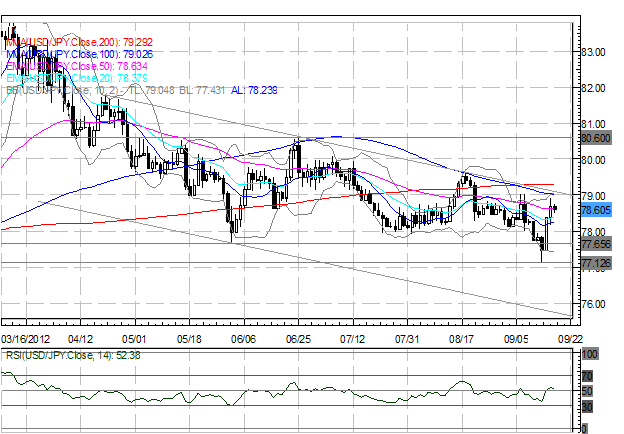 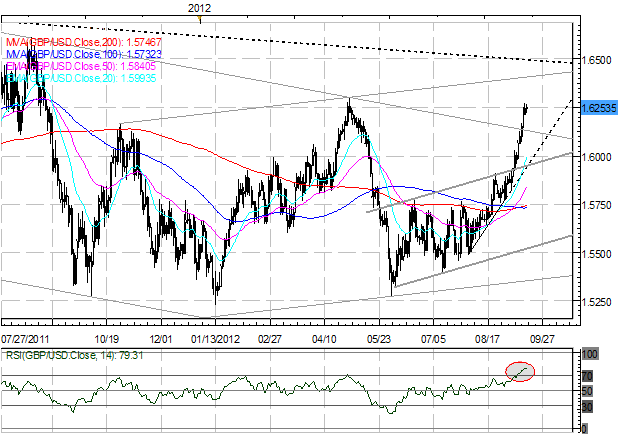 GBPUSD: Nothing has changed with the pair putting in an Inside Day; though we caution that an Inside Day alongside a significantly overbought daily RSI reading could signal a turning point. “The key 1.6120/40 level cracked with ease on Friday and our bias looks longer for the foreseeable future. The weekly close above said level opens the door for a move towards 1.6400 in the coming days. The former April swing highs at 1.6260 (by close), 1.6300 (by high) are in focus, now that the descending trendline off of the April 2011 and August 2011 highs broke last week. Below 1.5930/40, near-term support comes in at 1.5860/75 (ascending trendline off of August 2 and August 31 lows), 1.5770/85 (late-August swing lows), and 1.5700.” 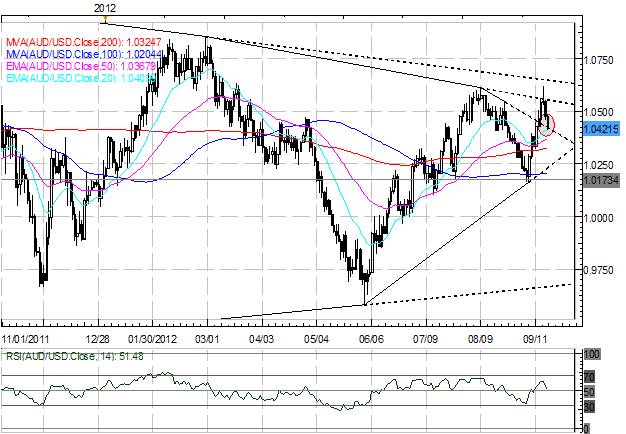