After Friday’s fall, the US Dollar has steadied nicely and retraced around half of its losses. Yesterday’s gains have been consolidated today, with the world’s reserve currency selling off in early-Asia before a return of demand for safety in early-European trade. Whereas the Australian Dollar and the Euro each were boosted by commentary from officials earlier, all the gains have evaporated now that US funds are preparing to return to the market.

Taking a look at the Reserve Bank of Australia Rate Decision last night for a moment, we find it shocking that Governor Glenn Stevens continues to claim that current policy is “appropriate” in the light of a rapidly slowing China. We liken his hubris towards that of European Central Bank President Jean-Claude Trichet last summer, when the ECB actually raised rates in July as the debt crisis started to accelerate out of control. Accordingly, with at least another month until the next RBA decision, the Australian economy looks poised for further downside given its exposure to China.

However, we offer a note of caution: history tends to repeat itself, and if not, it at least rhymes. Consider this: despite the recent downturn in Chinese data, the RBA kept rates on hold last night ahead of the second quarter GDP figure (due on Wednesday) and the August labor market report (due on Thursday). The last time the RBA meeting and these data coincided was back in June – and a surprise RBA hold gave way to significantly stronger growth and labor market figures released in the ensuing days. With this fresh on our mind, we are extremely cautious towards the Australian Dollar ahead of these releases.

There are a few important data due out this morning, all out of the United States. At 08:58 EDT / 12:58 GMT, the USD Markit US PMI Final for August is due, and is expected to show slight expansion. At 10:00 EDT / 14:00 GMT, the USD ISM Manufacturing and Prices Paid reports are due, with the former moving back to neutral and the latter showing contraction albeit it at a slower pace than in the month prior. Also due then is the USD Construction Spending report for July, expected at +0.4%. 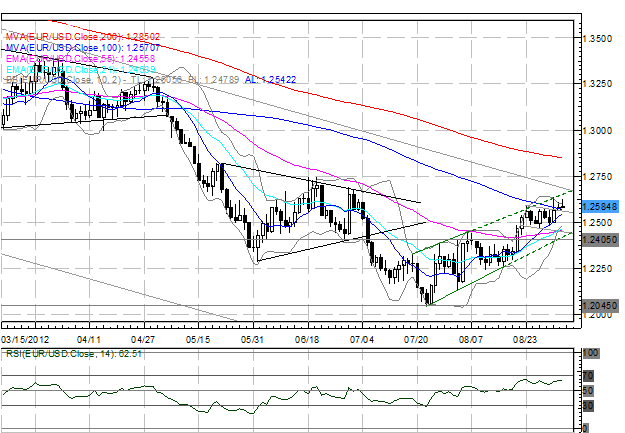 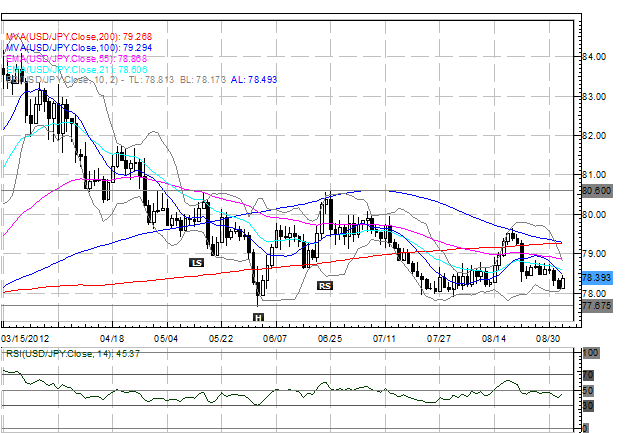 USDJPY: The USDJPY closed below the key 78.60 level yesterday for the second consecutive day, exposing former swing lows near 78.10/20, as expected. This level coincides with former June swing lows and a level of resistance for most of July (note the daily wicks above said level but no closes). For now, this is the most important level: potential exists for a rally back into 79.10/20 as long as 78.60 holds, whereas a daily close below suggests a move towards 78.10/20 at the minimum. Penetration of the August low at 77.90 will likely result in a washout to new lows with the potential for 77.65/70 and 77.30. 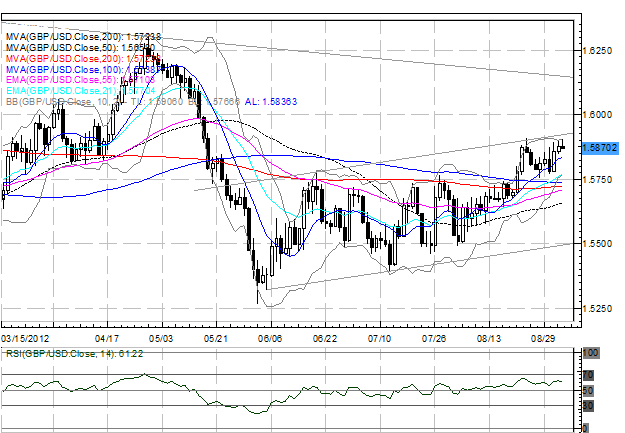 GBPUSD: The GBPUSD continues to push higher towards topside channel resistance, as expected. We do believe, however, that this is the “final push higher before the next leg lower.” Key levels for the near-term are 1.5880/1.5900 to the upside and 1.5770/90 to the downside; we are continuing to become overextended on shorter-term charts, suggesting that another failure at 1.5900 could lead to profit taking before further bullish price action. A daily close below 1.5770/90 over the coming days should lead to a drop into 1.5700/20. Beyond that, support comes in at 1.5635/40 (last week’s low), and 1.5625 (ascending trendline support off of August 6 and August 10 lows). A daily close above 1.5900 points towards 1.5985. 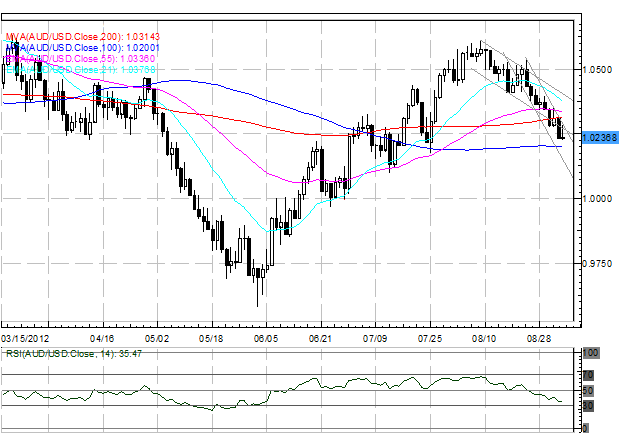