US Dollar Fights Back to Broken Support; Morning Star Forming on Daily?

Risk-aversion is afoot this morning with the US Dollar pacing the gainers, just behind the resilient Canadian Dollar. The world’s reserve currency has been finding a base following Wednesday’s precipitous sell-off predicated on a more dovish than expected Federal Reserve (one which we are choosing to ignore given the comments from James Bullard, the St. Louis Federal Reserve President, which suggested that the data on which the Minutes were based on were “stale”). The Dow Jones FXCM Dollar Index (Ticker: USDOLLAR) is working on a short-term reversal pattern on the daily chart, a Morning Star candle cluster, as the US Dollar fights back to channel support. A close back above channel support (ideally, >10000) would suggest a rebound is in order to end the month.

Mainly, we point to commentary out of Europe that is driving price action today. First and foremost, the European Central Bank has reportedly said, according to Bloomberg News, that any major bond-buying programs are on hold until the German Constitutional Court rules on the legality of the European Stability Mechanism (ESM), the region’s main bailout fund (it will replace the European Financial Stability Facility in the long-run). With no ruling expected until mid-September at the earliest, we think that a further erosion of economic data, which is likely, could put pressure on Italian and Spanish bond yields (which may be materializing today).

Also influencing price action has been the meeting and ensuing press conference between German Chancellor Angela Merkel and Greek Prime Minister Antonis Samaras. It’s every evident that relations are eroding quickly between the core and the periphery: Greek PM Samaras has asked for an additional two-years for Greece to meet its obligations, while both French and German leaders have said that current commitments must be stuck to.

The docket is thin again to end the week, but there is one event on the docket that is likely to stir volatility ahead of the European session close. At 08:30 EDT / 12:30 GMT, the USD Durable Goods Orders report for July will be released, and it is likely to show a further strengthening of the US economy. Durable goods are a good proxy for both sentiment and spending trends, as by definition, durable goods have life spans of three-years or greater; accordingly, a rise in orders suggests that consumers are more certain about future income and employment prospects. 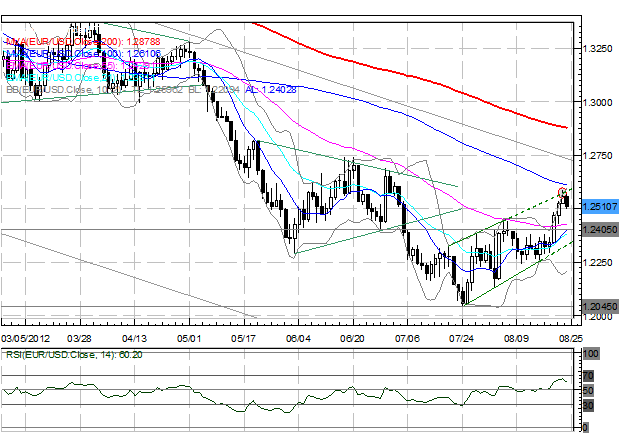 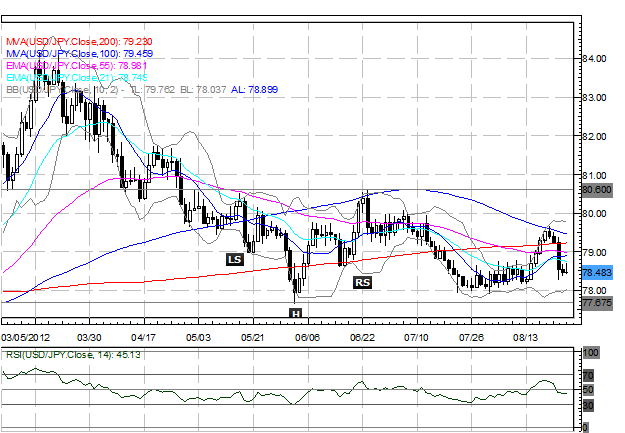 USDJPY: The USDJPY is right back where it was last week, slightly lower than expected, given the short-term technical congestion that materialized near the 100-DMA on Tuesday. Nevertheless, the key level today is 78.60, former June swing lows and a level of resistance during most of July. A weekly close below 78.60 today puts 78.10/20 (former lows) in focus. A weekly close above said level gives scope towards 79.10/20. 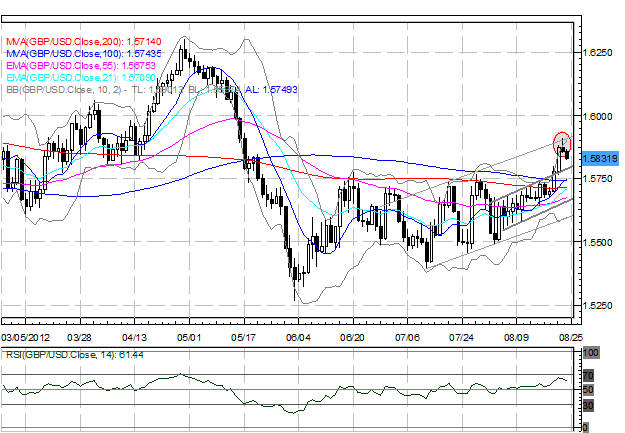 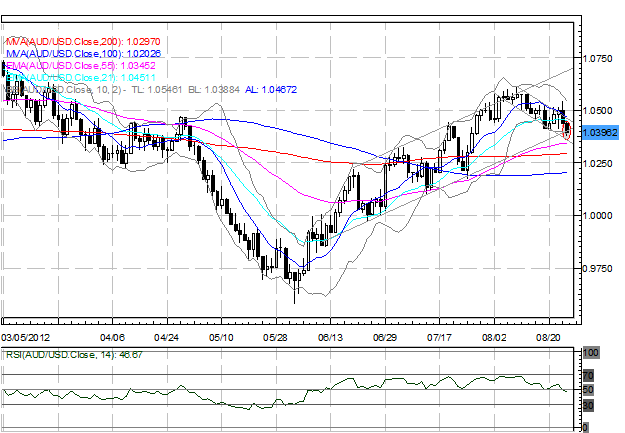