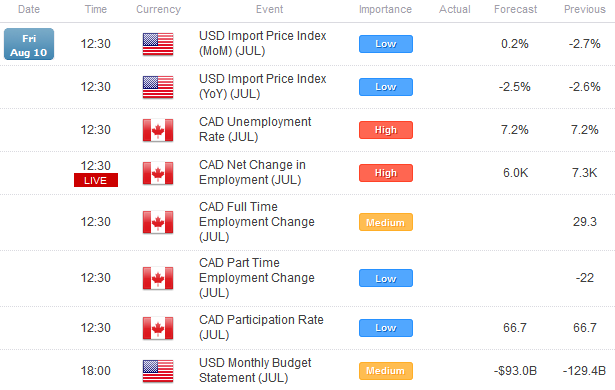 US Dollar Technically Constructive in Near-term - Is a Reversal Underway?

The Japanese Yen has emerged as the top performer in a broad risk-off trading environment to end the first full week of August. The Australian Dollar trails as trade data out of China suggests that export growth is crumbling, a foreboding sign for global growth prospects. Accordingly, expectations for a reserve requirement ratio (RRR) cut by the People’s Bank of China are riding high, which should help stimulate the economy some six-months down the road (typically, rate cuts take around half of one year to cycle into the real economy).

Meanwhile, the Euro’s troubles have continued with a further deterioration against the US Dollar today, on the back of discouraging German data as well as rising bond yields in Italy and Spain. German inflation cooled unexpectedly last month, and at +1.7% year-over-year, it is at its slowest pace since December 2012. Stripping the energy component from the equation, consumer price pressures are a paltry +1.4%. Usually a leading indicator, falling price pressures necessarily suggest a slowing German economy.

Accordingly, with global growth concerns mounting again, and no new accommodative measures definitively on the horizon (though it is looking increasingly likely we will see new stimuli from the European Central Bank and the People’s Bank of China in the near-term, and from the Federal Reserve a few months out), the Dow Jones FXCM Dollar Index (Ticker: USDOLLAR) appears to be carving out a bottom. On shorter-term charts (hourly, 4-hour), we note that a Rounding Bottom is developing; and given the positive fundamental developments last week (the Federal Reserve holding back on more stimulus and July’s Nonfarm Payrolls report showing the labor market is adding jobs faster than anticipated), we believe the US Dollar is both fundamental and technically constructive in the short-term.

The economic docket is fairly thin to end the week, with only three pieces of data due to be released in the North American session that could have any influence on price action. At 08:30 EDT / 12:30 GMT, the Canadian labor market reading for July is due. The CAD Net Change in Employment (JUL) is expected to have shown that the Canadian economy added +6.0K jobs, after adding +7.3K in June. Similarly, the CAD Unemployment Rate (JUL) will remain on hold at 7.2%. At 14:00 EDT / 18:00 GMT, the USD Monthly Budget Statement (JUL) is due, and is expected to show a smaller deficit. 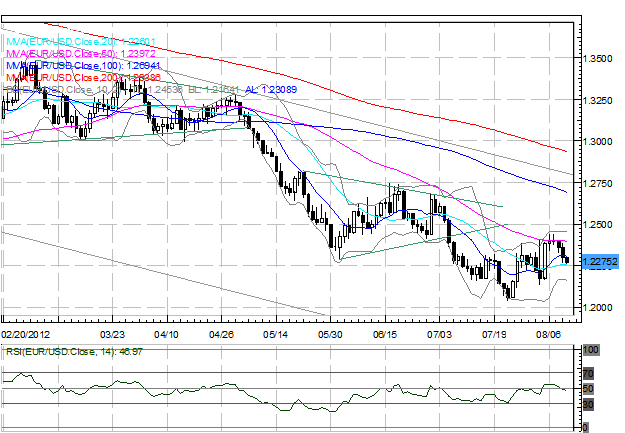 EURUSD: The EURUSD continues to creep lower, as anticipated, given the lack of a fundamental catalyst to suggest that further gains are likely (this being the announcement or update on progress of a major bond buying program; or the Federal Reserve suggesting a third round of quantitative easing is closer). A break of 1.2310/30 today suggests the next level lower of buying interest isn’t until 1.2200/20 (former swing levels, ascending trendline off of July 24 and August 2 lows). Nevertheless, there remains scope for a bullish outcome, for the time being. The recent failure above 1.2400 is critical, considering the potential for an Inverse Head & Shoulders off the bottom. With the Head at 1.2040/45 and the Neckline at 1.2400/05, the measured move for this potential reversal would be 1.2760. We will respect this on a daily close above 1.2400/05. A break of 1.2200/20 takes this formation off the table temporarily. Near-term resistance comes in at 1.2310/30, 1.2400/05, and 1.2440/45. Daily support comes in at 1.2200/20 and 1.2155/70. 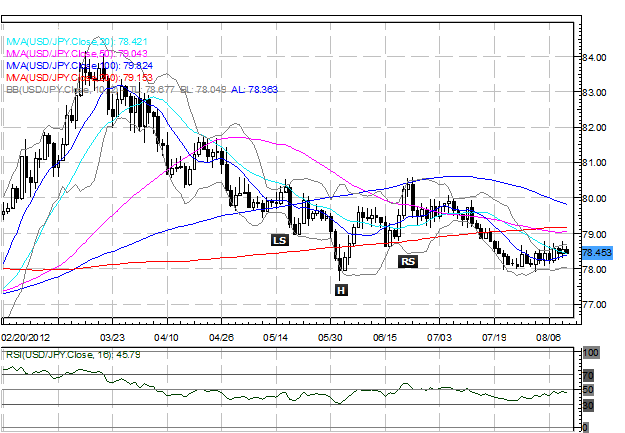 USDJPY: A pattern long in the making, the USDJPY Inverse Head & Shoulder formation that has been in wait-and-see mode remains valid so long as the Head at 77.60/70 holds. Indeed, it has, and after the Fed meeting and the July Nonfarm Payrolls last week, the USDJPY is constructive in the neat-term, fundamentally. Accordingly, with the Head at 77.60/70, this suggests a measured move towards 83.60/70 once initiated. Near-term resistance comes in at 79.15/20 (200-DMA). Price action to remain range bound as long as advances are capped by 80.60/70. On the hourly charts, it appears a Rounded Bottom is forming (yesterday was the highest exchange rate since July 20), and we are thus biased higher for now. 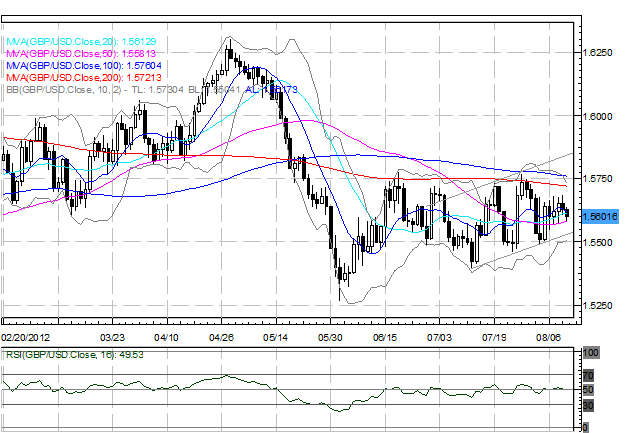 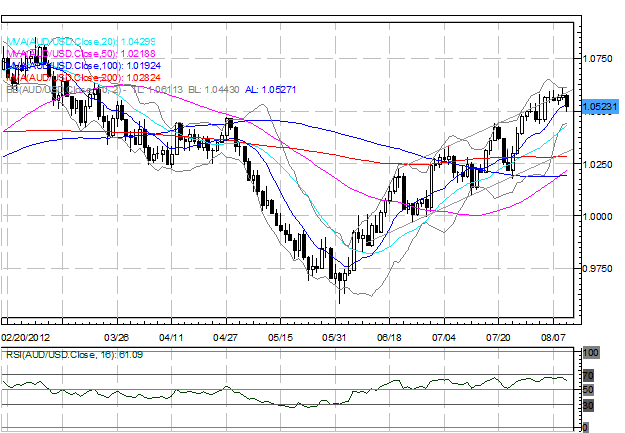