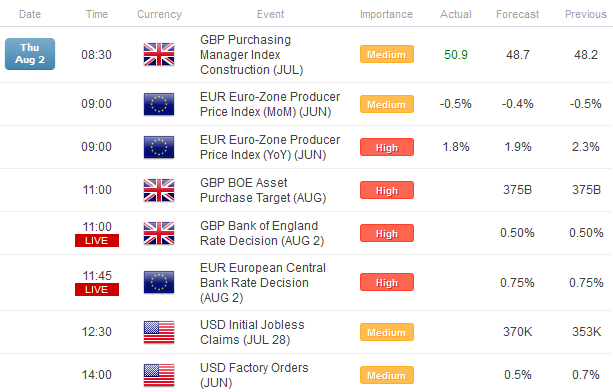 Euro Advance Limited Ahead of ECB; British Pound Trails Ahead of BoE

Despite the Federal Reserve’s indecision yesterday, the US Dollar has pared back its gains post-FOMC. Now, with the Bank of England and the European Central Bank due up over the next few hours, the European currencies are making a push higher. Curiously enough, the British Pound is lagging gainers as it appears many are expecting the Bank of England to surprise market participants and announce another fiat currency diluting quantitative easing package. While this could stir some risk-appetite in the near-term, this should result in further Sterling weakness.

The docket is heavily saturated this morning, with two rate decisions due out ahead of the US cash equity open. At 07:00 EDT / 11:00 GMT, the Bank of England is set to announce its monetary policy for the weeks ahead; our focus lies in the Asset Purchase Target, which if expanded, could prompt a British Pound sell-off (given the dilutive effects of quantitative easing). At 07:45 EDT / 11:45 GMT, the European Central Bank will announce its monetary policy for the coming month.

After President Mario Draghi’s sharp rhetoric last Thursday, that the European Central Bank would do “whatever it takes” to “preserve the Euro…within [the European Central Bank’s] mandate,” there are high hopes for a major bond buying program to be announced today. Instead, we expect at most another rate cut (from 0.75% to 0.50%) alongside a third longer-term refinancing operation (LTRO), which will disappoint market participants, and prompt a Euro sell-off. If the European Central Bank does indeed meet expectations – which will be difficult given German opposition to a bond buying program – then the crisis has reached a turning point, in our opinion, and we would expect a significant rally in high beta currencies and risk-correlated assets, especially against the Japanese Yen and the US Dollar (we find this outcome unlikely). 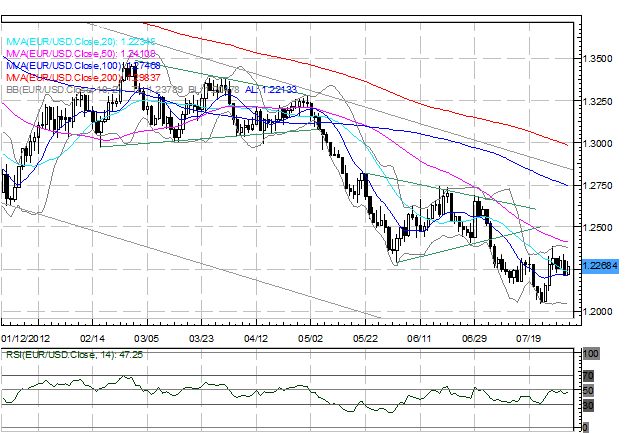 EURUSD: The EURUSD has faced downside pressure the past several days, setting a series of lower highs and lower lows since Friday’s failed run up to 1.2400. Accordingly, there are two ways to view this price action: a corrective Bull Flag, in which prices will break higher towards 1.2600; or a topping pattern which needs a fundamental catalyst to be pushed lower. We favor the latter. As the pair continues to trade with an RSI below 50 on the daily charts, we believe selling rallies going forward is the preferred course of action. Accordingly, given the tight price action relative to yesterday’s close, near-term resistance comes in at 1.2310/30 and 1.2375/90 (July high). Support comes in at 1.2220/45 (20-DMA), 1.2155/70, and 1.2110/20. We remain bearish as the pair has yet to complete its measured move from its May 1 decline, and over the coming six-weeks, we are looking for a sell-off into 1.1695-1.1875. 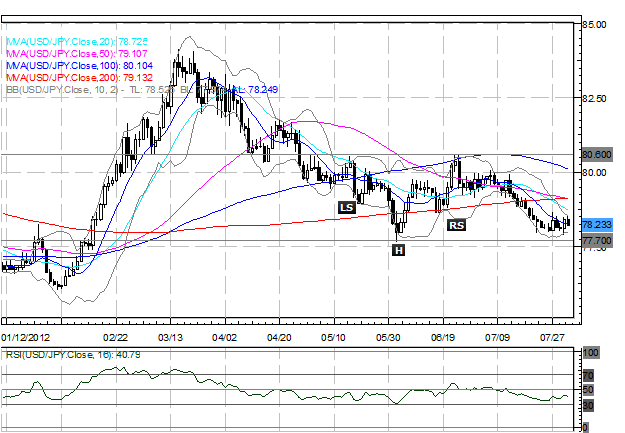 USDJPY: Is the USDJPY is working on an Inverted Head & Shoulders pattern off of the June 1 low? As long as the Head at 77.60/70 holds, the pattern remains technically valid. With the Head at 77.60/70, this suggests a measured move towards 83.60/70 once initiated. Near-term resistance comes in at 79.05/10 (200-DMA). Price action to remain range bound as long as advances are capped by 80.60/70. On the hourly charts, it appears a rounded bottom is forming, and we are thus biased higher for now. 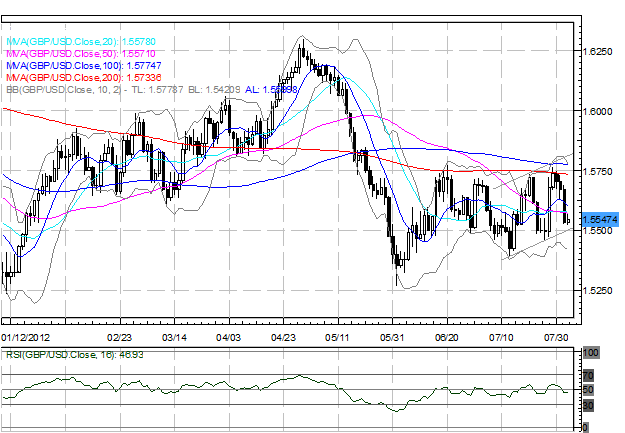 GBPUSD: The GBPUSD has sold off sharply the past few days, as expected, but remains within a slight ascending channel off of the July 12 and July 25 lows, suggesting that price action is expected to remain range bound to the upside in the near-term. However, if the Bank of England adds more liquidity to the market and the European Central Bank disappoints, the pair will easily break trendline support at 1.5500. A break of 1.5500 exposes the lows last week at 1.5455/60. Near-term resistance is 1.5570/80 (20-DMA, 50-DMA) then 1.5730/35 (200-DMA). 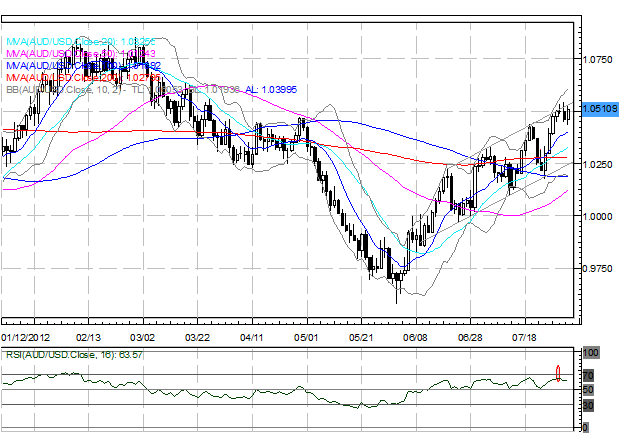