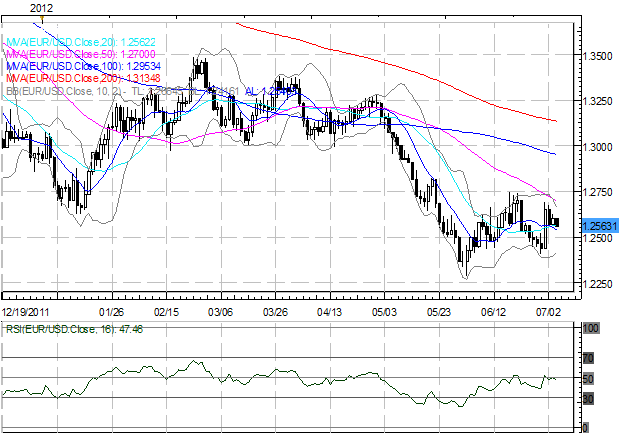 British Pound, Euro Continue to Weaken in Thin Trading Ahead of BoE, ECB

The European currencies remain weaker on the whole since Friday’s rally, as market participants have begun pricing in the influence that looser monetary policies employed by the Bank of England and the European Central Bank will have on the British Pound and the Euro, respectively. Despite the continued stream of poor data out of the United Kingdom and the efforts set forth by Euro-zone leaders last week, the Euro, not the British Pound, is the worst performing major currency since Friday.

In light of the national holiday in the United States, which has equity markets closed on Wednesday, there are no major data releases due out for the remainder of Wednesday’s trading session. There are some key events on the near-term horizon, however.

EURUSD: The EURUSD’s consolidation and failure to set fresh highs in the wake of the Euro-zone Summit play into the budding Symmetrical Triangle on the daily chart. For now, we are looking for a pullback towards 1.2480 before the direction of the triangle is determined. Resistance to the upside comes in at 1.2700/15 (Bollinger Band, 50-DMA), and a break above suggests a test of 1.2745/50 (June high) then 1.2820. Triangle support comes in at 1.2480, and a move lower points to 1.2405/20. 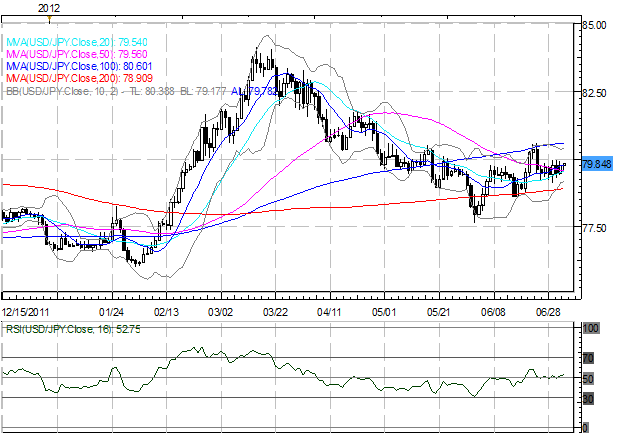 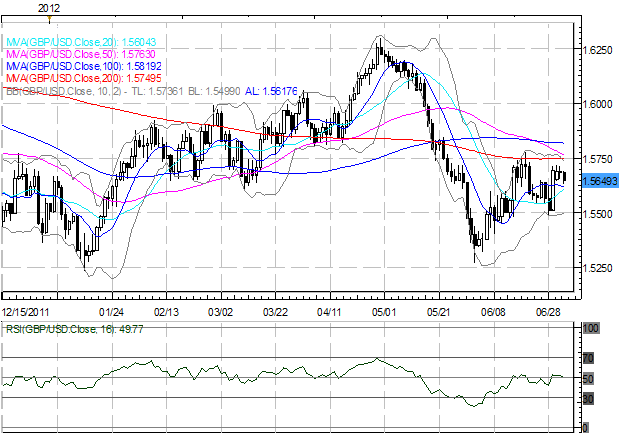 GBPUSD: The GBPUSD’s failure to achieve new highs in the post-Euro-zone Summit world draws into question the underlying strength of the Sterling, and the suggestion is that diverging monetary policies between the Bank of England and the Federal Reserve (with the Bank of England increasingly dovish and the Federal Reserve in wait-and-see mode) are hurting the pair. Fresh weekly lows were set today at 1.5630, suggesting further losses ahead. Resistance comes in at the weekly high at 1.5720/25 then confluence at 1.5735/40 (Bollinger Band) and 1.5750/65 (200-DMA, 50-DMA). Near-term support lies at 1.5600/05 (20-DMA) and 1.5580/85 (38.2% Fibo retracement on June 1 low to June 20 high move). 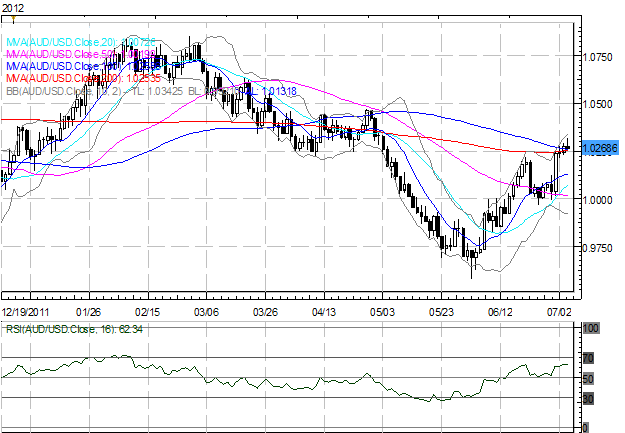 AUDUSD: The AUDUSD hit its highest level since May 3 today, but the pair has since pulled back towards its 100-DMA, which it posted its first daily close above yesterday since April 27. Two consecutive closes give scope for a move higher towards 1.0365/85. Near-term support comes in at 1.0250/60 (200-DMA, 100-DMA) and then the weekly low at 1.0210/15. A move below would signal an intraweek reversal and signal further losses.