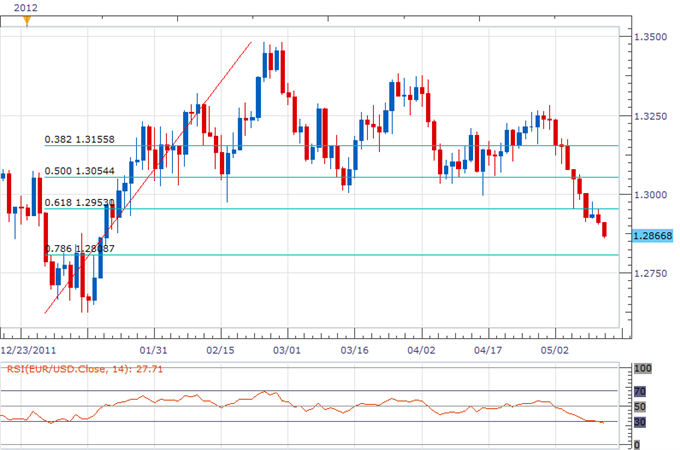 Failure for Greek lawmakers to form a coalition over the weekend leaves the markets in a risk off trade, and the Euro is looking to make fresh declines down towards next key support by 1.2800. Perhaps also potentially weighing on sentiment was the other weekend news, after China came out and announced yet another 50bp cut to the reserve requirement ratio. While we understand that there is reason to react positively to the news on the move for additional accommodation to help stimulate the economy, we also feel that the move underscores the severity of the slowdown in China and the potential impact it will have on correlated economies going forward.

Relative performance versus the USD Monday (as of 11:25GMT)

Overall, the economic calendar for Monday is rather light and we suspect that markets will continue to trade off of broader themes. Eurozone industrial production was however rather discouraging despite some upward revisions, and this continued to pressure the currency. Elsewhere, Aussie has finally broken back below parity, while Kiwi has extended declines and stands out as the gross underperformer on the back of weaker retail sales data. Aussie setbacks have been somewhat supported however by solid local housing finance data and upbeat comments from RBA Lowe. Oversold technicals are also helping to keep the market supported in the 0.9900’s. Moving on, any weakness in the Yen earlier in the day was wiped clean, with USD/JPY reversing course sharply to trade well back under 80.00. It seems that the intensity of the risk off trade has overwhelmed the Yen market with a fresh wave of bids.

EUR/USD: While our core bias remains bearish, at this point we see the probability for some form of a corrective bounce back above 1.3000 before the market is to begin its final descent towards the yearly lows at 1.2625. Daily studies are now oversold, while the market looks to approach next key support in the form of the 78.6% fib retracement of the yearly low-high move by 1.2810. However, any additional short-term setbacks should be limited from there and once this 78.6% fib retracement is tested, technical studies will advocate strongly for a necessary bounce. STRATEGY: BUY @1.2810 FOR A 1.3050 OBJECTIVE; STOP-LOSS 1.2690.