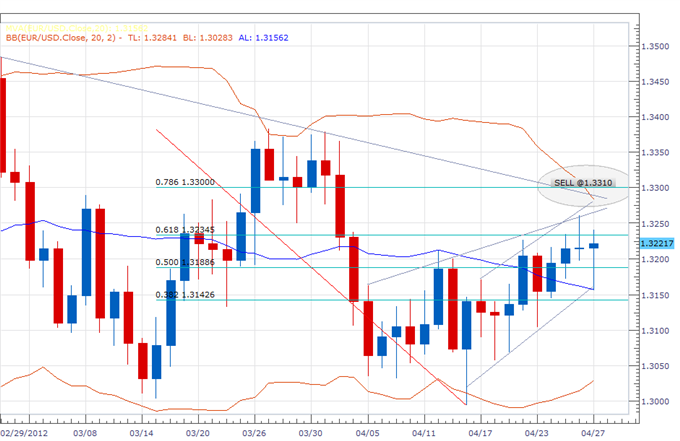 Well, it certainly didn’t take the markets long to shrug off the latest S&P Spain downgrade, downbeat comments from the Spanish PM and another batch of softer European data, with the Euro rallying from 1.3160 area European session lows, to trade all the way back above 1.3200. Overall, we would still recommend trading with extreme caution in these very tight but choppy, directionless markets. Despite the Euro pullback earlier today, the market still seems to be very well supported on dips (see hourly chart off 16April lows), and we would not rule out the possibility for a reversal back towards 1.3300.

Relative performance versus the USD Friday (as of 10:10GMT)

We are very bearish EUR/USD once 1.3300 is tested, but at current levels, we remain sidelined. Ultimately, it will be attitude towards risk that determines market direction. Any pick up in risk appetite will be Euro and currency positive (USD and potentially Yen negative), while added fear and uncertainty will likely weigh on the FX markets and benefit the US Dollar.

Elsewhere, the Yen was subjected to some highly choppy whipsaw trade after the Bank of Japan announced additional monetary easing measures. Although the BOJ left rates on hold as expected, the Yen was sold off after the asset purchase fund was raised by Y10 trillion (net Y5 trillion as Y5 trillion fixed rate operation was reduced), and the maturity of the purchasing JGBs was extended to 3 years.

However, any initial Yen weakness on the announcement was easily absorbed, with USD/JPY more than giving back its post event risk rally. The broader macro theme of risk off trade proved to be the more influential market mover and perhaps sent a message that government action can not have any lasting influence on currency direction.

This offers a good segue into the subject of Swiss intervention, and we would remind investors to not forget about the EUR/CHF cross rate, which has been unable to establish any upside momentum beyond 1.2000, despite firm warnings from the SNB that the 1.2000 floor will be aggressively defended. The recent Yen rally post BOJ moves can not be comforting to the SNB, and just might provide enough ammunition for Swiss longs to ramp up their efforts. While we are not necessarily calling a EUR/CHF 1.2000 break today, we also will be keeping a close eye.

Finally, the Pound was well bid in European trade and managed to surge to fresh 2012 highs against both the buck and Euro. Cable jumped above 1.6200, and EUR/GBP dropped to multi-month lows below 0.8140. Fundamentally, talk of a potential rate hike made the rounds and may have helped to drive the relative strength, but technically, Sterling is starting to look a little stretched, and from here, we see risks for a reversal against both the Greenback and Euro.

EUR/USD: Although the latest rally has been impressive, we contend the market is still locked within a more well defined medium to longer-term downtrend off of the 2008 record highs, and as such, looking to sell rallies in 2012 is the preferred strategy. The rally has now extended beyond 1.3200 and from here we see scope for additional upside towards 1.3300. However, once the 1.3300 level is tested, there is a very compelling technical argument to be made for a bearish resumption. A closer look at the 1.3300 level shows a confluence of resistance which includes the obvious psychological barrier itself, some falling trend-line resistance off of the February 2012 peak, the upper bollinger band, and a very attractive 78.6% fib retrace off of the most recent March-April, 1.34400-1.3000 high-low move. As such, we really like the idea of fading the strength to this area if it is tested today and will place our entry just over 1.3300. STRATEGY: SELL AT 1.3310 FOR AN OPEN OBJECTIVE; STOP-LOSS ONLY ON ANY DAILY CLOSE (5PM NY TIME) ABOVE 1.3410 (PREVIOUS LOWER TOP/MARCH PEAK). 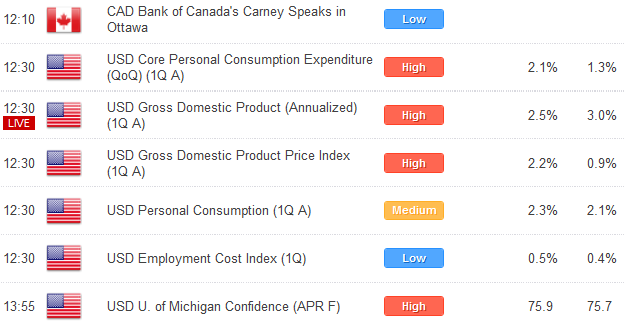