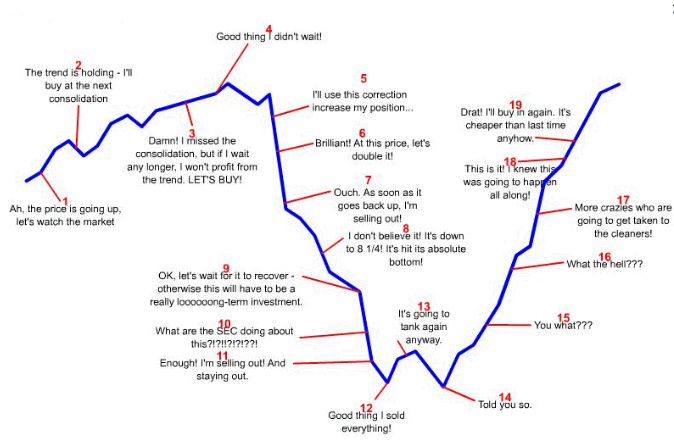 Euro Rallies Will Be Limited to 1.3300 Area; Sell Recommendation Issued

While we are not entirely surprised to see Kiwi find renewed bids on Thursday, in light of the broader currency strength in markets, we are taken with the outperformance in the commodity currency. The New Zealand Dollar is the strongest of the major currencies on the day, and this comes after the RBNZ left rates unchanged at 2.50% while also warning that the high Kiwi would lead to a reassessment of monetary policy. Yet, this statement from the central bank has not scared risk traders away, and the market has shot back above 0.8150. Still, we see the rally as corrective, and overall, our core bearish outlook for the NZD and currencies in general against the buck remains bearish.

Relative performance versus the USD Wednesday (as of 9:30GMT)

However, as we highlighted in yesterday’s commentary, the prospects for a legitimate reversal back in favor of the buck are still on hold. Despite underlying fundamentals which we feel should support additional USD bids (shift in Fed policy, ongoing Eurozone uncertainty, threat of slowdown in China and correlated economies), market price action seems to still want to push the US Dollar lower. Our in-house sentiment index continues to show retail traders adding to USD longs, with the ratio of long USD against the Canadian Dollar at over 7:1, short Cable at around 6:1, and short EUR/USD at over 2:1 (a lot for this market). Instead, we will wait until we see evidence of these ratios flattening out before dipping our toes back in the water.

It is usually at the moment when retail traders have finally given up that we find that a trend will often reverse in the direction that they had hoped for. We call this the “of course” moment, because at that moment, just after they have exited the position for a large loss, the market turns around and aggressively trades in the direction they had hoped for. The retail trader is left with nothing else to say buy “of course” …”now the trade finally goes my way.”

The strength in the Canadian Dollar is quite impressive, with USD/CAD dropping to back to levels not seen since September 2011. Meanwhile, the Pound has been just as prone to catching bids, with the currency easily shrugging off yesterday’s awful GDP reading to rally to its own multi-day highs against the buck. We therefore will happily defer entering the market for fresh USD longs until evidence shows a reduction of long USD retail positioning.

Moving on, indeed, the Fed has left policy on hold as was widely expected, while also committing to keep rates ultra accommodative until 2014. This language offers no new real insights into the central bank’s outlook, and we think that Mr. Bernanke and co. will be waiting for more confirmation of sustained economic recovery before adopting a more hawkish stance. We have already seen a bit of a shift in recent weeks, with the prospects of QE3 diminishing significantly, but more time to show solid economic data performance will be required to inspire the next move towards reaffirming the reversal of monetary policy.

Tuesday and Wednesday’s recovery in global equity markets has also helped to inspire the currency bids and risk on trade, but here too we do not buy into the rally and instead continue to recommend selling equity strength in anticipation of a more substantial liquidation over the coming weeks. At the end of the day, we see US equities much lower, and the question over the short-term is whether we stall here and head lower, or whether we head back towards the 2012 highs from March before rolling over and triggering a more conventional bearish double top formation. As this outlook pertains to the S&P, we look for setbacks to extend below 1,300 over the coming weeks, with any upside well caped below 1,450. In short, our bottom line macro strategy is to wait a bit longer and then aggressively buy USDs across the board, while also selling global equities and other risk correlated assets. From a currency standpoint, those markets with higher interest rates should be most exposed going forward and most subject to relative underperformance. 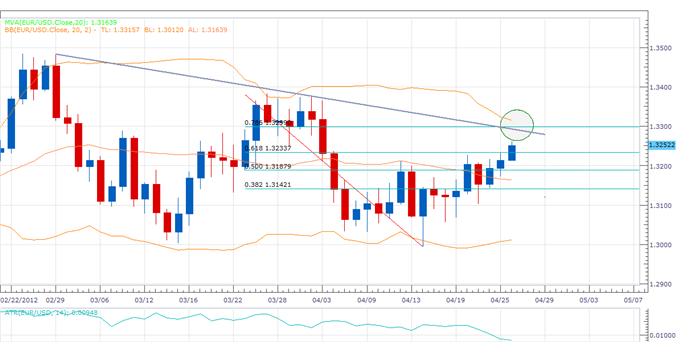 EUR/USD: Although the latest rally has been impressive, we contend the market is still locked within a more well defined medium to longer-term downtrend off of the 2008 record highs, and as such, looking to sell rallies in 2012 is the preferred strategy. The rally has now extended beyond 1.3200 and from here we see scope for additional upside towards 1.3300. However, once the 1.3300 level is tested, there is a very compelling technical argument to be made for a bearish resumption. A closer look at the 1.3300 level shows a confluence of resistance which includes the obvious psychological barrier itself, some falling trend-line resistance off of the February 2012 peak, the upper bollinger band, and a very attractive 78.6% fib retrace off of the most recent March-April, 1.34400-1.3000 high-low move. As such, we really like the idea of fading the strength to this area if it is tested today and will place our entry just over 1.3300. STRATEGY: SELL AT 1.3310 FOR AN OPEN OBJECTIVE; STOP-LOSS ONLY ON ANY DAILY CLOSE (5PM NY TIME) ABOVE 1.3410 (PREVIOUS LOWER TOP/MARCH PEAK). 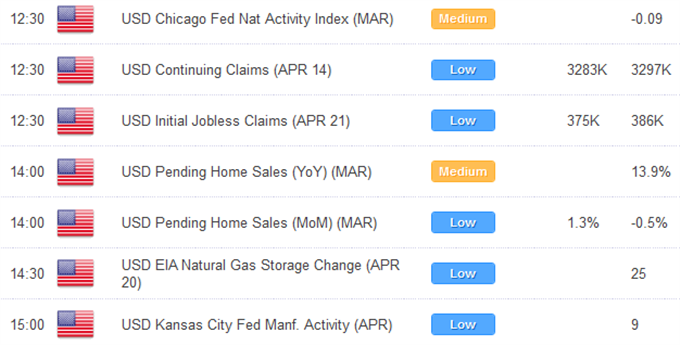