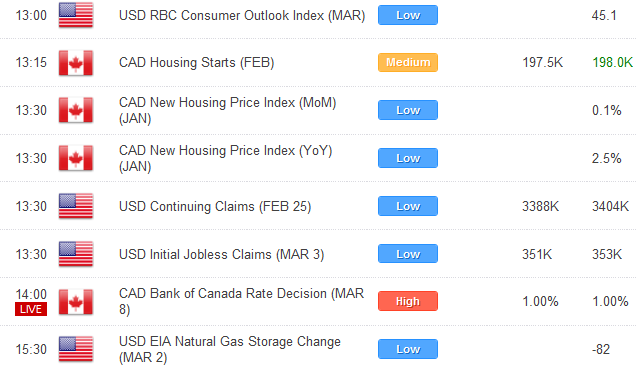 Thursday’s central bank event risk has done very little to influence the markets, with participants more focused on talk of a favorable outcome from the Greek PSI. Really, this comes as no surprise with all three central banks already having been widely expected to leave policy on hold. However, there was a good deal of uncertainty over the Greek PSI outcome, and talk that there would be an eventual participation rate of 90% was enough to inject a very solid bid tone in the market. The Euro surged through some key short-term resistance by 1.3225, while all currencies showed gains against the buck, with the exception of the Yen. Official results from the PSI will not come until 6:00GMT Friday. Also seen propping sentiment were reports out of China that the government was predicting a much brighter 2012 growth forecast of 8.8%. Still, we would recommend proceeding with caution and think that the upbeat tone of the markets right now could turn around rather quickly. Markets have been in a roller coaster of choppy trade for the past several weeks and just when it looks as though things might get going one way, they quickly reverse course.

Relative performance versus the USD Thursday (as of 13:00GMT)

Overall, our technical studies are warning of additional risk off sentiment in the markets going forward, with global equities starting to show signs of rolling over and higher yielding currencies also confirming a bit. At this point it is still too early to make any aggressive calls, and we will wait to see how the markets respond today for added clarity. Things will continue to be interesting into Friday, with the monthly US NFPs due out and also likely to generate a good deal of volatility. Signs of improvement in the US economy have been forcing the Fed to perhaps be thinking a little less dovish than many had hoped, and a strong number tomorrow could actually force additional risk off trade on fear that the Fed will look to reverse policy sooner than later.

Elsewhere, Australian employment data came out a good deal weaker than expected, which already follows a more dovish RBA and softer GDP this week. The Australian Dollar has still managed to hold up surprisingly well in the face of all this, and much of the bid tone continues to be driven off yield differentials and external factors. Still, we can not ignore the underlying fundamentals on the local front and continue to project relative underperformance in the currency going forward. Perhaps a more significant pullback in highly correlated global equities markets or more bad news out of China will be the catalyst to trigger the anticipated weakness in the commodity currency.