The wild price action in the Yen from Friday extended into Monday trade, with the currency continuing with a dramatic decline that resulted in amazing moves in USD/JPY and the Yen crosses. USD/JPY traded to a 9-month high, while EUR/JPY stalled just shy of 110.00 barriers. The moves were even more impressive with the hourly studies on EUR/JPY going parabolic to produce reading above 90. We have since seen some profit taking on Yen shorts, but the currency remains exceptionally well offered overall and it appears that longer-term players who had been bullish on the Yen for several years, could finally be looking to shift their portfolios in anticipation of a cyclical high in the Yen. At this point it is too early to call for any meaningful structural shift, but there are very clear signs emerging that highlight this possibility.

Relative performance versus the USD Monday (as of 11:00GMT)

Overall, all other currencies remained rather stable and looked to consolidate Friday’s moves. Although there were some productive signs out from the G20 over the weekend, the conference failed to influence markets. The Euro has stalled ahead of 1.3500 for now and will be looking to extend gains beyond the psychological figure over the coming sessions. Market participants seem to have found renewed confidence in the single currency following the Greek deal, and the belief that no disasters are imminent, coupled with some notable ECB LTRO action could be doing a good job to prop the market. Still, we have our doubts and see any additional gains in EUR/USD as limited to the 1.3600-1.3700 in favor of a broader bearish resumption off of the downtrend from 2008. The risks of contagion from the Eurozone are still very real and many of the local economies are still struggling to keep above water.

Elsewhere, with the Yen garnering all of the attention, it might be hard to notice another interesting development, with the Australian Dollar starting to show signs of relative underperformance. A downbeat RBA Minutes in the previous week started to inspire some profit taking on Aussie longs, while political strife, and talk of foreign investors reducing exposure to the higher yielding currency, were all seen factoring into some of the price action. Even the very well offered EUR/AUD cross rate has begun to show signs of improvement, with the market breaking above some key resistance at 1.2500 to suggest that a longer-term bottom could finally be in place.

Looking ahead, the key events to be on the lookout for this week are Wednesday’s ECB LTRO auction, Greece’s vote on additional austerity measures and Fed Chair Bernanke testimony on Wednesday and Thursday. The direction of Fed policy is always critical for global macro markets and investors will once again hang on every word from Mr. Bernanke in an attempt to gain further insight into the direction of US monetary policy going forward. In the previous week, we heard some hawkish comments from Fed Bullard who came out in opposition to the idea of a third round of quantitative easing, and it will be interesting to see if any of Bullard’s sentiments are shared by the Fed Chair this week. Moving on, global equitiesare looking top heavy to us, and we feel it is worth considering a pullback in risk sentiment over the coming days. 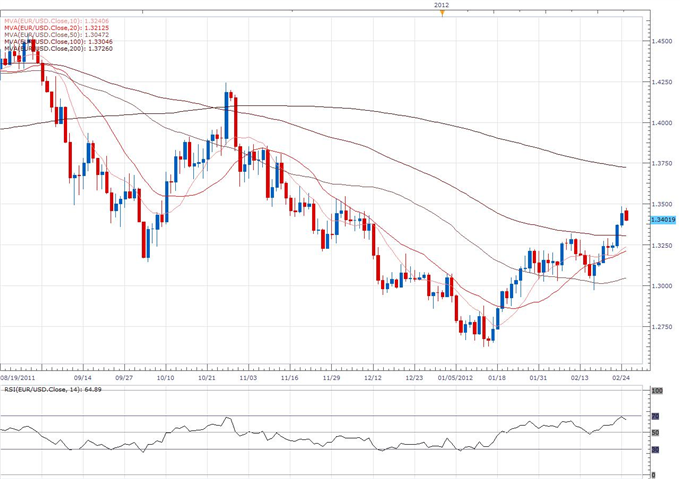 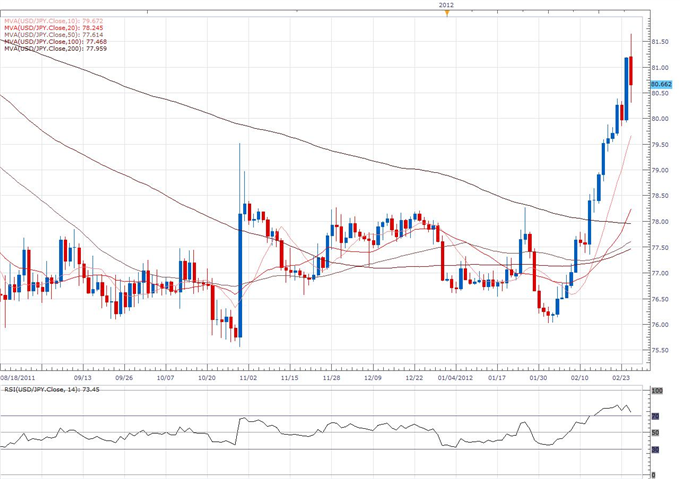 USD/JPY:The market is doing a good job of showing the potential for the formation of a major cyclical bottom after taking out the 200-Day SMA and now clearing psychological barriers by 80.00 for the first time in 6 months. This further solidifies basing prospects and we could be in the process of seeing a major bullish structural shift that exposes a move towards 85.00-90.00 over the coming months. At this point, only back under 77.00 would delay outlook and give reason for concern. However, in the interim, it is worth noting that gains beyond 80.00 over the coming sessions could prove short-lived with technical studies at their most overbought levels in over 10 years and warning of some corrective declines towards previous resistance now turned support by 78.00 before bullish continuation. Selling around 81.00 is therefore the preferred strategy over the coming sessions. 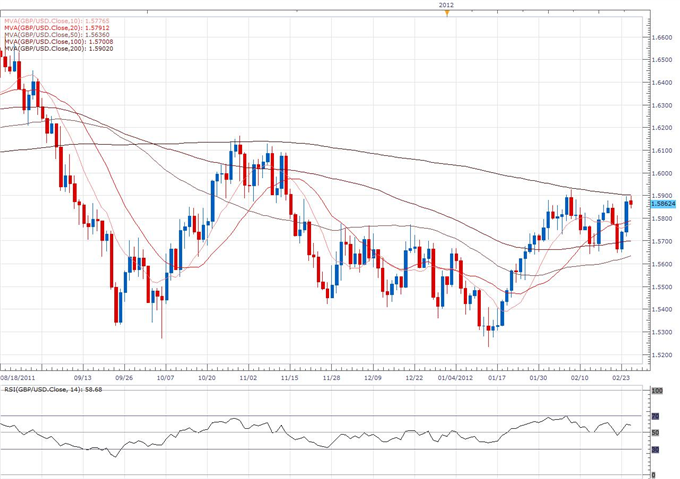 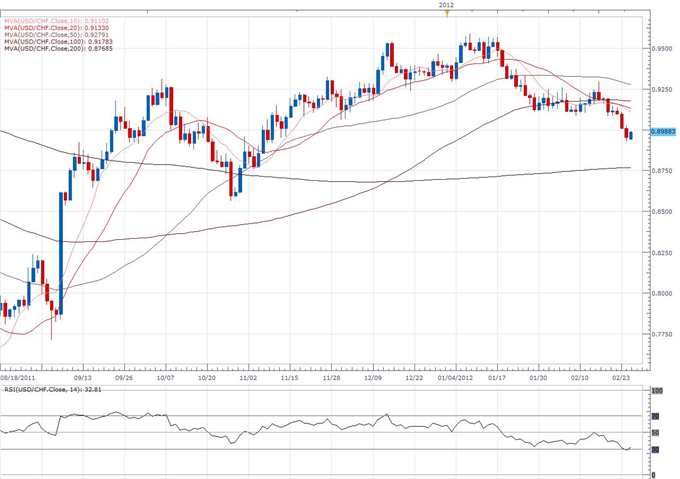