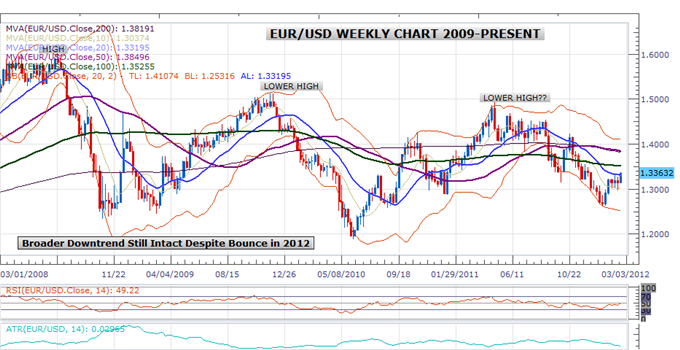 Many traders are scratching their heads, wondering why the Euro has been so well bid in 2012 and why it continues to be well bid in the aftermath of an already anticipated Greek bailout that carries with it a lot of uncertainty in terms of execution and potential success. After all, the fallout from the second Greek bailout still leaves many pricing in the very real risk of a default by the nation, with investors also questioning the ability to effectively implement austerity measures. When one adds in the lack of detail on IMF contribution to the bailout, the upcoming Greek elections, the latest bailout hesitancy from the Bundestag, and the latest Fitch downgrade, there really doesn’t seem to be any good reason for the Euro to be so well bid. At most, perhaps some quiet consolidation. Still the Euro has been very well bid and trades to fresh 2012 highs after breaking out of a multi-session consolidation on Thursday. So why is this?

Relative performance versus the USD Friday (as of 11:00GMT)

What it comes down to seems to really not be about whether there will be more problems ahead for Greece, but more about whether the latest bailout and rescue will hold things together long enough for any fallout (when it does happen) to be less relevant to markets at that time than it would be in the current environment. Right now, the Eurozone and global economy are extremely fragile and any signs of additional stress have been amplified and weigh tremendously on risk sentiment. However, should the latest bailout buy enough time for other areas of the Eurozone and global economy to show a more sustainable recovery, any problems that emerge several months or years down the road become much less concerning to investors. Our colleague, a leading strategist at one of the major US banks says it best in his latest report. “Unless you think that the deal will fall apart in the next couple of months, discussing the implausibility of the 2020 targets is more literature than finance.”He also adds in the report that his conjecture is that most of the negative assessment of the bailout package is irrelevant since there was little expectation either before or after the agreement that Greek debt to GDP will approach 120% in 2020.”

So, this is our best guess for the continued strength that we have been seeing in the Euro. Technically, the price action is much easier to reconcile. A closer look at the medium-term EUR/USD chart shows the market in a well defined downtrend off of the 2008 record highs. The market has been posting a series of consecutive lower lows and lower tops since 2008 and continues to show room for plenty of downside ahead, even with the latest bounce. From a medium-term perspective, and within the context of the medium-term chart, this latest rally in 2012 is a very small correction within a broader down move that hardly compromises the integrity of the trend. This rally could still even extend towards 1.4000 in theory before once again stalling out and the trend would remain bearish. In our view, we are now open to the possibility for additional gains into the 1.3600 area over the coming days with the market finally stalling somewhere ahead of the 200-Day SMA. The projected gains are derived from a measured move upside extension which would be the equivalent to the approximate 300 point range of the latest consolidation between 1.3000 to 1.3300. While the market could just as easily stall out at current levels or ahead of this potential upside objective given our underlying bearish EUR/USD outlook, we still need to anticipate this possibility given the recent moves.

Fundamentally, while we have tried to make some sense of the Euro rally as highlighted above, we still ultimately do not buy into the idea of any prolonged Euro strength and feel that the Eurozone is still very much on shaky ground with intense risks for contagion to other countries within the region. All things Greece aside, we must not forget the troubles in Portugal, Ireland, Spain, Italy and France. These economies have been anything but strong and there is no good reason to think that we have heard the last from the troubles in these countries. One bailout begets another and so on and we have a very hard time digesting the possibility that the Eurozone is now on a stable path to recovery with little in the way of any meaningful obstacles ahead. Lets us also not forget the fact that from a growth perspective, with all of the money that has been dumped into fixing the problem, there is very little room for any real growth in the region in the years ahead. Still, we feel it is worth noting that we see the Eurozone potentially outperforming against some other economies going forward, namely China, the commodity countries, and emerging markets. We project a third wave of the global crisis to materialize in these economies that have managed to seemingly remain immune to this point. So while we do see the Euro once again at risk against the US Dollar and potentially the Pound going forward, we feel there is plenty of upside against the commodity bloc and emerging markets. 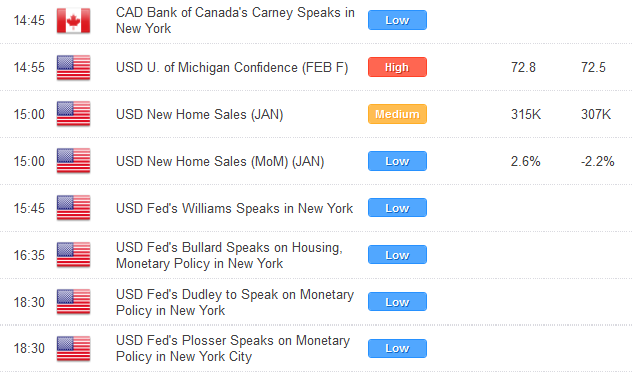 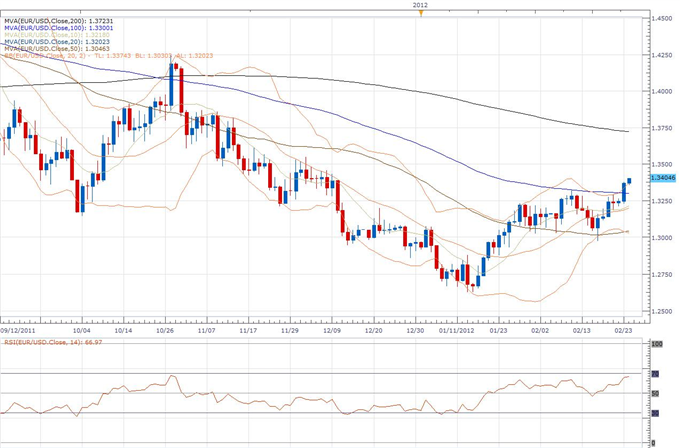 EUR/USD: The latest break and daily close above 1.3325 ends a recent bout of multi-session consolidation and now opens the door for the next upside extension towards the 1.3600-1.3700 area over the coming days. While our broader outlook remains aggressively bearish with a downside target by 1.2000 in 2012, the 2012 correction within the broader downtrend off of the 2008 record highs is still in play, and shows potential for additional gains. Still, we prefer to remain sidelined as our bearish bias has us looking for opportunities to sell rather than attempting to buy into a corrective rally within a broader downtrend. We would also not rule out the possibility for a topside failure well ahead of 1.3600-1.3700, but given the latest break, the risk for additional gains seems like a very real possibility that needs to be considered and anticipated. Back under 1.3230 will be required at a minimum to alleviate immediate topside pressures. 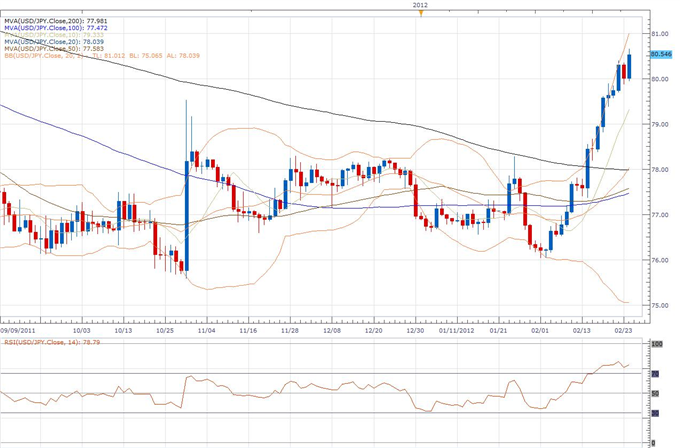 USD/JPY:The market is doing a good job of showing the potential for the formation of a major cyclical bottom after taking out the 200-Day SMA and now clearing psychological barriers by 80.00 for the first time in 6 months. This further solidifies basing prospects and we could be in the process of seeing a major bullish structural shift that exposes a move towards 85.00-90.00 over the coming months. At this point, only back under 77.00 would delay outlook and give reason for concern. However, in the interim, it is worth noting that gains beyond 80.00 over the coming sessions could prove short-lived with technical studies at their most overbought levels in over 10 years and warning of some corrective declines towards previous resistance now turned support by 78.00 before bullish continuation. Selling rallies around 81.00 is therefore the preferred strategy over the coming sessions. 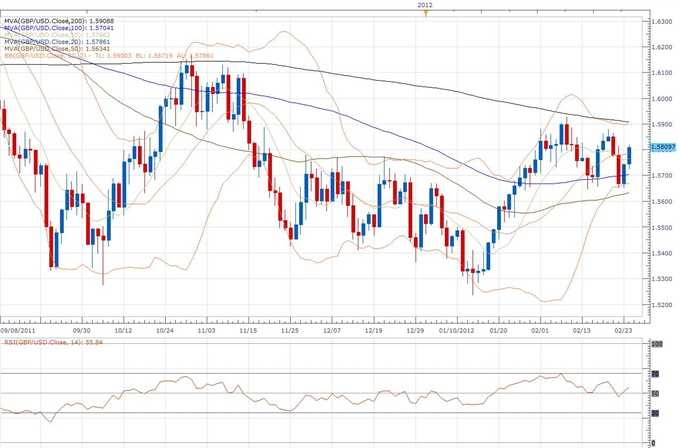 GBP/USD: Rallies have once again been well capped ahead of the 200-Day SMA in favor of yet another bearish decline. But setbacks have stalled by some key multi-session support by 1.5645, and it will take a break and close back below this level to officially force a shift in the structure and accelerate declines. Until then, expect some more choppy consolidation and potential range trade between 1.5650-1.6000. 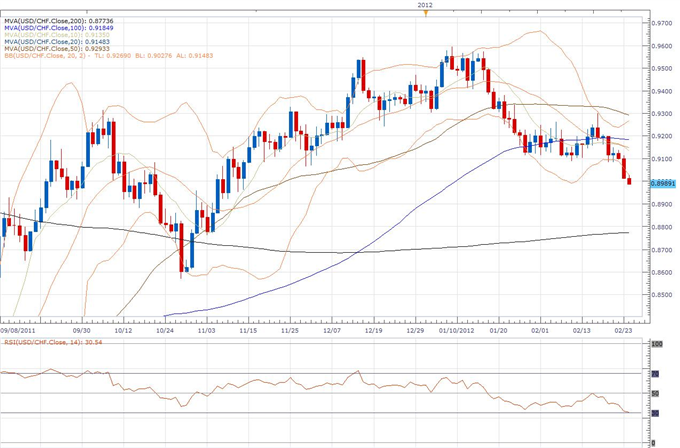