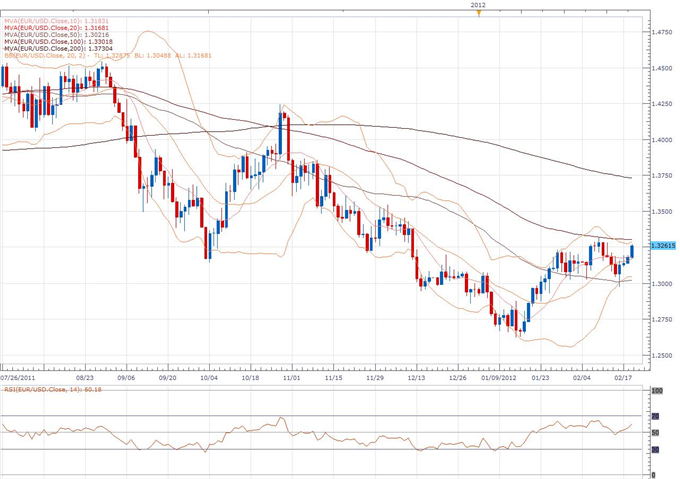 Progress out of Greece over the weekend has been the primary driver of the latest round of risk on trade, with most major currencies tracking higher against the buck as a result. Eurogroup meeting should therefore be an important moment for the process and help to at least get this saga somewhat out of the way. Focus will also shift to the G20 this weekend where more pressure will likely be placed on European officials to implement further measures to help keep local economies in check. There are however some mitigating factors to the Greece deal which need to be considered, including the Greek debt swap deal with the PSI after the latest chatter that some creditors are already preparing to take legal action against the Greek government.

Relative performance versus the USD Monday (as of 11:45GMT)

Overall, Monday’s session of trade should be taken with a grain of salt as more time is needed to see how things play out with Greece. The US markets are also closed for the long holiday weekend which makes the price action even less reliable. We would therefore recommend proceeding with caution. We also remain unconvinced with the relative strength in the global equities markets, and see all of these major indices at risk for some much needed and healthy corrective declines over the coming days. Fundamentally, this would not be a risk positive development and should expose the higher yielding currencies. Still for now, one of the biggest stories in the FX market has been the Yen, with the currency remaining under intense pressure and taking out its October intervention lows against the US Dollar (USD/JPY 79.55 October highs). It now looks as though USD/JPY could be in the process of carving a complex basing pattern which opens the door to significant gains over the coming months.

Monday’s European session produced very little to talk about, with the only notable developments coming from Germany, with the finance ministry becoming increasingly optimistic with a Greece deal, and he Bundesbank delivering an upbeat monthly report on the local economy. Elsewhere, very little in the way of volatility from the Australian Dollar despite China weekend moves to once again cut the reserve requirement ratio. All is expected to be very quiet for the remainder of the day with North America cosed for holidays. 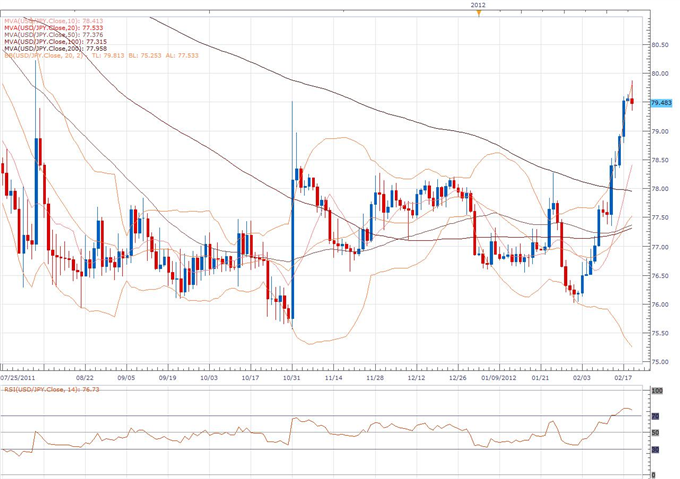 USD/JPY:The market has broken back above the 200-Day SMA for the first time in several months, while also managing to break to fresh 2012 highs beyond critical resistance by the October highs at 79.55. This further solidifies basing prospects and we could be in the process of seeing a major bullish structural shift that exposes a move towards 85.00-90.00 over the coming months. At this point, only back under 77.35 would delay outlook and give reason for concern. 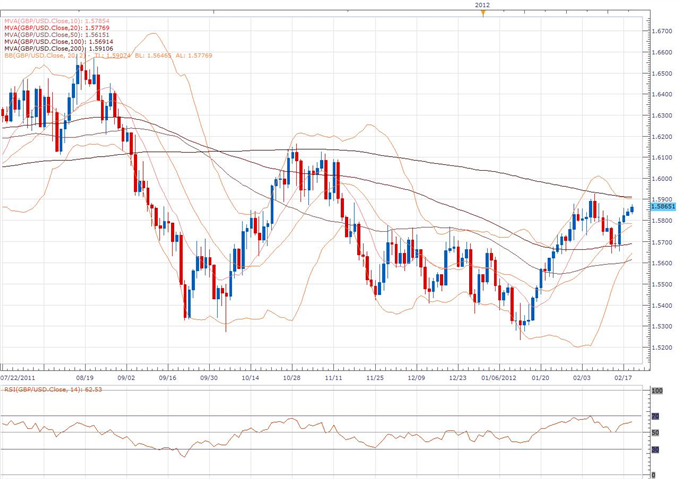 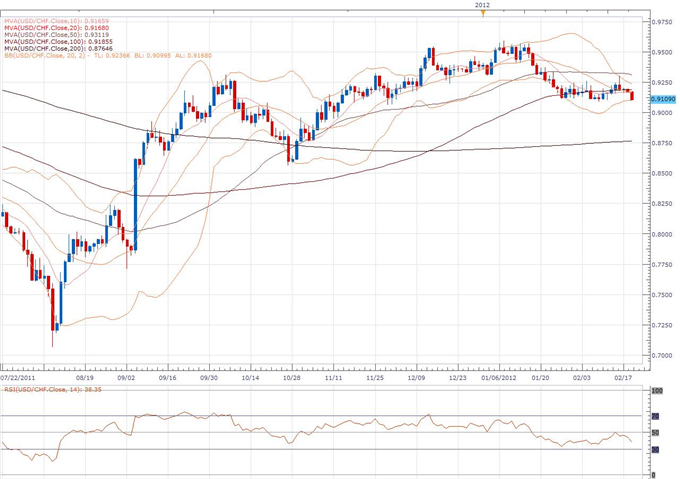 USD/CHF: Setbacks have been very well supported in early 2012 ahead of 0.9000, and it looks as though the market could finally be carving a medium-term higher low ahead of the next major upside extension. We will now look for a weekly close back above 0.9300 to provide added confirmation for probability of underlying bullish resumption. Ultimately, look for a push back above 0.9600 and towards 1.0000 over the coming weeks. Only a break and weekly close below 0.9000 would negate and give reason for concern.