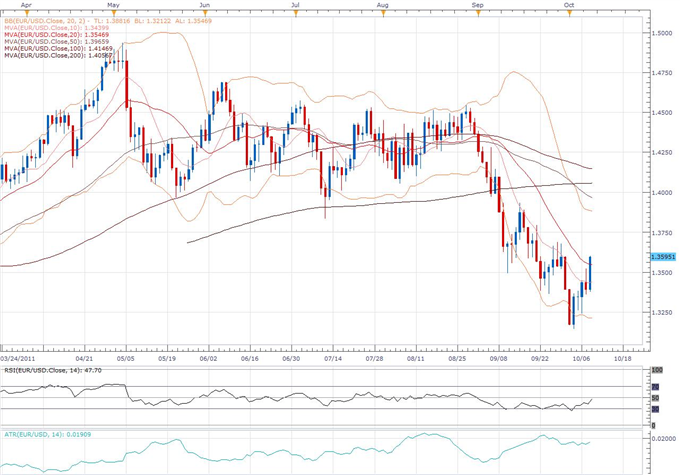 Risk sentiment has been given a bit of a boost into the early week, with currencies, equities and commodities all tracking decently higher into European trade. Markets had initially been weighed down on Friday following the news of Fitch downgrades to Italy and Spain, but were able to shrug off the downbeat development after taking more time to fully digest solid US employment data. Also seen helping to accelerate rallies in risk correlated assets was the weekend story that Germany’s Merkel and France’s Sarkozy had promised the delivery of a comprehensive plan by the end of the month to rid the eurozone of its debt crisis.

Relative performance versus the USD on Monday (as of 11:00GMT)

Merkel and Sarkozy said their goal was to come up with a sustainable answer to Greece’s woes, look to find a way to recapitalize European banks, and plan for a deepening economic coordination between the eurozone’s members by the November G20 summit. Elsewhere, Belgium and Luxembourg have agreed on a rescue plan for Dexia, but any potentially positive price action resulting from this headline has been offset by Moody’s, with the rating agency placing Belgium’s ratings on review for a possible downgrade.

Still, we continue to warn against buying into these risk rallies, as the overall state of the markets remains highly fragile and much work needs to be done before any sustainable economic recovery can be achieved. UK’s Cameron was out recently echoing these sentiments after saying that European leaders needed to adopt a “big bazooka” approach to resolving the crisis. Cameron added that time was short and that the eurozone was contributing more to the overall uncertainty in the global economy than any other region. Cameron went on to suggest the need for a substantial increase in the firepower of the EFSF, while at the same time urging an improvement in the banking sector and governance of the eurozone.

Some would however recommend that Cameron spend more time focused on his own economy with UK fundamentals also showing signs of additional stress. The normally more hawkish BOE Weale was out commenting that there is still more room for additional quantitative easing expansion after citing a sharp deterioration in the UK’s prospects.

At this point, technical studies still classify the risk rallies as corrective, and the overall trend remains risk negative. The Euro is in the process of correcting out from the recent lows by 1.3145, and while the markets holds below 1.3690, a fresh lower top is sought ahead of the next downside extension below 1.3145. Market participants should take their cues from this market and only back above 1.3690 would compromise the current structure. Looking ahead, all is quiet in North America, with the US calendar empty for Columbus Day. US equity futures and commodities markets are well bid.

EUR/USD: Setbacks have stalled out for now by 1.3145 with the market in search of a fresh lower top below 1.3690 ahead of the next major downside extension below 1.3000. Overall, our outlook remains quite bearish and we continue to project deeper setbacks into the lower 1.2000’s over the coming weeks. Ultimately, only back above 1.3690 would delay outlook and give reason for pause. As such, we have opted to employ our ATR analysis and with the market having well exceeded its daily average true range of 180 points ahead of the North American open, we like the idea of fading the strength intraday. Additionally, the price has shot through the 20-Day SMA to leave the hourly RSI well overbought and in need of some relief. Look to hold the position into the New York close (5pm NY Time) on Monday and then reassess. POSITION: SHORT @1.3602 FOR AN OPEN OBJECTIVE; STOP-LOSS 1.3710.