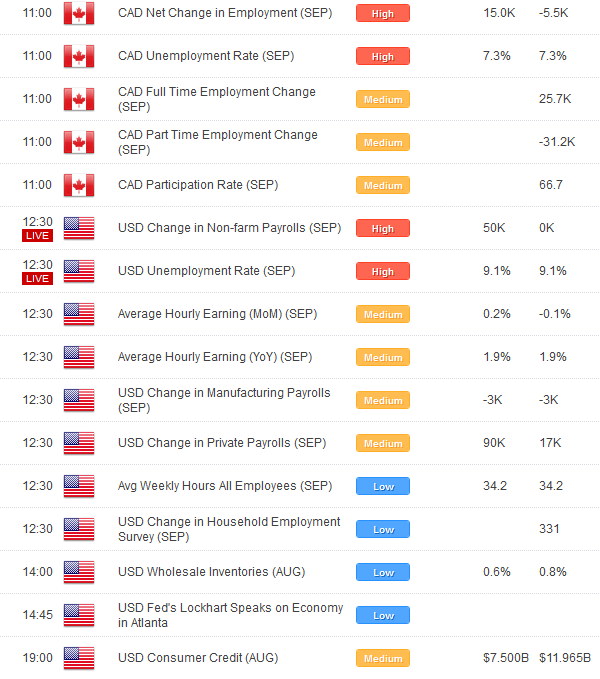 Markets have been relatively quiet on Friday thus far, with investors seemingly content to allow for some consolidation ahead of the highly anticipated US non-farm payrolls report due out in the North American session. Overall, the reaction to Thursday’s central bank event risk has been rather positive, with officials sending a message that they are addressing the current economic crisis and taking measures to provide as much accommodation and structural reform as needed. The Bank of England made this clear after unexpectedly upping its asset purchase target by GBP75B to GBP275B, while the ECB turned up its liquidity dial for banks, and announced the renewal of its covered bond program, amongst other things. The bank recapitalization talk in the eurozone is also helping to bolster sentiment somewhat, and the Euro has found its way back above 1.3400 thus far.

Relative performance versus the USD on Friday (as of 10:30GMT)

However, as we wrote on Thursday, any rallies in the euro and currencies in general should continue to be very well offered, with the markets far from out of the woods and these newly implemented central bank measures only reminding us of just how bad things really are. On that note, recent reports cite a tension between Germany and France on whether the EFSF should have limits on government bond purchases. Meanwhile, the saga in Greece lingers on, with the country hanging by a thread as the risk of default still remains quite real, with bailout talks still in progress. Elsewhere, Dexia has been getting some negative attention after the troubled bank was downgraded by S&P.

Japanese central bank event risk hasn’t exactly been a market mover overnight, and this was to be expected, with the Bank of Japan unanimously leaving its call rate target unchanged at a range of 0-0.10%, while refraining from adopting further easing measures. The central bank did however extend its loan scheme for quake hit regions by 6 months to April of 2012. USD/JPY is slightly lower on the day but remains locked in a very tight multi-day range that has been confined mostly to the 76.00’s. In M&A related activity, EUR/JPY has been getting some support after Sony was rumored to be nearing a deal to buy out Telefon AB L.M. Ericcson’s stake in their mobile phone joint venture. 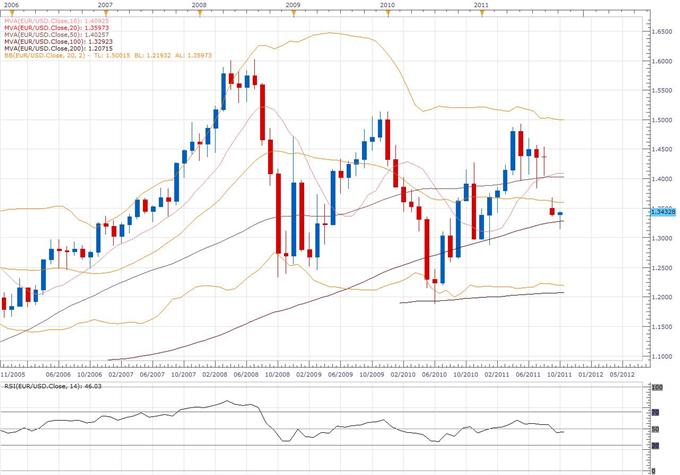 EUR/USD:The market is in the process of carving out a major lower top below 1.5000 with fresh downside projected over the coming weeks and months back towards the 1.2000 area. In the interim, any rallies should be well capped ahead of 1.4000, while back below 1.3000 will accelerate declines. 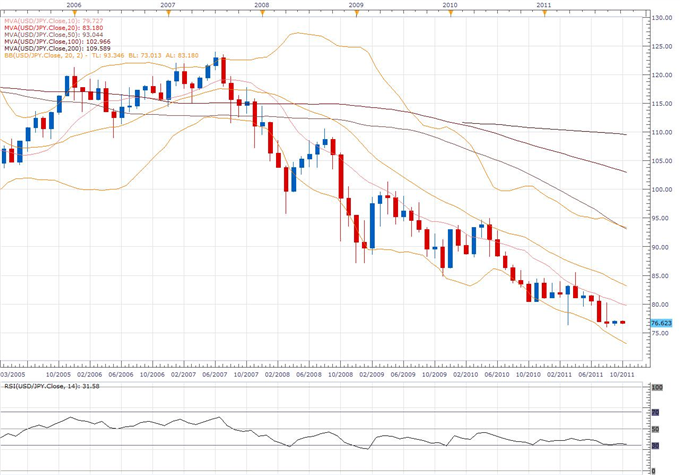 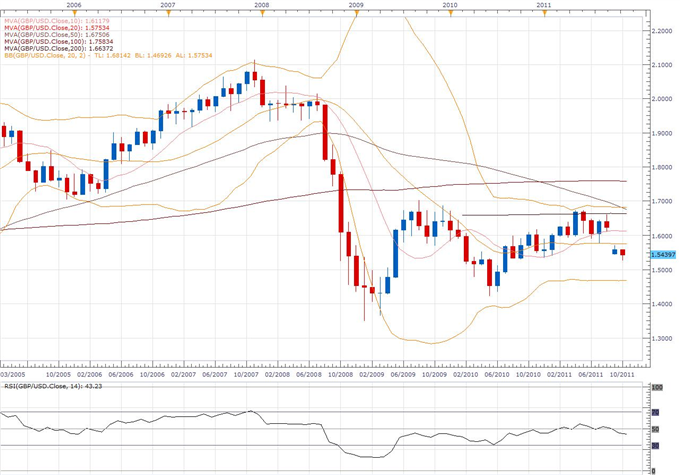 GBP/USD:The longer-term chart shows the market locked in a broader consolidation largely defined between the 1.4000-1.7000 area. The latest failure by 1.7000 has opened some renewed selling pressure, and we look for additional weakness over the coming weeks back below 1.5000 and towards the internal range lows by 1.4000. Any rallies should therefore be well capped ahead of 1.6000. 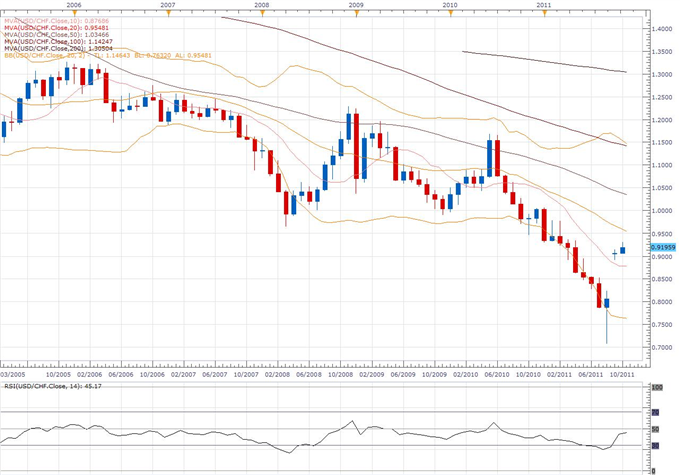 USD/CHF:We have seen a very impressive recovery out from the record lows just shy of 0.7000 over the past several weeks, with the price racing back towards critical psychological barriers at parity. While inter-day studies are looking a little stretched and warranting some corrective selling to allow for some necessary consolidation, we continue to project considerable upside over the medium and longer-term. Look for a break above 0.9500 to accelerate gains towards and through parity from where the next objective will come in by 1.1000. Any setbacks are expected to be well supported above 0.8500. 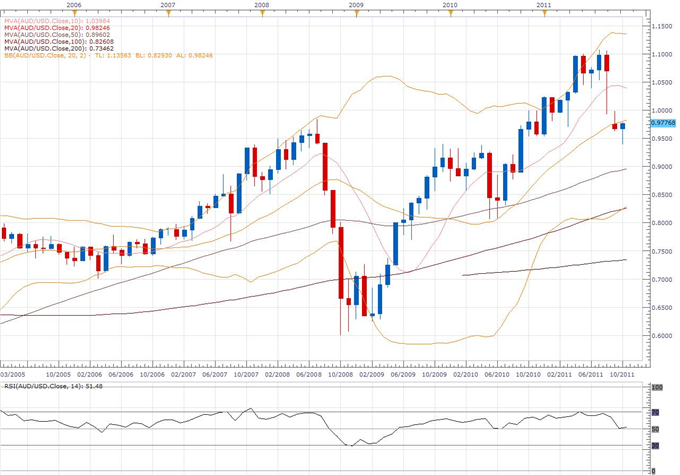 AUD/USD:The market is finally confirming the formation of a major top by post float record highs set back in the summer at 1.1080, with the latest break back below parity confirming our bearish outlook and opening the door for more significant declines going forward. From here we look for any rallies to be well capped below parity on a weekly close basis, with a break below 0.9000 to accelerate declines and expose 0.8500 further down. 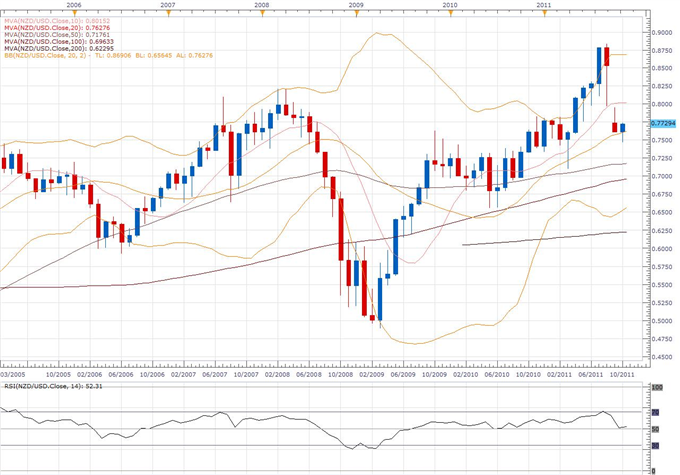 NZD/USD:The market is finally confirming the formation of a major top by post float record highs set back in the summer at 0.8845, with the latest break back below 0.8000 confirming our bearish outlook and opening the door for more significant declines going forward. From here we look for any rallies to be well capped below 0.8000 on a weekly close basis, with a break below 0.7100 to accelerate declines and expose 0.6600 further down. 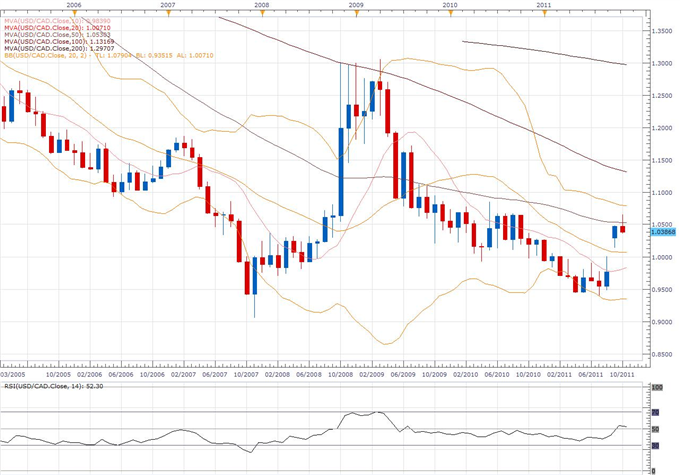 USD/CAD:Inability to break to fresh record lows below 0.9000 in 2011 has opened the door for a more meaningful bullish reversal, with the market now carving out what we believe to be a significant longer-term base. From here, any setbacks should be well supported by parity, with a fresh higher low sought out by the psychological barrier ahead of the next major upside extension towards 1.1000-1.1500 further up.