Volatility Expected to Die Down Ahead of Anticipated Fed Event Risk

Most of the news coming across the wires and moving markets in Wednesday trade has come on the back of developments out of Greece, where good progress is supposedly being made on the troika talks. Although there is no deal to speak of at this point, market participants have been starving for any form of positive news in the region and this progress is certainly welcome. Also propping sentiment in the region have been comments from Greek foreign minister Lambrindis who says that the country will avoid default and absolutely remain in the euro-zone.

Relative performance versus the USD on Wednesday (as of 11:15GMT)

While sentiment towards Greece has picked up a bit, it still hasn’t done much to bolster broader sentiment with European equities weighed down ahead of the North American open. One currency which has been interesting to watch has been the Yen which is threatening a break to fresh record highs against the buck. Although Japanese officials have been quite clear that decisive action will be taken if necessary, this line from the government is not doing anything to keep Yen bulls away at the moment and a much stronger tactic will be needed it seems to prevent further currency appreciation.

Elsewhere, the Pound is holding up rather well considering the release of the Bank of England Minutes which produced some dovish rhetoric. While on the face of it, the Minutes revealed no changes to the voting breakdown on rates and asset purchases, the policy consideration discussed going forward still outlined a slant to the accommodative side. Also seen weighing on the currency was a weaker than expected public finance number which was overshadowed by the Minutes release. We continue to expect to see this market and other currencies broadly offered on rallies so long as the outlook for the broader global macro economy remains in question.

Looking ahead, volatility is expected to lighten up ahead of the highly anticipated FOMC rate decision due later in the day. At this point, there has been a good deal of speculation as to whether a third round of quantitative easing will be implemented and it seems as though anything short of additional monetary easing will be construed as risk negative. We are of the opinion that the Fed will stop short of any formal introduction to QE3 but will at the same time appease investor concern through the mention of alternative strategies that promote appropriate stimulus to inspire recovery in the US economy. If the Fed comes out on the more dovish side then expect the market reaction to be favorable with equities seen rallying while the US Dollar sells off. However, if the Fed is more balanced with its outlook then we could see additional pressure on US and global equities, with the buck accelerating to the upside. 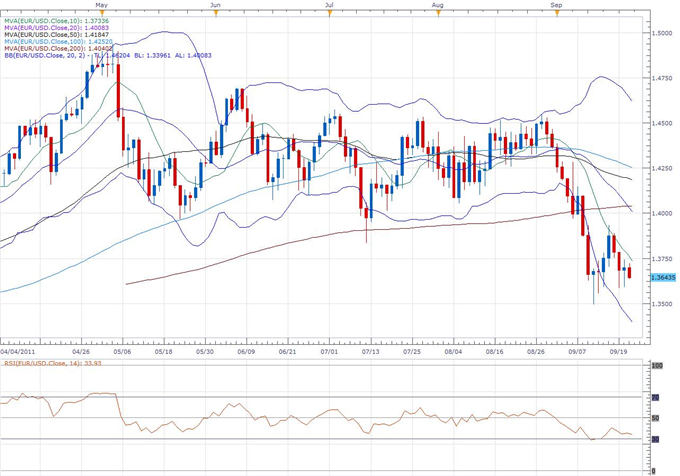 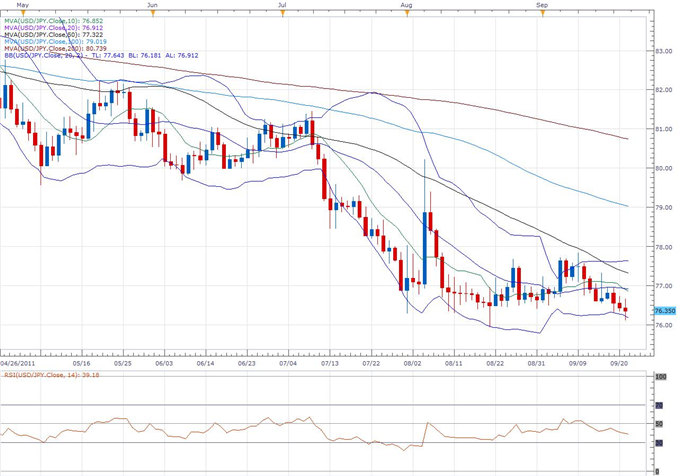 USD/JPY:This is a market that looks like it trying very hard to establish some form of a base after recently setting fresh record lows just under 76.00. Although the downtrend remains intact and has been fairly intense, longer-term studies welcome the prospects of the formation of a material base and shift in the overall structure. Price action over the past several days has been confirming, with the market very well supported in the 76.00’s and unable to extend the downtrend to fresh record lows. From here, we look for the establishment back above the 50-Day SMA to reaffirm our recovery outlook and accelerate gains towards next key resistance by 80.25 further up. However, Tuesday’s close back below 76.50 delays recovery prospects and likely opens a drop to fresh record lows below 75.95 before the market considers the anticipated bullish reversal. 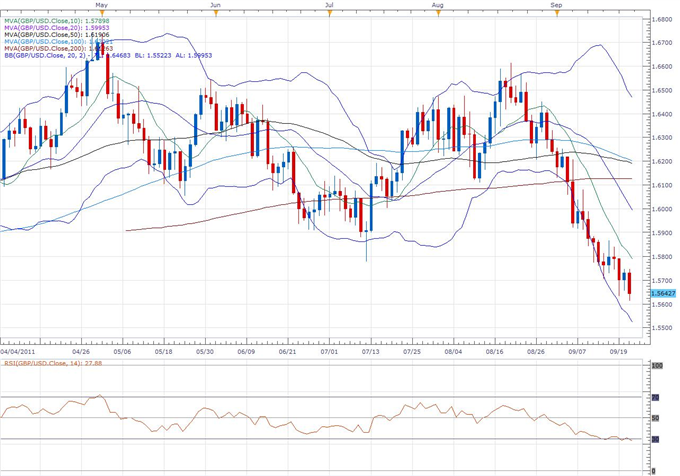 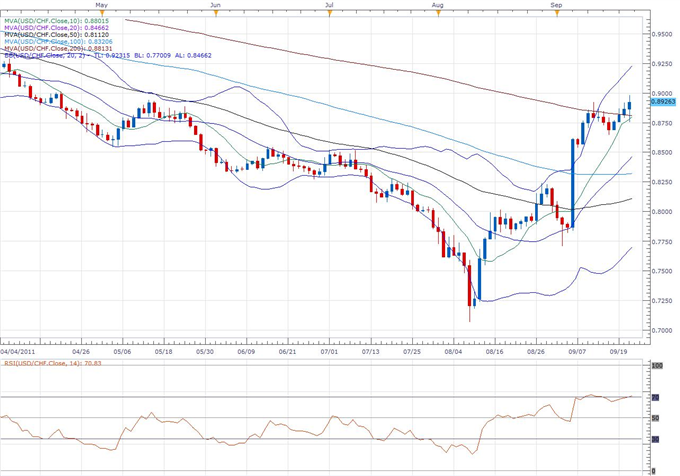