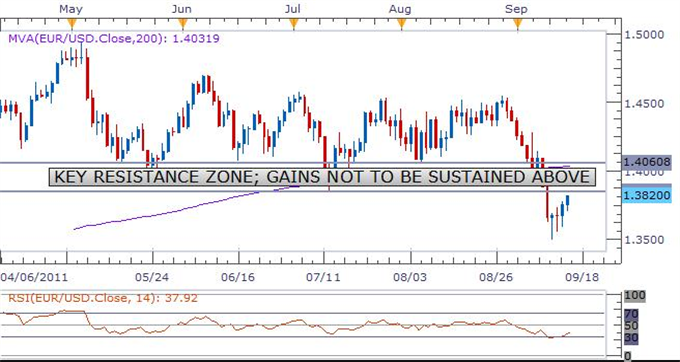 With all of the see-sawing in sentiment towards the Eurozone and speculation as to whether or not a viable solution will be implemented to rescue the region, we have grown exhausted and instead will defer to the technical backdrop which provides a clearer insight into the direction of the market over the coming sessions. We will stick to analysis in Eur/Usd and extrapolate how things should then translate on the fundamental front.

EUR/USD: The sharp pullback below the July lows and establishment below the 200-Day SMA solidifies the prospects for the carving of a major lower top on the monthly chart which now ultimately projects additional declines down towards the 1.2000 area over the coming weeks and months. However, with technical studies looking stretched on an inter-day basis, we see the RSI taking time to unwind from oversold levels to allow for the price to correct before once again resuming a downward trajectory below 1.3500. From here, look for additional gains over the coming sessions back into the 1.3835-1.4055 region, with the market seen elevating into this previous support now turned resistance zone (July low, 200-Day SMA, and August low) before once again finding some solid offers and the formation of a shorter-term lower top. Ultimately, any additional gains beyond 1.4055 should not be sustainable and only a break and close back above this level would delay our bearish outlook.

FUNDAMENTAL IMPLICATION: The price action over the coming days translates into a situation where sentiment is bolstered temporarily on the expectation the Eurozone will be able to manage its way out of the current crisis and avoid a default in Greece, downgrade to Italy and major banking crisis, amongst other things. However, we feel that any hope for such an outcome will prove fleeting and the reality of the severity of the current situation will once again take hold to fuel a renewed fear and investor panic that will open an intensified bout of risk correlated liquidation. The Eurozone is so disjointed and the global macro economy is so riddled with instability that any idea of a legitimate reversal in risk appetite would be wishful thinking at this point.