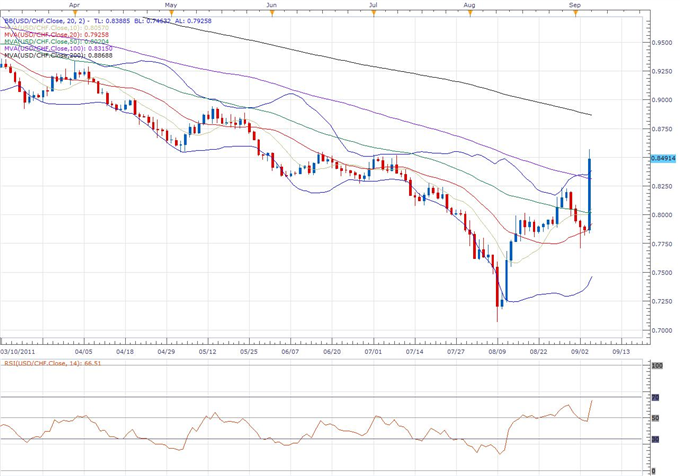 In an unprecedented move the Swiss National Bank (SNB) has announced a commitment to set a base on the Eur/Chf exchange rate at 1.20 in an effort to aggressively protect the economy from the effects of rapid franc appreciation in recent years. The SNB in the past has said that deflationary pressures would push them into action, and the re-emergence of such pressures is allowing for a stronger case for the central bank to implement these colossal measures. Up until recently, efforts to stem the appreciation in the currency had failed and it seems as though this latest campaign which began several days back brings with it a legitimate policy where actions are finally speaking louder than words.

Relative Performance Versus the CHF on Monday (as of 11:00GMT)

The move on Tuesday has been violent and dramatic on the technical front, with the sell off in the Franc triggering a more substantial structural shift in the medium-term and longer-term horizons. With Eur/Chf back above 1.2000 and Usd/Chf taking out critical topside resistance at 0.8550, look for these markets to continue to find bids over the coming weeks and months as the dynamic shifts. Longer-term studies still show plenty of room for additional weakness in the Franc, although from a shorter-term standpoint, the best strategy is to stand aside and look for opportunities to buy into Eur/Chf and Usd/Chf dips when the dust settles. This same logic holds true and can be extended to other Swiss related crosses.

USD/CHF:The latest sharp reversal off of record lows just shy of 0.7000 is encouraging and could finally be starting to signal the formation for a major base. Weekly studies and monthly studies are also confirming with the formation of a very bullish bottom close. Tuesday’s acceleration of gains beyond critical resistance and a previous lower top at 0.8550 further confirms bullish bias and from here, we see room for fresh upside towards the 0.9000-0.9500 area over the coming days. 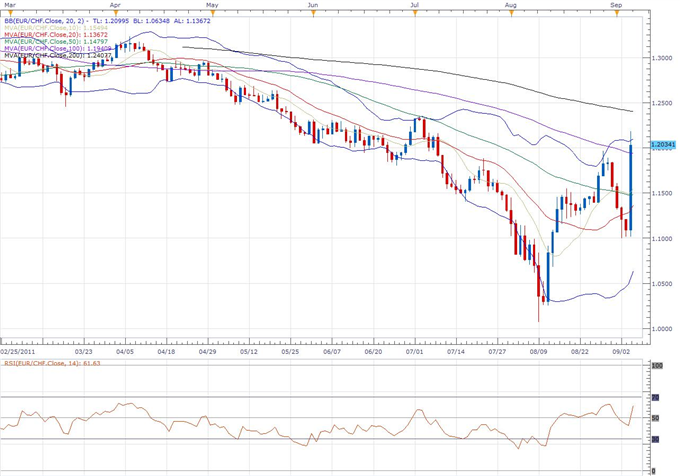 EUR/CHF:The latest sharp reversal off of record lows just shy of parity is encouraging and could finally be starting to signal the formation of a major base. Weekly studies are also confirming with the formation with a very bullish bottom close. Tuesday’s dramatic break back above 1.1975 now officially confirms a fresh higher low by 1.1000, above the 1.0075 record lows and opens a fresh upside extension with a measured move objective towards 1.3000 over the coming sessions. Look for any setbacks to now be well supported above 1.1500 on a daily close basis.