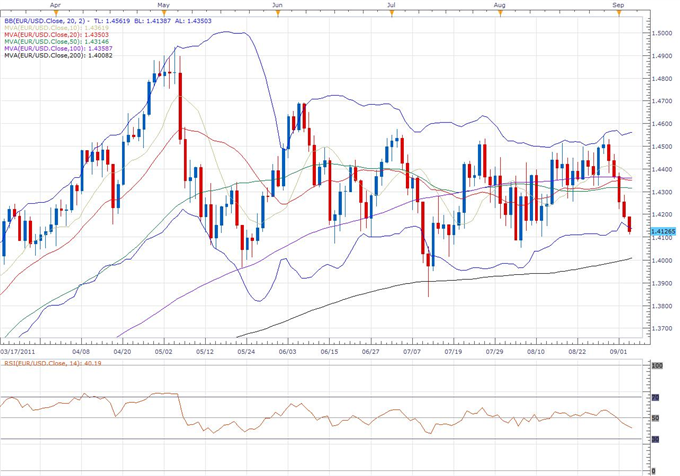 Although Monday’s session of trade is supposed to be lighter and less volatile on the back of a US long holiday weekend, things have been anything but, amidst a global macro economy that continues to show signs of meltdown. While Friday’s abysmal US non-farm payroll report might have acted as the catalyst for the latest slide in risk appetite and liquidation of risk correlated assets, developments have been even less attractive in the European markets with the Eurozone looking like it could be on the brink of collapse.

Relative Performance Versus the USD on Monday (as of 11:00GMT)

The flip-flopping on decisions towards Italian austerity measures has dramatically increased speculation as to whether the ECB will continue to buy Italian bonds, while in Greece protests have intensified with weekend polls showing an even wider opposition lead. Meanwhile, a piece in the FT in which the editor says that the worst of the Euro crisis is yet to come, has not helped matters, and all of this comes ahead of Wednesday’s critical German court ruling on Eurozone bailouts. One of the academics responsible for bringing about these court proceedings has gone as far as to say that the Euro is doomed and Germany could very well be back to using the Deutschmark by 2012. We think this view is somewhat extreme and definitely a stretch but at the same time, still underscores the serious lack of confidence in the region as the European financial crisis rolls on.

The market reaction to the latest wave of risk aversion has been rather predictable, with the US Dollar and other safe haven currencies relatively outperforming, while equities have been hammered, gold trades back towards record highs and oil comes under serious pressure. Furthermore, the weaker US employment data and troubled Eurozone economy are not the only source for concern, with Asian markets also very much under pressure on their own merits.

Australian investor confidence has slumped to its lowest levels since the first quarter of 2009, while Australian job ads have also shown deterioration to suggest a broader deterioration in the Aussie employment sector. This should continue to reinforce the newly adopted less hawkish and more accommodative stance of the RBA, and more color will be offered on Tuesday when the central bank meets. The OIS market is now pricing in a 26% chance for a rate cut at tomorrow’s meeting with rates projected to be 127bps lower by year end. Meanwhile, China data has further contributed to the downturn in global sentiment with services PMI tumbling to a record low 50.6.

In European trade, Eurozone data was on the whole better than expected, while UK services PMIs were weaker. However, the data in the session failed to materially factor into price action. US equity futures and oil prices are tracking a good deal lower, while gold consolidates its recent gains.

EUR/USD: The market still remains confined to a broader consolidation since April, with rallies well capped above 1.4500 and pullbacks finding decent support below 1.4000. However, the contraction in volatility over the past several months warns of a near-term breakout and given the more bearish structure on the monthly chart which suggests the formation of a longer-term lower top by 1.5000, we project the breakout to be to the downside. In the interim, look for setbacks to extend back towards and below 1.4000 over the coming sessions, with any intraday rallies expected to be well capped ahead of 1.4400. Next key support by the 1.4000 psychological barrier is significant as it also represents the 200-Day SMA. The market has not been below the 200-Day SMA since January 2011. 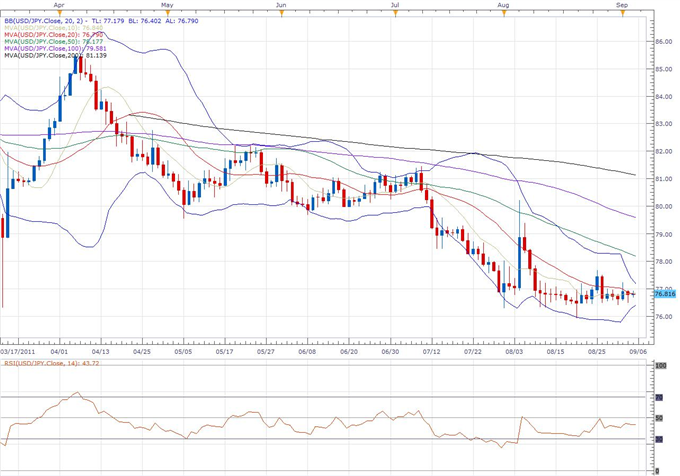 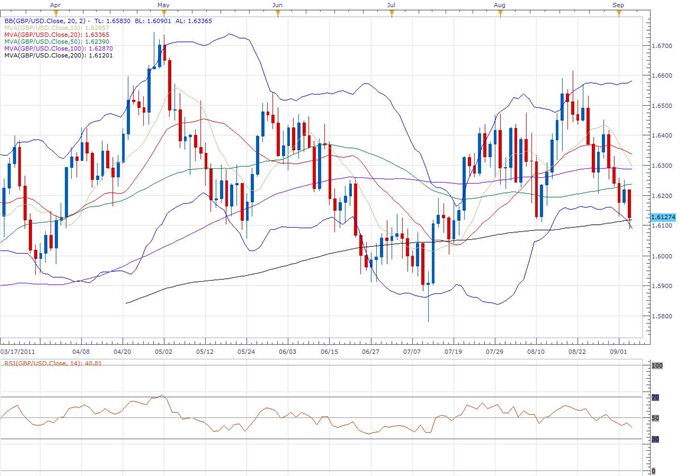 GBP/USD: The market remains locked in a broader consolidation off of the April highs, and a fresh top is now sought out by 1.6600 in favor of the next downside extension back towards the recent range lows at 1.5780. Ultimately, only a daily close above 1.6550 would delay outlook and give reason for pause, while the latest daily close back under 1.6350 should accelerate declines. In the interim, look for any intraday rallies to be well capped below 1.6400 on a daily close basis. Back under 1.6110-20 accelerates with these levels representing the11Aug low and 200-Day SMA respectively. 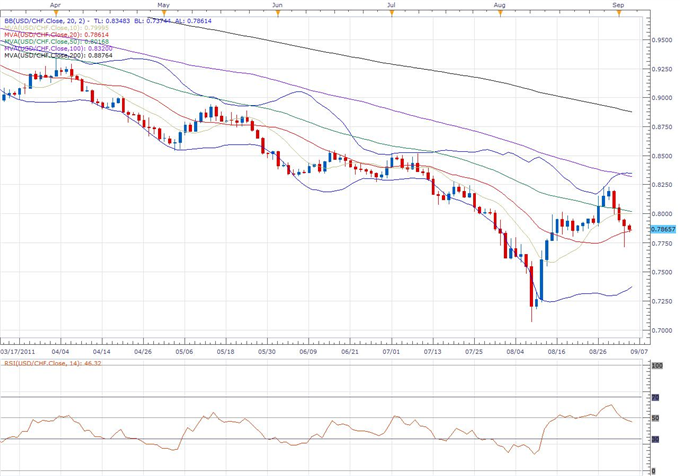